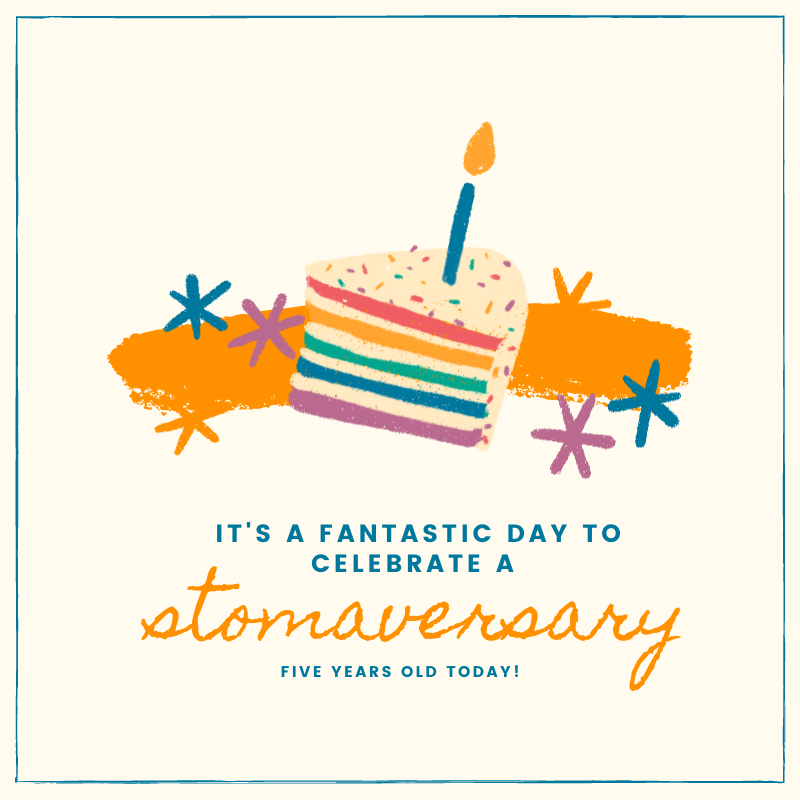 Year Five with Pricilla started with hernia repair surgery. So technically, Pricilla lasted for four days into her fifth year and then she got reborn – aka, she was refashioned!

I won’t lie, that surgery was tough as anything. I didn’t know exactly what I would wake up with because so much of it depended on what my surgeon found when he opened me up. I had both biological and synthetic mesh placed into my abdominal wall to help support my stomal area and my actual stoma’s function. And so far, it’s been really successful. I’ve not had a reoccurrence – touch wood, fingers crossed! – and things look good on the surface too.

It is very odd to think of just how bad it was before surgery. This before and after have really shown me how big it was.

Despite a lot of surgical issues this year, my stoma has been the least of my worries – which is exactly how I like it. I want to be able to get out there and achieve my goals, ambitions and dreams. One big goal of 2020 was to complete Lv2 AAT before the end of the year and I did so! I really smashed my final exam and got a Merit overall.

Three quarters of 2021 later and I’m already at the same stage I was at the end of 2020 but the next level up. Most of my success has come from planning and getting my stoma into a really good routine. So much so that I can predict my changes better nowadays and I am flexible about what I can achieve in one day.

Beyond surgery, my IBD has been playing up, needing some procedures to rule things in and out of diagnosis, to finally go back on Vedolizumab. It was a long wait for tests such as my MRI and ileoscope but my nurses made sure we had the next steps already ready to go so that there was not a delay in treatment when we got the green lights.

Going back on infusions has been weird after almost two years off and during the pandemic. Luckily, Veodlizumab does not leave me immunosuppressed, just have to be careful as I can get more side effects after a long period of no medication. So far, it’s only been joint pains that we are proactively managing. Stoma wise; everything is good! Routine is good, I’ve gotten so much more confident with my stoma and all the things that come with it, and I think a large part of this is due to my new stoma – Pricilla 2.0 – is easier to manage. It’s made from higher up small bowel which could have made it more problematic but the actual formation has been superb.

Going into my sixth year with Pricilla makes me feel so glad I took the change of a stoma back in 2016. Even when my proctectomy was fraught with post-op complications – and even now with this drain in situ – I know I made a good decision. I’ve now had my stoma for half the time I’ve had IBD and it’s been a different journey but one which has really challenged me to grow. And I think that’s been my biggest takeaway from things in Year Five – I went after what I wanted and did not stop. I did not let my stoma or my IBD hold me back.

But what did the next twelve months have in store for me?

Here are the Ostomy category highlights:

Experimenting and Exploring Food with an Ostomy – 20.01.21