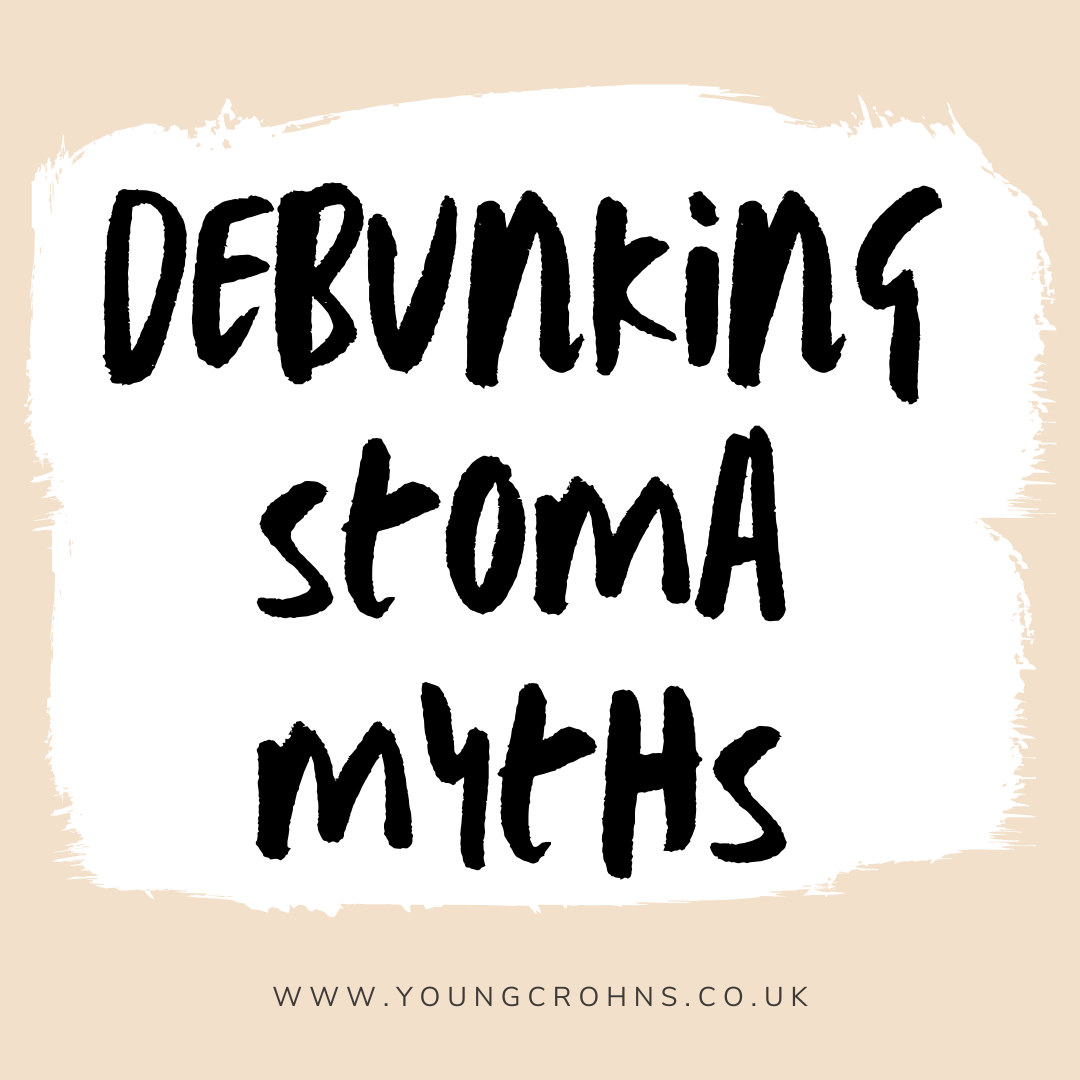 Last month I wrote about ‘Assumptions About IBD & Stomas‘ where I discussed how there are many assumptions and myths surrounding IBD and having a stoma.

Assumptions are usually founded on false information, historically based in the past. While they might have some facts to them, they are usually warped beyond the reality they belong to right now.

For anyone who might undergo a stoma surgery in the future, or requires one as an emergency or in the very near future; it can be a very daunting process, somewhat guided by these myths. I’ve found – as an ostomate myself – that these ‘myths’ are said by those who have never seen, experienced or know about stomas.

For all the ostomates I know and have met, they do not fuel these myths, they are trying to break them down by telling the truth. It’s part of the #ostomyawareness movement and for us, it’s a part of our daily lives. So here are my breaking down of these myths.

I’ve had all of these quotes said to me throughout the last five years of having a stoma. For the most part, I’ve been able to find a way to respond, but in the very early days of having my stoma – when it was weeks or months old, when it was causing me sore skin and I struggled with self-confidence and body image – they were very hurtful. Please be kind.

There is no one ‘look’ of a disability. And the image that I present to the public is not going to reflect what is going on below my clothes.

“So you’re all better now you’ve had surgery?”

For the most part, yes. But surgery is a huge undertaking and it comes with risks and possible complications. Sometimes, despite all the best efforts of me, my doctors and surgeon, complications do occur and I have to deal with that. That can be short term or long term.

And unfortunately, surgery – even a stoma surgery – is not a cure for my Crohn’s disease.

“That must be smelly / messy / noisy / disgusting to deal with”

Yes, they sure are, to begin with. I highlight that because it is new and different immediately after surgery! In the immediate period after surgery, your body works hard to wake everything up, including your digestive system. With a bag attached over the stoma, it will make noise – the new farting for ostomates – and it will be abit smelly because of the medications used in the operation.

The disgusting part is because it is new and foreign. But you soon get used to it and you learn to care for it as you would do with anything else new. This is just abit of my intestine hanging out of my abdominal wall. It will become normal for me and it will be clean.

“That must be painful and hurt”

A stoma should never hurt. The skin immediately surrounds it – called the peristomal skin – can become painful when it is sore and irritated by the products you use or the output from your stoma. You read about ‘Peristomal Skin Issues’ here.

A stoma is created from the large or small bowel, which has no nerve endings. I don’t ever feel my stoma, except when it is moving food through my digestive system which results in my output – called peristalsis – and it does not hurt at all. It is soft, squishy and warm.

If a stoma is painful and hurts beyond that it should really be an indication that something could be wrong and requires medical attention.

“You must have a limited diet now”

If anything, I eat a more ‘normal’ diet – aka as the general population is encouraged to, with fruit and vegetables, fibre, protein and the right fats – than I ever did before having my stoma.

A stoma is usually created to remove diseased or inflamed bowel. Inflammation or disease usually results in the patient having a bland and low fibre diet to reduce the risk of obstructions and perforations, as well as limiting inflammation to its original location. In IBD this is especially important, as aggravating symptoms can result in deep and long-lasting flare-ups.

I enjoy spice, nuts, vegetables, red meat in my diet now and can tolerate alcohol and carbonated drinks.

“This was an easy choice, must have been the easy way out”

While I did somewhat choose my stoma surgery, it most certainly wasn’t an ‘easy choice‘ and it is in no way a cure or permanent fix for my Crohn’s disease. It does give me a better quality of life – comparable to how much my life was governed by pain and my disease prior to surgery – but it comes with its own challenges and its own risks.

Some of these are peristomal hernia, blockages, reoccurrence of Crohn’s disease, phantom rectum pain, nerve damage, skin complications, prolapsed stoma, retracted stoma; all of which are, again, complications that come with the surgery.

It is alot to consider when you require this surgery.

“You must be symptom free now!”

I have spent half of my time since stoma surgery on medication to help maintain my Crohns disease. I will always suffer from low B12 – for which I require bi-monthly injections – fatigue, other deficiencies, dehydration, and the possibility of a flare-up.

Stomas can be great at resolving internal inflammation and removing diseased parts of the bowel. But they do no mean ‘no symptoms ever again’ – that is just untrue. For the most part, it can be really beneficial to have a stoma and it can really help with you feeling good during remission. But equally, it is an individual thing.

“You can’t shower / swim or bathe with a stoma”

Most ostomy bags are waterproof. Which means we do not have to remove them to shower. You can choose to remove them while you shower, its a personal preference. Likewise, as we shower or bathe with the bag on, we can also swim, using a sauna and hot tub, as well as sunbathe, run, climb, hike, or any other physical outdoor activity.

“That’s the end of your love life then!”

A stoma does not stop you from having a sex life. If anything, feeling well contributes more to pursuing or continuing a sex life with a partner than having a stoma bag does.

I’ll be speaking more about Sex and Stoma Life next month.

“You can’t have children”

As a woman with a stoma, there is nothing about having my stoma that will immediately interfere with having a child. A stoma does not pose a threat to pregnancy or childbirth. And for men, there is no interaction of the stoma with their ability to procreate.

Of the things that might stop or hinder your ability to have children, might be the particulars to your own condition and surgical history. But a stoma does not stop you from having children, per se. Obviously, it is more complex than ‘yes’ or ‘no’ so if this is something you are concerned about, it is worth discussing prior to surgery for options with fertility and family planning.

“A stoma must be the worse thing to have”

It is just different.

For me, having a stoma saved me from months of continued symptoms while I waited for medications to work – this was my other options, besides surgery. For me, having a stoma was a relief from daily pain, bloody diarrhoea and unrelenting fatigue. I was underweight, unable to eat and struggled to walk and talk. I was desperately ill. So choosing a stoma was sort of a quick decision – to be out of pain, primarily – but it had a long impact on me. It improved my disease for the first time in years.

So 18 months after my initial surgery, I had another surgery to make it my permanent way of life.

“I thought stomas were for old people and cancer?”

No, stomas happen to people of all ages and for many different reasons.

While yes, it is common for bowel cancer patients to be offered a stoma to remove tumours, bowel cancer prevention and diagnosis have greatly improved, despite it now affecting more people who are younger.

Stomas are used in other specialities as a course of treatment – including IBD, diverticulitis, bowel trauma, bladder cancer, obstructions and birth defects.

"Will you always need check-ups for your IBD?"