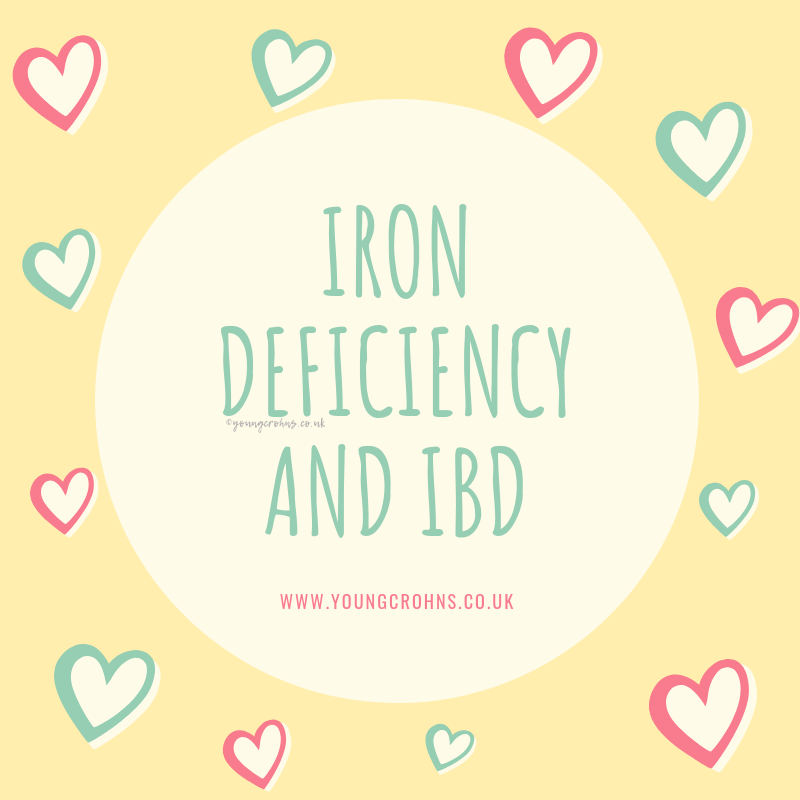 What is Iron Deficiency and what can cause it?

A lack of iron – a deficiency – commonly causes iron-deficiency anaemia (IDA). It occurs when your body doesn’t have enough iron to produce hemoglobin. Hemoglobin is the part of red blood cells that gives blood its red color and enables the red blood cells to carry oxygenated blood throughout your body.

If you aren’t consuming enough iron, or if you’re losing too much iron, your body can’t produce enough hemoglobin, and iron deficiency anemia will eventually develop. Most commonly, a lack of iron is due to low levels of Iron rich food within a person’s diet, which can be solved quite easily.

Causes of iron deficiency anemia include:

How is it detected in IBD and treated?

Anemia is easily diagnosed through a simple blood test; your GP will usually order a full blood count (FBC) test and this will find out if the number of red blood cells you have (RBC) is normal.  Often, anemia comes on very slowly and is not noticeable as it develops over a long period of time. It can take some time to treat anemia, especially if treatment involves iron or other supplements to spur the body to produce more red blood cells. In severe cases of anemia, blood transfusions may be used.

In IBD, IDA is more of an issue due to the poor absorption of vitamins and minerals that can occur because of inflammation or diarrhea. If the intestines can’t absorb enough iron, folate, vitamin B12, and other nutrients, the body won’t have what it needs to create more red blood cells.

Also, people who have IBD have a higher risk for blood loss. A continual loss of blood, especially in amounts that can’t be easily replenished by the body, can result in anemia.

The most common symptoms of iron deficiency are:

What does this mean in the short-term and then the long-term?

Iron deficiency anemia isn’t something to self-diagnose or treat. So see your doctor for a diagnosis rather than taking iron supplements on your own. Overloading the body with iron can be dangerous because excess iron accumulation can damage your liver and cause other complications.

Iron deficiency anaemia is the most common type of anaemia. There are others, like vitamin B12 and folate anaemia, which the blood test will also check for.

Most people with iron deficiency will be given an iron supplement to take orally or given iron intravenously. This will boost the iron levels in your body. Some people find they have side effects from taking iron supplements – such as cramping and constipation.

You can also increase iron intake through your diet by eating the following foods:

Your body absorbs more iron from meat than it does from other sources. If you choose to not eat meat, you may need to increase your intake of iron-rich, plant-based foods to absorb the same amount of iron as does someone who eats meat.

Throughout the early months of my time with Crohn’s disease, we tested me for most things but it seems anemia slipped through the net as my issues were more about my CRP and my insides. We didn’t know I was suffering from IDA until I came into my first proper clinic appointment with my GI – and by this I mean, this was the first time I wouldn’t be admitted from clinic or have more pressing issues, it seems the Humira, at this point, was keeping me ‘stable’ – and we did ALOT of blood work to see why I was so tired and just struggling. I had returned to work a few months previous and that was tough at times. I put my tiredness down to that for the most part, but no, I was also anaemic and we needed to treat it.

I would have one iron infusion which would last all day. And since then, I’ve never had my iron levels investigated and treated because I have good iron levels. My PCOS probably contributes to this as I have been on a contraceptive device which stops my periods and I never suffered with blood loss when I was flaring.

I would go on to have blood transfusions after my ostomy surgery due to blood loss and whilst that was terrifying, I was relieved that my levels would improve and my general health post op was good too.

Probably twice a year my iron levels get tested, so I know they are monitored; but I tend to eat my iron levels as well as taking a supplement. I know that sans colon, I will always need to eat my nutrients instead of taking supplements because I have absorbtion issues.

I’ve written about my experience with IDA. Here are the ‘collection’ of posts:

GI Clinic – 06.03.12 – Where we first looked into my iron levels, six months or so after diagnosis and I was ‘stable’

GI Clinic – 15.05.12 – We finally got my results, they were low and I needed an infusion and then a retest; amongst other things

Have you been diagnosed with IDA? What treatment did you receive? Is it regularly monitored?

Very Well – Anaemia and its Relationship with IBD