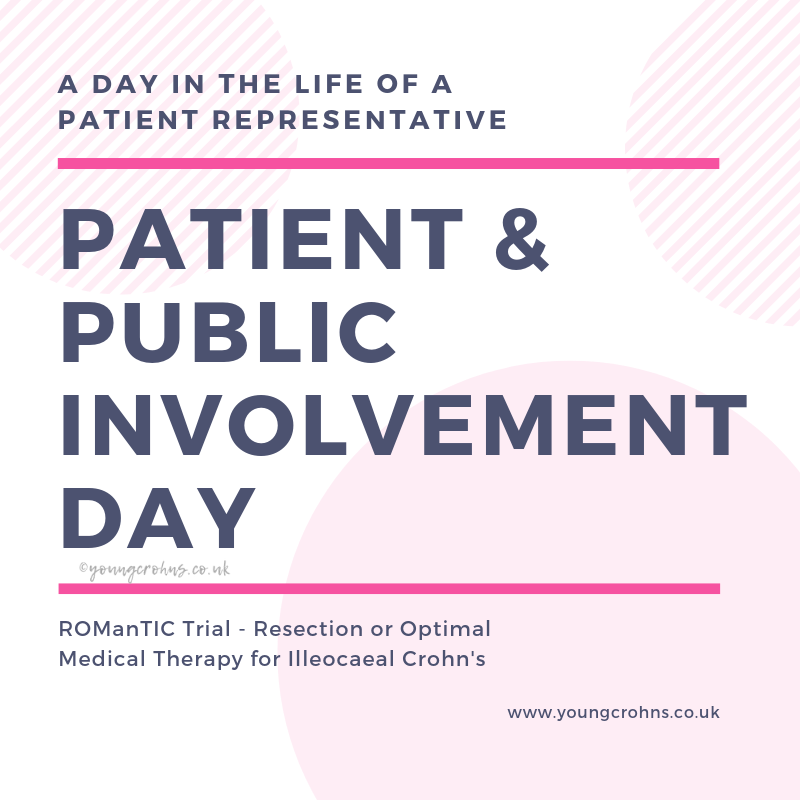 Two weeks ago, I was invited to the Royal College of Surgeons in London for discussions of a new trial for Ileocecal Crohn’s patients.

This has been the first time I’d been invited – well, I had sought out this day for my own medical geeky-ness – to participate in something so formal and important as a possible trial. Its objective was to gain the perspectives of both patients and doctors in to whether the premise, the thesis of this trial, was valid and if it was, how it was then going to be done and its hopefully outcomes. I was very interested in the prospective outcome – increase in Quality of Life and improvement in care and some possible standardisation of care.

What I came away with was the feeling that I was valid. That my thoughts, feelings and experiences of having Ileocecal Crohn’s Disease are important.

It was humbling to be in a room with other people who are part of that exact same process; patients who have tried medication and had surgery. Patients who has just begun life with Crohn’s and on medication. Some who were years into this and on the same, good medication. Those who had just had surgery. The cross-section of patients was great, thanks to The Bowel Disease Research Foundation’s recruitment.

So were the medical professionals involved. Gastroenterologist, colorectal surgeons, radiographers, trainee surgeons; the wealth of knowledge was huge. The potential for knowledge was there. The thirst for answers was definitely palpable. And the fact that these people – doctors in the top of their field, those training to be amazing doctors – had given up their time to be there – like the patients had too – to help gain some insight in to how improve care for these types of patients. It is wonderful to see care and attention being given to IBD – Crohn’s here specifically – and not on finding a cure but on developing strategies to help all patients in a variety of cross sections – so those who are perianal, small bowel, terminal ileum, those with fistulation, those with extra manifestations. Care is being taken to improve both medicine and surgery. Care is being taken! That is key.

SIDEBAR: For me, I had always been afraid of surgeons. Maybe the years I’ve spent watching of Grey’s Anatomy hasn’t help me – or has it, in a weird way?  – but surgeons just want to cut’, will do anything to get that opportunity, have to remain distance from their patients. But realistically, their training is exactly like regular doctors; the level of commitment, care and attention is there, right from the very beginning. Surgeons don’t just ‘become’ surgeons overnight and the most certainly don’t do it without having a lot of desire to operate. I’ve experienced that first hand and I’ve now experienced it here; away from my own hospital, with new colorectal surgeons who have patient care at the heart of what they do, every single day. My perception of them has changed.

PURPOSE OF THE TRIAL

Stated as “ ROManTIC is aimed at working out the best treatment for patients with Crohn’s disease affecting the junction between the small bowel (ileum) and the large bowel (colon). Both medical treatments and operations on the bowel are currently used, but no-one knows which is better, or which types of patients will benefit from each of these treatments.”

We were asked a simple question:

If given the chance again, would you have liked a surgical option in addition to your medical options upon initial diagnosis?

Statistically, about 40% of Crohn’s patients have an issue in the terminal ileum. It is thought to be the main source of why medications tend to fail and the most likely cause of bowel resection. Currently, both medications and surgery is used to remedy this particular portion of the bowel, but no one can agree on which one works best and which patients benefit most from intervening with surgery sooner. Some patients respond very well to medication, where as some suffer with side effects and problems, ultimately resulting in a resection anyway. This trial would help medical professionals determine the best treatment plan for Ileocecal Crohn’s disease patients.

WHO WAS GOING TO BE INVITED?

Ideal candidate for this trial is going to be someone who has been recently diagnosed with Crohn’s disease isolated to the terminal ileum, who is currently taking steroids but needs to be moved off them and onto something else. Here, the trial would be offered; explaining that medications for the condition can work and so can a bowel resection. Both come with risks and side effects; all of which would be explained, with a Gastroenterologist and a colorectal surgeon present so that both sides are given equal validity. It is then up to the patient to decide on if they would like to enter the trial. It is important to stress that the patient does not get to choose medication or surgery, that is to be assigned randomly; consent to the trial is being acquired at this stage; of course, with time for the patients to consider what this undertaking would be.

The trial is for twelve months, hopefully gaining 246 patients in total to help gather information about how to best treat Ileocecal Crohn’s disease.

WHY IS THIS IMPORTANT?

Well, ultimately it is a significant aspect of IBD care and management. It is something that knowledge is needed on, going forward; not just for a couple of years’ times, but for future generations too. It ultimately comes down to which out of medical or surgical gives the patient the best Quality of Life after twelve months. The data gathered will analysis that primarily but hopefully provide insight into improvements in other aspects too; possibly into some standardisation of care and into sharing best practices on a larger scale.

I have had Crohn’s Disease since 2011 and in that time, I’ve had every IBD medication out there, thrown at me. I believe it stands at 11 tried and failed medications, where I ultimately had a Right Hemicolectomy to remove my terminal ileum and some small bowel in May 2016 and then my colon removed and permanent ileostomy performed in August 2016. I consider that a lot to go through, in such a short space of time. I do not regret any of the decisions my IBD medical team made regarding my care, which included second opinions and referrals to other specialists for related issues. What I do have issue with not being able to see a colorectal surgeon sooner. Yes, on the one hand, why tempt fate and ask questions which are completely hypothetical if you are no way near close to needing surgery to fix your bowels. But, why not be allowed the opportunity to ask questions directly to a surgeon? Would this be considered a waste of time? Who knows. I feel very strongly that I would have liked to have more inclusive team on my case from the very beginning; including a colorectal surgeon.

So, I am not pushing for surgery over medication – I believe both have their validity and its down to patient’s choice – but in order to make a choice, you need all the facts. If you know anyone who would be interested in taking part in this trial, do get in contact with the Bowel Disease Research Foundation for more information.

Disclaimer: I was asked to the RCS by BDRF as part of their Patient and Public Involvement obligations. I have since been recruited as a patient representative for this trial. The views reflected in this post are mine and information collected from the presentations by the trial authors on the PPI day.

Stoma Nurses; What makes them so important?