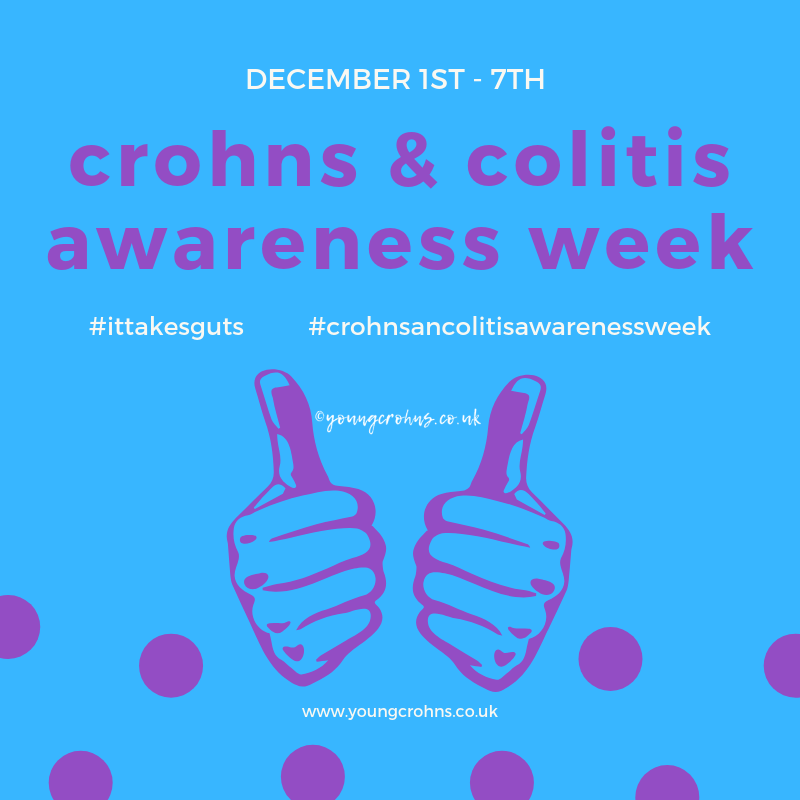 Part of the week of daily blogs for #crohnsandcolitisawarenessweek Read the entire week here. I went through all medical options before I turned to surgery to help my IBD.

But then I remember the life I was living prior to surgery. About how I was loosing weight, I was in pain every time I ate and I could not stop sleeping. Then the bleeding happened and I knew surgery was right for me.

I ended up having two surgeries within 3 months of each other because I just didn’t really recover from my first one. I spent the time between surgeries, in and out of hospital constantly – 5 admissions in 12 weeks – each time chipping away at the progress I was trying to make: a bowel infection, a bowel leak, a suspected flare up, BAM, then ultimately, my colon just became so inflamed it needed removing. I succumbed to a stoma surgery but I was grateful for it. I still am, even when it’s a bitch to change or cope with. I’d rather spend my life dealing with output than a bleeding colon.

Surgery was never mentioned to me when I was diagnosed. It was spoken about, very quietly in hushed tones; because medication would help me. And I did believe my consultant, I did believe my IBD nurse when she instructed me to give myself my Humira injections in my thin and bony legs. I believed my team when we discussed moving up the scale of IBD treatments because my body wasn’t responding like they had hoped. I spent more and more time in hospital – as an outpatient – to get my disease under control.

I wonder if surgery at that point would have left me with more options now?

I wonder if I wasn’t so scared of surgery back then, I would have been more level headed in trying new things, instead of feeling a sense of doom of ‘What else can go wrong? What else can we do? What do we try next?‘ when my medications failed me.

Seeing a colorectal surgeon definitely put some fear in me. It felt like my consultant was giving up and passing me to the people who liked to cut. And sadly, that reputation precedes them, in many cases. I did not expect the care or compassion my surgeon showed me on my surgery date, nor in the follow-up, nor in the multiple admission I had before my ostomy surgery. I always felt looked after when he was there. He was a force to be reckoned with and I admired that a lot. He could fight for me when I was weak and unable to fight. He always spoke directly to me, as if it was just me and him in the room. He made me feel included. It was my body, my guts, my decision, my life I would have to live after.

Why is surgery feared so much? Am I alone in this historic feeling?

Right now, I sit on the cusp of needing more surgery. And this surgery is elective and is something I am pushing for. I never would have been this person three years ago – I was shocked and scared at the prospect of being opened up and my insides moved about. But now, I welcome that. I need something to fix me and whilst surgery can benefit me, I know that surgery is not just about cutting out the bad and that is that. I know that alot of what happens in recovery is down to the patient and their outlook. I bounced back after my stoma surgery – I was without an inflamed and angry colon for one – because I knew that this was going to improve my life. I had to take a chance, risk it and commit. I intend to do the same with this one, next year. It won’t be easy but it never is.

If we can change the perception of what IBD surgery is, and what it means to have it done, maybe it can be offered as something instead of medication. I do wish I had surgery a little sooner, so that I could have use Infliximab again. And whilst surgery is a last option for some, it could be a treatment plan for others, sooner than last chance saloon.

“Adding scars to my body in order for a higher quality of life.”

London: for Business not Pleasure