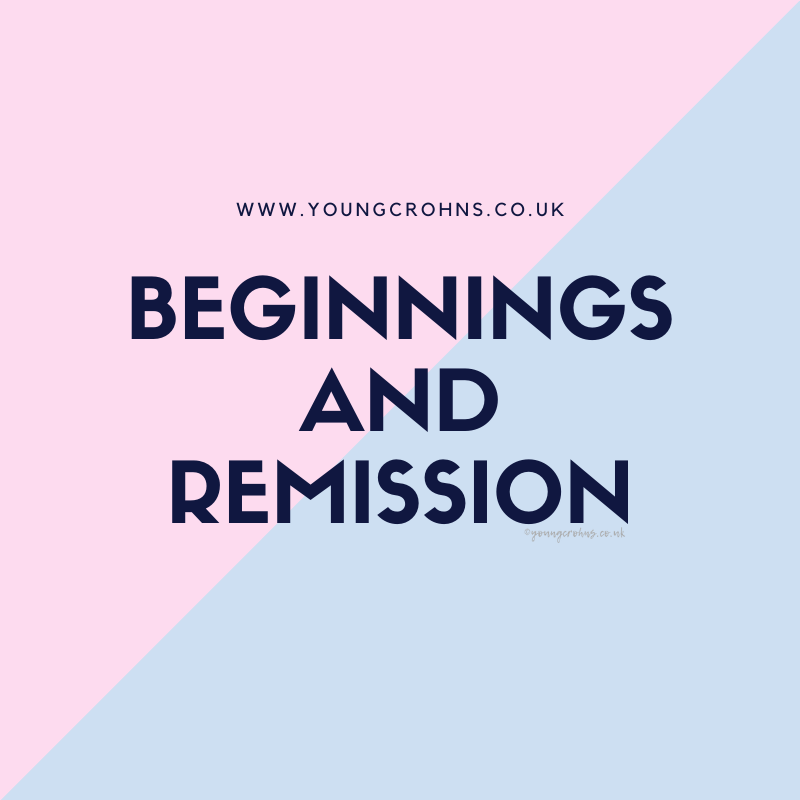 It seems to flow nicely, that sentence, doesn’t it?

Of course, most beginnings don’t present themselves or occur so succinctly as a new calendar month, let alone year. Which makes a new beginning at new year, feels too neat for my sceptical mind. And even more so when this new beginning is around the topic of remission.

The festive period always struck fear in me, especially in those newly diagnosed years of having IBD. But the last couple of years, since surgery and living with my ostomy; I’ve relaxed abit more. I’ve been able to enjoy the festive period and even have had time when I was symptom free.

And there was an emerging pattern of finding some aspects of remission during those periods too, much to my surprise.

Even more so this year, when so much change has occurred and I’ve yet to find out how this’ll pan out.

To the start of 2017 when I was not six months out from my ostomy surgery and just finishing up those loading doses of Vedolizumab. I had an reply from my IBD nurse at the time about my latest CRP and Calprotectin levels; they indicated some deep remission of symptoms. The overwhelming feeling of relief of being better was incredibly strong but then so was the fearfulness of still needing to pace myself. Remission didn’t mean cured, and it certainly didn’t mean that I wouldn’t flare up again. I wondered; what would a flare up look and feel like with a stoma? How would I manage this? I’d gone through the heartache of a huge post op flare up the summer before; I didn’t want to go through that again.

Despite my cautiousness, that Spring I went gung-ho and got a new job, relocated and began living like a ‘normal and health’  adult. I had to find a new GI in my local area but I wasn’t too stressed or pressed to do this. Until we got to July and I flared hard.

My initial feelings about ‘coming off the radar‘ so to speak, were confusing. A big part of me was really thankful to be without my medication; it had me tethered to the hospital outpatients department on a monthly basis and while it gave me experience of being a ‘regular flyer’, I did want to distance myself. And after a while, you do get used to and into this routine; some thing which I started to miss. The gap was begin to be filled with panic and I began being more controlling about other aspects of my life – If I could just control my diet / exercise / sleep / energy levels / etc I could control a flare up from occurring. It was a strange head space to be in.

And being medication free was something that I didn’t really aspire to. I was stuck in the impression that while my disease could be controlled by medications, when I was without them; I was in worse shape. It was somewhat inevitable that I would always take a / some medication to help my Crohn’s disease level out so that I could live the best I could. And even that, was a juggling act. So, I never really wanted to come off anything, I was scared of being sicker.

Each step forwards and backwards between remission and flare up teaches me things.

Remission is a word that has a certain connotation, and that isn’t particularly helpful in most cases of IBD. While being very individual, IBD is difficult to predict when it will flare up again – it would be next week, it would be next month, next year, the next decade; no one really knows. Some get sicker quicker than others, some present with little to no symptoms on the exterior but inside its another story. There is so much subjectivity; ‘remission’ is tricky to use.

So, for me; right now, I am in remission.

I take no medication for my Crohn’s.

I have little to no abdominal pain and complain of no vomiting, nausea or diarrhoea.

I haven’t felt this well in a long time. After the proctectomy surgery last March, I was unsure if I could get here but without a rectal stump; things are good. The best they have been since 2017. And while remission is never a goal or aspiration for me, I will take it. Periods without needing medication will come and they will go. Right now, I am enjoying letting my veins heal from all the cannulations I’ve had in the past two years and hope that my next batch of medication is at home injections!

Where do you stand on remission or even periods when you can go without IBD medication?

Coming off ‘The Radar’

Being Medication Free: It’s Effects on my Body

Going Medication Free…? Is This *The* IBD Dream?