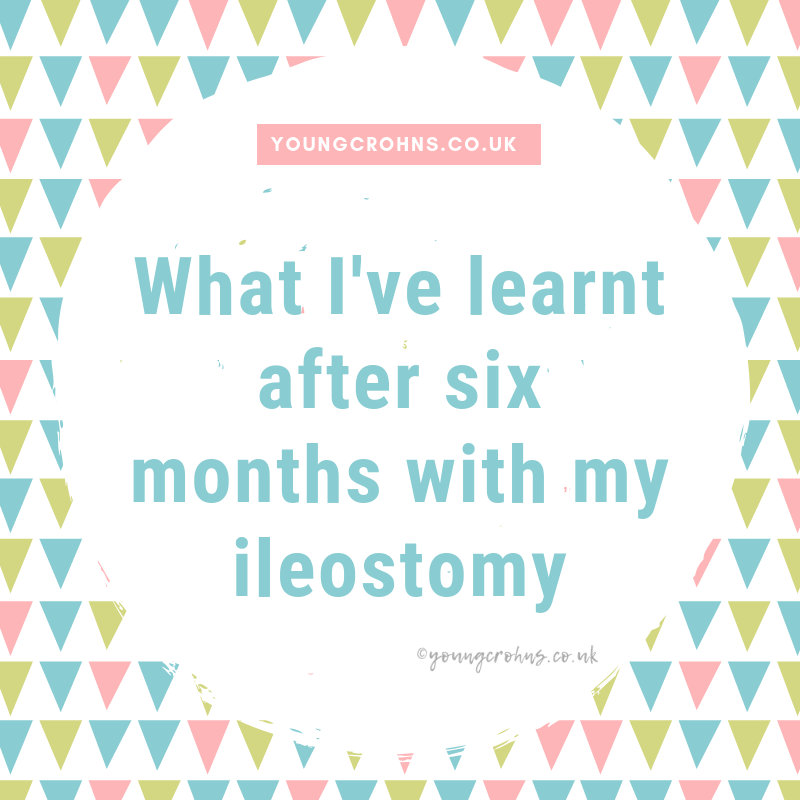 “I’ve learnt that this learning experience isn’t over and won’t ever really be over. And that is okay. I am fine with these challenges because I know I can do them, whatever my stoma throws my way.” Extract from my November post “What I’ve Learnt After Three Months with an Ileostomy”

Six months. Half a year. It feels and sounds like a huge amount of time. And to really sit and think about what I was doing six months ago – lying in a hospital bed, attached to so many tubes, waking up from surgery to create a permanent ileostomy – blows my mind. Has it really only been that long? Its gone so quick.  But those few weeks after surgery, time would stretch out and I would be considered the hours and days. Now, its more about weeks and months.

Learning about my stoma isn’t ever going to be over. And that is okay, I accept that challenges will always come my way.

The months from three into six have been about is getting back to full fitness. This has meant doing the following:

That isn’t to say I haven’t struggled.

I had a stomach bug at New Year which meant seeking medical advice during the festive period. It was doable but not without its challenges. After a week of being unwell, I was on the mend; carefully noting just how much having a ‘normal person’ sickness affected my stoma. Noted.

I’ve been trying to not let my head rule my body. I’ve been slowly accepting what is normal for my body to do now – ie, feeling the output coming out of my stoma, be it thick or more liquid – and not panic. In this vein, I’m trying to ignore my stoma sometimes. Let the bag fill abit more and just get on with life without fearing a leak. I’ve also improved my appliance change routine too – adding in more time for applying barrier products and warming my bags flange to help with adhesion. This has led me to having hardly any leaks between changes.

Time has been a great healer in my scar. It still pulls and itches but its now localised to the tissue that was recut from my surgery – at the top of my incision. Its still pink but it’s a long, deep scar; compared to my laparoscopic scars from the right hemi-colectomy. Those has faded into a light skin tone difference, so with more time, my ostomy surgery incision will be like this too.

My goals for the future haven’t changed. I still want to experiment with my products, bathe without my bag on, do a photoshoot and get back into some sort of ‘sport’. Those are still in the mix but being a permanent ileostomy, I know I have time. I do not need to rush. I am enjoying being able to eat and eat well, without pain. I am enjoying being out in the world, proud of having a secret from anyone who looks my way. It’s a comfort that a bag of shit on my belly is a constant reminder of what it has taken to get me back to being me.

I’m sure there is a lot more of ‘me being me’ to come out. Embracing my differences, my body and being confident about it is what I’m hoping six months into the year mark is about; just as summer comes around!