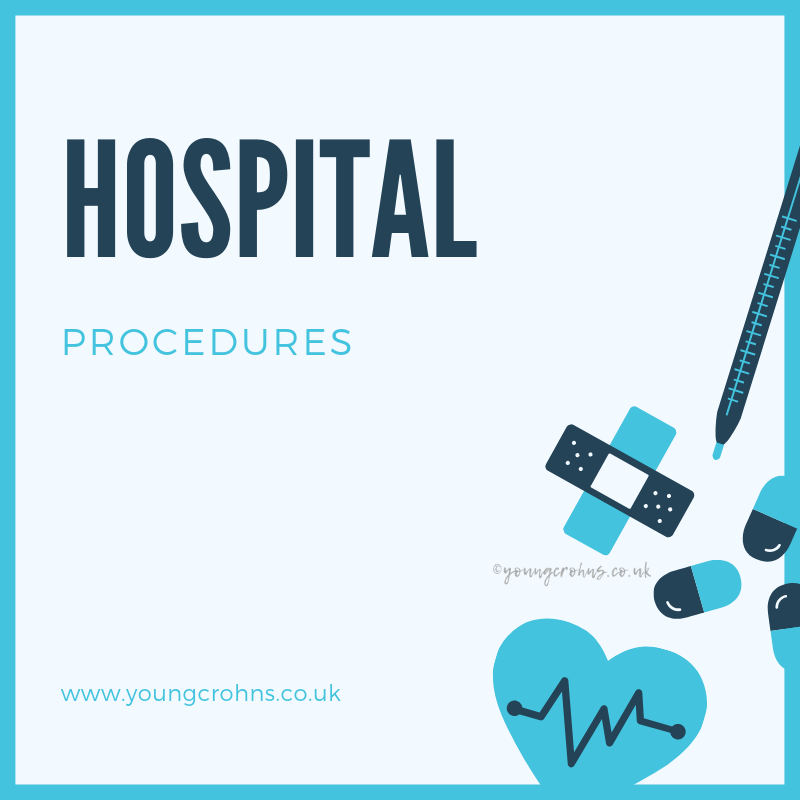 The information below is taking from the patient packet received with my appointment letter. Please contact your own hospital for information on this procedure, if you are requested one, as information can vary between NHS Trusts.

What is a colonoscopy?

A colonoscopy is a technique to look directly at the lining of the large bowel (colon) to try and find out what is causing your problems. A colonoscope is a thin, flexible tube with a bright light on the end. This tube is passes through the back passage and into your bowel. It allows samples of tissue (a biospy) or removal of a small warty growths (polyp) to be taken painlessly for testing later.

What are the risks associated with this procedure?

What are the benefits of this procedure?

Your doctor has referred you for a colonoscopy in order to investigate some symptoms you have been having, such as a change in bowel habit, rectal bleeding or to review a problem they may have found before, like polyps or colitis. This will benefit you by providing a clear diagnosis.

What are the alternatives to this procedure?

Colonoscopy is the only method that allows direct inspection of the bowel wall. In less than 10% of cases the whole large bowel may not be seen and may require another test. Other forms of examinations include barium enema, Computer tomography (CT) scan and a newer technique called virtual colonoscopy.

I ended up being awake until midnight dealing with the Moviprep aftermath. I slept until 6am and then my bowels kicked off. I felt nauseous, so very nauseous. I wasn’t even looking forward to some tea and toast after the procedure. I was worrying about how much they were going to struggle to get my cannula in and how much it as going to hurt. I wasn’t wrong.

I got collected and dropped off at the hospital’s treatment centre early; so once I was admitted, changed and calling into the procedure room, it was all running on time. Until they realised I was having a full scope, not just a flexi sigmoidoscopy like my paperwork said and needed to be cannulated. I was trying my best not to shake; I was so nervous because all I wanted to do was back out of it and go home and feel sorry for myself. The prep for a scope is rough and anyone who has to have a colonoscopy should know that that is horrible. I can’t even sugar coat it. Having not had one for over two years, I’d forgotten how bad it was. Just awful. But I stuck it out, let them try four times before they got a good vein, knowing I could now have my sedation and ‘enjoy’ the procedure now. Hooked up to oxygen and being monitored, the doctor pushed the full dose of Fentanyl and some of Midazolam and began.

I won’t lie, it hurt. He decided to go and explore my terminal ileum first – being the furthest away, this makes sense – and it was deeply ulcerated. He managed to get the scope 20cm into my small bowel and it was much the same. He took pictures and biopsy samples for testing but it was inflamed, angry and generally bad. Now I know why that side of me hurts so much every day! Phew, it’s not in my head.

He then had to remove the remaining prep – I was disappointed by this, I thought I had done a good job with my end of the procedure, but there was some liquid stool they have to suction and remove. That was very uncomfortable and strange – and moved back down my colon. I had to move around – which was abit labored under the sedation – and the nurse had to help get some pressure on my sigmoid – ouch! – at times, but he saw no wide spread inflammation like I had anticipated. In fact, 90% of my colon was fine; just a few patchy areas of small Crohn’s ulcers. Even my rectum was disease free.

Recovery took ages. I had so much trapped air and pain, I spent 90 minutes in there before I felt ready enough to eat. To avoid a mess, I had to keep getting up to get rid of the air in the bathroom. It was so uncomfortable. I’m very skeptical about having another one done. I know why I always agreed with MRI over scope, more clearly than ever.

I had a long nap during the afternoon whist at home; I don’t even remember it but it’s taken more than the 36 hours expected to get back to normal. I suffered with dehydration the following day and I was very sore; noticing it hurt the most when I was laughing or had to sneeze. That was surprisingly horrible too. I also was still experiencing prep like bowel movements and pain; added to the fact I was still feeling intermittently drowsy and finding it hard to find the right words too. I now have to be referred back to my surgeon so he can determine what to do next. I also have to see my consultant again too. They are due to discuss my results next Tuesday at the Departmental MDT meeting and hopefully I know more after that; or at the very least have an appointment to see the surgeon again. I know my results will also go to Nottingham to Dr Moran and he’ll probably request me to attend his clinic too.

Now the results; I am confused.

I was led to believe from my MRI scan – the last one was October 2015 – that it was my colon that was in bad shape and my terminal ileum was showing signs of going the same way. Neither area was responding to medication and Vedolizumab was going to be a last ditch attempt to help. I was told that there was deep mucosal inflammation that may not be helped by medication, thus the referral to Nottingham and to a colorectal surgeon. But now they tell me that my rectum and colon are okay but my terminal ileum really isn’t. How can that be? What they will do next is unknown. I reckon it’s a resection now, not a panprocolectomy or even a subtotal colectomy as recommended in January. I wonder if he was basing that off my last colonoscopy which is 2 ½ years old, not the latest MRI…?

I am sort of glad. Things aren’t as huge or as scary as I once thought, but I am confused as to why this scope doesn’t match up with my latest MRI or even what was recommended at my surgical consult.

I have many questions for my consultant and the surgeon.

Moviprep - The Storm before the Scope