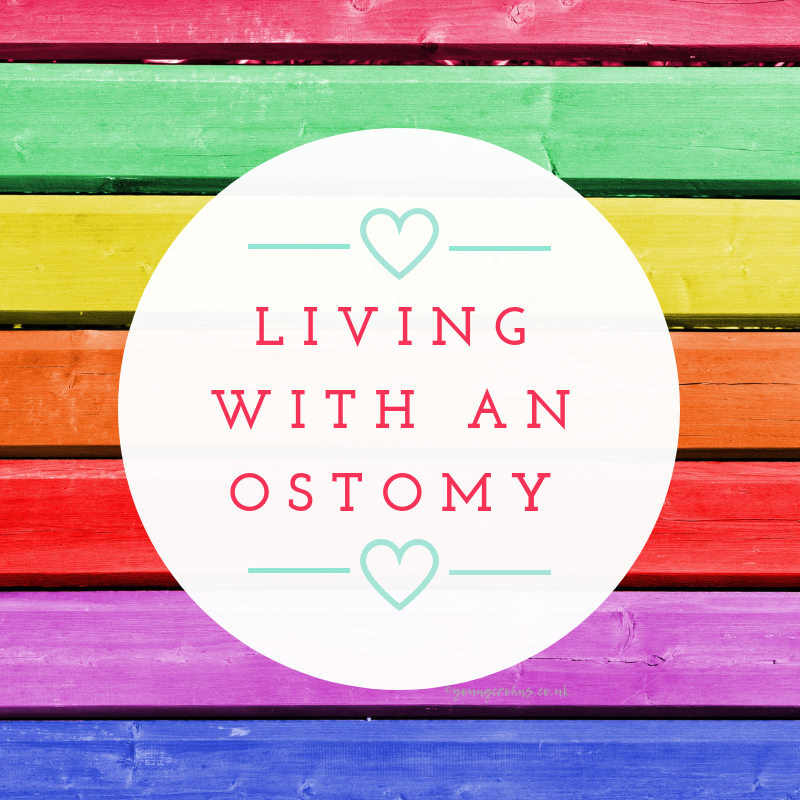 I had been through recovery before, knew that the groggy fog of the anaesthetic would eventually lift. But this time around I felt utter relief. I was confident this time that this was going to be a new life for me.
I felt around under my hospital gown for the scar, for the bag. The scar felt huge and like I had been ripped apart inside but in reality it was neatly glued together, all seven inches of it. The bag sat on my right hand side; I proudly touched it, flinching slightly at pain, feeling the outline gently, hearing the crinkle of the bag. I’m sure I had a smile on my face, it was hard to tell with the morphine. Despite that, I knew this was it. It would be challenging yes, but I was on a new path now, to a new life.

Through the haze of morphine, I can only truly remember the second day after my surgery. The first day – a mere eight hours after surgery has taken place – I can only remember being surrounded by nurses every time I opened my eyes, high in the air on my bed. Being tended to, aware that my mom was in the room at times, having my TPN reconnected, my wound checked, then my catheter; I noticed people being around.

The following day, I awoke to a new bag; someone had changed my surgical one at some point. The grey oval rectangle felt so foreign to me. Despite it being empty, it felt heavy. I had been well prepared for my ostomy surgery, knew what to expect but even still, seeing that bag attached my abdomen; it was a shock. There was no going back from this, I had to come to terms with it, physically, accept it however I could.

That was the one thing  no one but me could prepare for. How to mentally accept living with an ostomy. Having a stoma, in all its guts and glory.

A new stoma is very swollen so when it starts working you feel it.

After weeks without food, what was coming through my bowels, out of my stoma and into the bag was bile. Despite it being liquid, it hurt. My stoma was new, it didn’t know what was going on, nor did I.

With the pain I was in from the surgery, I was fascinated in how my body was now working. I did my best to look at my stoma through the bag’s inspection window, familiarise myself with it. I would watch it working and keep an eye on it. I would soon be allowed some food to test it out more, learning how to look after it was just beginning.

I could feel the output hitting my skin and it was irritating it straight away. I knew I had to change the bag, and I had to do it alone. I’d only changed it once before now; with the stoma nurse, I had to put my big girl pants on and get this done! I needed to protect my skin from damage.

The routine of changing my bag was strong from the get go. Testimony to my SCN for her advice and support, despite our first rough encounter, three days post op.

I was disconnected from TPN so I gathered my stoma bag and made my way to the bathroom. I was feeling okay but weakness was my biggest issue. I could not stand up for long. I was panicking that I would faint again or collapse in a heap, shit everywhere. I pulled the cap of my adhesive remover shakily, unable to focus. What if I did it wrong? My call button was so far away! I took a deep breathe, sprayed my remover, took the bag off my belly; noticing the redness of my skin. I cleaned myself, cut my new bag, continuing to breath despite feeling dizzy from being upright. The output had a mind of its own; it took 15 minutes to get it calm enough to apply the new bag.

But I did it. I finally got myself sorted. Exhausted, I went back to my bed and promptly went to sleep.

Learning how to look after my stoma – proudly called Pricilla – wasn’t without its challenges. But as I got more used to her, the better I felt. The better I felt, the easier taking care of myself became. This was a deeply meaningful time for me; it has really helped me see things clearer. Never before had I wanted to be so proactive in my care, my decisions or my lifestyle.

I had a pretty smooth physical recovery from surgery. The mental scars were deeper. Realising that my surgery had actually happened, noticing how well I was now ‘sans colon’ was something I just didn’t quite believe to start with. I was always on tenterhooks, waiting for my body to fuck me over again, like it always had done. I didn’t expect such a smooth transition back into Crohn’s medications, then into remission and now into what I’m calling ‘The Med Free Zone’.

Waking up with a stoma is by no means an easy ride. Whether it is an emergency operation or a planned elective one, having one when you wake up from a surgery is scary. But you decide how long you want to be scared about it, by it, with it for. It is all in your own hands.

Diagnosis: How I Feel Five Years On...