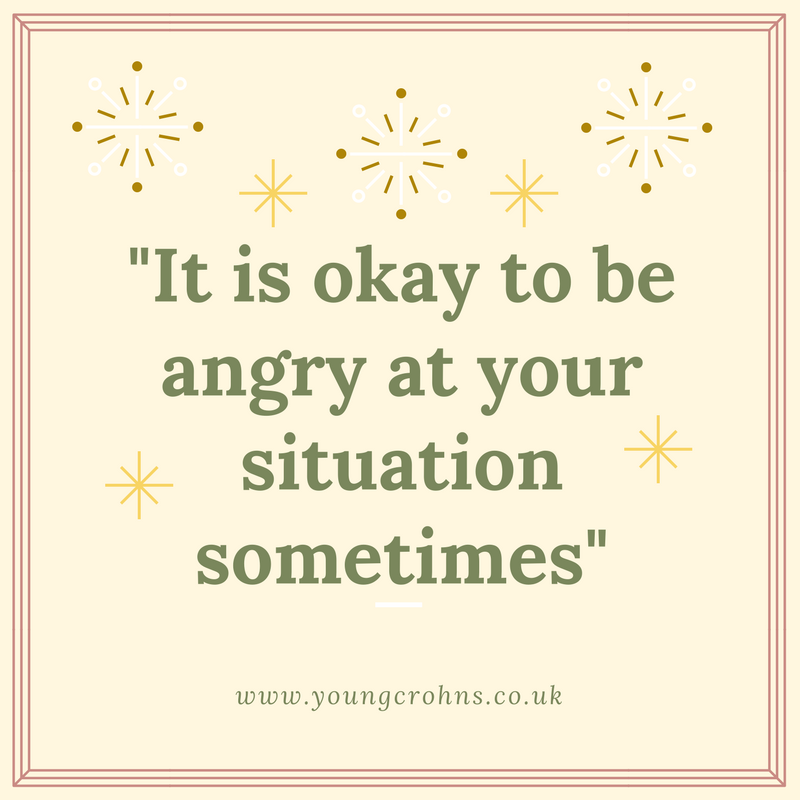 I feel some normality returning to my bones, some of my personality coming back. Some of my fight, a strong part of my need to write, seeping out of my fingers.

Sometimes you just have to laugh.

No seriously, you do.

Through wet eyes, I sat on my hospital bed, incredibly sad at the state of affairs I was in. This was my fourth admission in as many weeks, I was staring at the NG tube being held by the Sister and felt nothing but anger. I wasn’t angry as the tube, I was angry at me. I was frustratingly upset at the fact that I was here, yet again, having to endure something that no one else I knew had gone through.

PICC line, might need surgery, they would cut me open again, through my scar, ruining me more, possibly making me sicker, not quickly fixing me, I was stronger than this, why was this happening, wasn’t Crohn’s Disease enough, when I am very going to not be in pain, what was happening, how was I going to get this tube down, would I choke again, what else would I have to do…

I had a brave, wet smile on my face but I was petrified. I’d spent the majority of my days in hospital alone because I was either 90 miles away or no one was able to visit. And honestly, I relished the alone time. Yes, I was on my own, left to my own thoughts but it was those hours when I sat and let all my emotions wash over me; that I took some comfort in what was going on.

I won’t lie, I felt utterly negative throughout August. When I wasn’t in hospital, I was at home with my parents or my boyfriend. I wasn’t a happy person to be around. Everyone tip toed around me, unsure if I was getting better or just getting better at hiding my symptoms. For the majority of the time, I am ashamed to say it was the latter. I knew that I needed help and that would only happen if I got sicker. I needed to let the pain get worse, to warrant going back to hospital. I needed to be taken seriously and my body would help me do that.  So I let myself suffer.

NB: I would not advocate letting yourself suffer. It was a foolish mistake. I was stuck between seeking the comfort of my old hospital and trying my new hospital who, of course, did not know me or my disease. I struggled to play the system and went running back to what I knew. It was a situation I don’t want to have to experience again. With hindsight, what would I do? I would seek getting someone else to advocate for you, if you are too unwell to do so. Always have someone who can fight your corner, in desperate times.

It wasn’t until it was agreed to seek the funding for my Vedolizumab again that I started to feel positive again.

That feeling of finally feeling validated was beyond comparison. As shocking as the conversations leading up to “needing to go back onto medication” were – I felt everything from disappointment to shock, back to guilt and confusion – nothing beat knowing that this was what was meant to be. And that feeling took me by surprise, completely.

After weeks, if not months of feeling unwell; knowing deep down in my guts that I was sick again, I finally had my answer.

After all that time of medical professionals skirting around the issue of my Crohn’s being back again, after all those moments of feeling helpless and unsure, some resolve was rising within me.

It is okay to be angry at what you’re being faced with.

I was angry when no one would take responsibility for delivering test results and building a plan. I was so angry that I was expected to advocate for myself when I felt so unwell and so incredibly alone. I was angry when it was suggested I was drug seeking because I knew the specific medication and dose I needed to not be in pain. I was angry at how easy it was for my concerns to be dismissed or even ignored.

But my anger was deflated – flattened in fact – when they confirmed two new patched of IBD inflammation in my small bowel. When they confirmed dilated bowel, an obstruction, and it was likely down to my disease pattern and surgical history. I felt betrayed by my past decisions. I started doubted my ostomy, my choices to relocate, my job, my lifestyle; everything.

I hated what my disease had done and was continuing to do to my life.

It’s unpredictable nature; came back full force. Sweeping me off my feet, knocking me sidewards.

And that unpredictability is what I struggle to deal with, on a daily basis. I’d lived the first six months of 2017 in a blissful bubble of being “in remission” without any medication, without the need to see the parade of doctors and nurses that I once did when I was “sick”; forgetting that my IBD had not be cured by my surgery. My ostomy has changed my body forever and it’s continuing to change my life; both positively and sometimes negatively. I deal with this, as best as I can, but I still struggle to cope. On the surface, I look healthy and well; but IBD runs deeper than that. And feeling angry at that sometimes, is what I have to have to feel.

I sometimes feel guilty for not always feeling positive about having to shit into bag on my abdomen. Yes, its made a hell of a difference to my disease but it comes with its own challenges and obstacles. And I won’t lie or hide what those are. But, I pick myself up. I fall down – who fucking doesn’t with this shitty disease or a stoma?! – and rise once more. Hopefully, higher and stronger than before.

The Return of... Everything