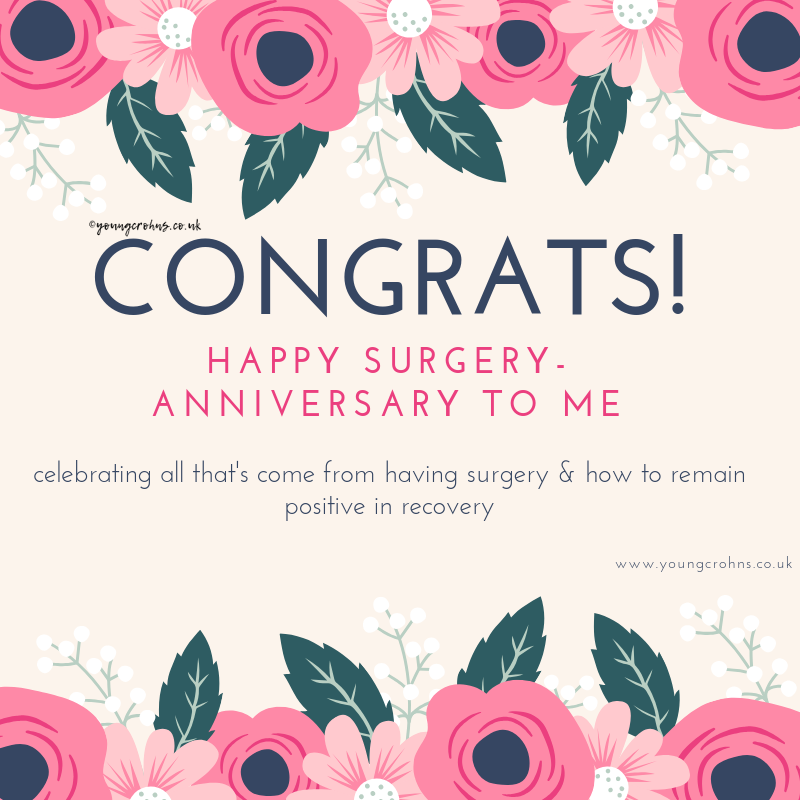 It is forever etched into my brain.

We’d been able to control, for the most part, my disease with medications and ‘diet’ for the five years prior to that. But, somewhat inevitably, it came down to needing a clinical trial or surgery. I opted for surgery but debated the toss for weeks after choosing. I was going to need testing to predict the type of operation I would need and I still went back and forth throughout all that testing. But once we had a plan, I was keen to move forward. The pain, the nausea, the inability to eat, the lack of energy, sleep; how destructive my disease has become and its hold over my life was slowly killing me, mentally. Surgery could give me the best chance to move forward, to move on, to get on with my life. So, I signed my consent.

That Right Hemi-colectomy was a pleasant experience. The process of getting into the operating theatre was calm, friendly and I did not worry about my life and my body. I just wanted some relief.

I did get relief but it did not last.

My recovery was blurred with more admissions, drugs and important conversations with new doctors and more surgeons. My fix did not fix me, not this time.

So, why would I be choosing to celebrate my surgery anniversary?

Because for me, life changed after surgery. I would go through hell after it to get the surgery that would save me and my life. The one that would change me; physically and mentally. My ostomy; god love it, has been a game changer for me. But I struggled to get to there. I understand how thoughtful my IBD team had to be before I would get there. That I would have to try things, suffer abit more, push myself through it, build my patient advocacy cap and fight hard. I have! I do. I still fight even these days; when I am sitting here after a day at work: something incomprehensible this time last year. Working was low on the priority list last summer, but it steadily rose through the list as my recovery from ostomy surgery progressed.

I celebrate because I want to remember my struggle, my path to becoming an ostomate. To becoming who I am now. I doubt that if I had taken the clinic trial route back in February last year, that I would be as I am right now. I would be more clued into medications and hospital policy and routes into trials but I might have suffered a considerable amount more than I did. Not that that is even guaranteed and not that I wouldn’t have found the positive in that; but my path is mine and mine alone. It’s created me.

I still have my eye on research, on new medications, on all the related IBD news and even ostomy news now too, so my interest for bettering my care, becoming more advocacy orientated has not subsided. It is passion that drives me forwards. And that has been a surprising and proud moment for me.

If anything sums up how I feel about this last twelve months it’s this: That First Week or So...

Being Medication Free: It's Effects on My Body