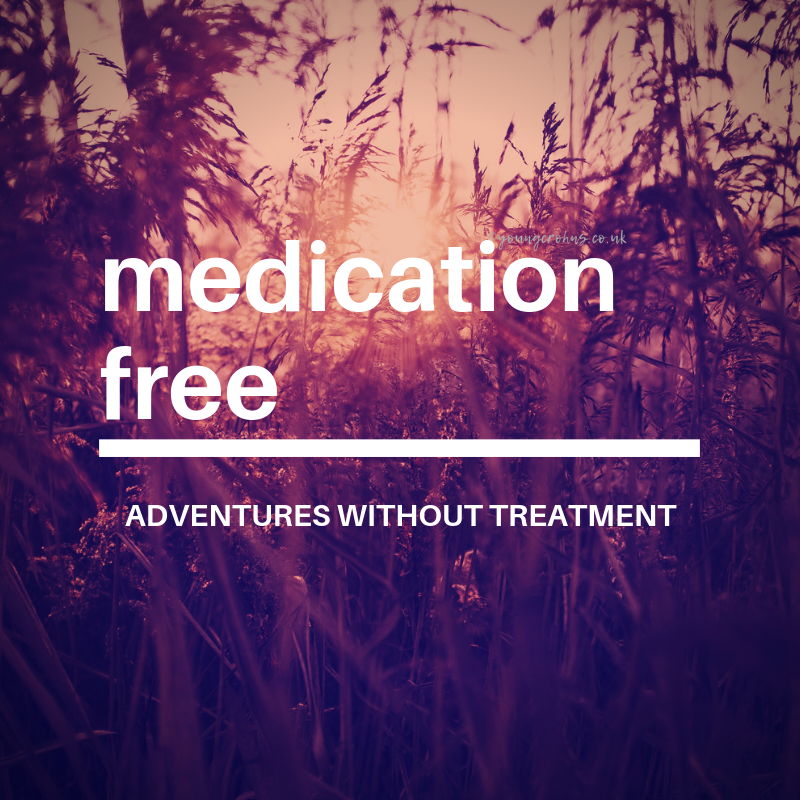 Disclaimer: This information is based on my own personal experience since being able to come off my Crohn’s medications. This is always done with authorisation of my consultant and my medical team, following a prepared plan of action. If you seek advice regarding the medications best suited to your condition or indeed any discussion about changing medications or removing them, please contact your IBD team for medical advice.

Let me begin by stating some facts:

Let it be known that I do think that medications can help IBD. There has been many years of information, research and patients who have taken the medications widely regarded to help elevate symptoms. As far as I have experienced, once one medication would start to cause more problems than it was solving, I would move onto something else. Sometimes this would happen after a couple of years, other times its was a matter of weeks, on one occasion it was three days.

But, everyone is different. And goals for help managing IBD vary. One thing that should be a big goal for any GI worth their salt is the healing of the lining of your bowel. If this can happen, the bowel can return to some what normal function. Others see goals being; improved quality of life, reduction in dependency on the hospital, returning to work, maintain a health weight; it is very varied. What should be considered, is how you want to manage your IBD. Be it with medication, without it, with diet, by exercising, by holistic measures; you have a say in how you treat it.  Many GIs I have met with encourage patients to take an active role in their care, in whatever aspect this might be.

Once I had my disease colon removed last August, I thought I would be receiving no medication. That was of course, plain silly – I was underweight, still malnourished despite TPN whilst in hospital, weak and struggling with another set back. They agreed that my clinic picture determined that I return to Vedolizumab infusions six weeks post op. I started the schedule again – week 0, week 2, week 4, week 8, then every eight weeks. I wasn’t too hopeful that this would work – I mean, it didn’t not 12 months ago, why now? – but  I was sans colon now. Maybe this would be the tipping point.

It so happens that it was and by the time I had received my fifth infusion in January 2017, they deemed it no longer necessary. Now, step into my shoes – you’ve never achieved ‘remission’ before, not for long anyway, why would you trust your consultant this time?

In January, after my scan; they did take me off my Vedolizumab. I would only need painkillers on occasion and my B12 injections. They left me alone, to simply get on with my life. And boy, have I done that in the last couple months! Reminder: new job, new city, new lease on life, chalking up surgery as the biggest win ever.

So what does being with Crohn’s medication actually feel like?

I won’t lie, not having to take pills, go to the hospital for infusions, have to constantly see my consultant for checks, have my blood drawn ever month; it is fantastic.

But not having all those things occur every month, like a fine tuned schedule, it also very disconcerting. I feel as if I am constantly forgetting something because I got so used to being at the hospital. I know the train times off by heart now! I know the quickest routes to different departments! I know who to ask for, how to get the best of out the system! It is all now wasted, useless information, that I have locked in my brain!

Seriously though, I am glad to be without medication. As hard as it is to contemplate life without being shackled to the hospital, it is ultimately very liberating. It has taken two major abdominal surgeries to get here and life these days isn’t always the easiest but it is much better than it was. I still have my stoma to deal with every day, but with every day it gets easier and better. We have a good relationship because we have to have one.

I have noticed some changes with regards to how my body now copes, sans medication:

The end of January was only three months ago. It’s not a considerably long period of time but I know deep down, in my gut – ha – that things are changing, for the better, it feels. Could this mean that my body is finally clear from all the medications? I hope so. Once I’d had my first B12 injection, I found more energy and focus. I don’t look forward to that being lost as we come to another injection being needed – 12 weekly cycle, so I am due at the end of June – but if that is my only thing, I will be happy.

So, going forward, I am looking to see what else I notice that I’ve yet to see from being medication free.

Will I need my flu jab? Will I get sick more or less? Will I be able to fight one off better? What else will continue to improve; skin, hair, nails, teeth, sleep?

It’s all yet to play for.

Disclaimer: This information is based on my own personal experience since being able to come off my Crohn’s medications. This was done with authorisation of my consultant and my medical team. If you seek advice regarding the medications best suited to your condition or indeed any discussion about changing medications or removing them, please contact your IBD team for medical advice.