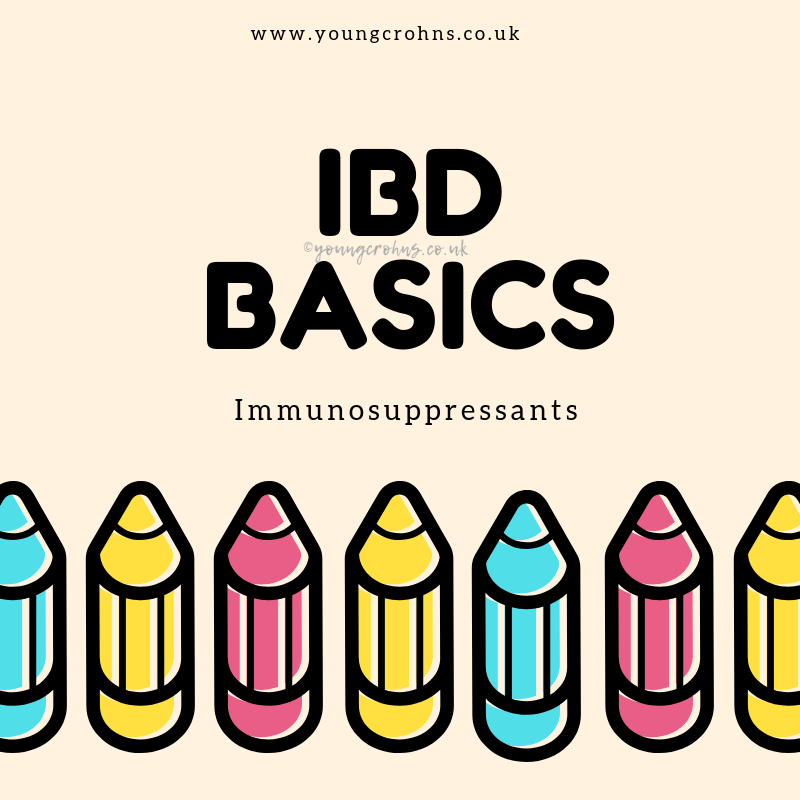 If you are looking for the entire ‘IBD Basics’ series, you can find them all here.

What are Immunosuppressant & Why are they important?

Immunosuppressants are drugs which damped down the immune system. They can also be called Immunomodulators; as they modify the immune’s response to a proposed threat to the body.

IBD is an auto immune disorder, in which the immune system over reacts to inflammation. The cause is still unknown, but treatment plans usually look to changing the body’s response to this inflammation. Immunosuppressants are a good way of helping control these responses; preventing too much damage occurring.

Immunosuppressants can be appropriate in the following treatment situations:

Common drugs under the umbrella of immunosuppressants to treat IBD are:

The dose of these drugs will depend on your body weight and with the severity of your condition. You may be started on a low dose which is then increased gradually. Those with liver problems or the elderly will typically stay on a lower dose for the safety due to other conditions.

Doses are also based on the levels of enzymes in your body that break down the drugs.

Methotrexate is taken as a single once a week dose on the same day each week. It can be taken in two different ways – either by tablets or by injection. Sometimes people start off on the injection form, before moving to oral tablets.

• Tablets: taken by mouth, after food. The tablets should be swallowed whole with a glass of water while sitting upright or standing. Do not crush or chew them. They come as 2.5mg or 10mg tablets – but be aware both tablets look very similar so it is important to double-check your medication after receiving your prescription from your pharmacy.

• Injection: can be either subcutaneous (under the skin) or intra-muscular (into muscle). These can be given at the clinic by the nurse, or alternatively your nurse may train you to inject the methotrexate yourself.

Benefits of Methotrexate can take up between 8-12 weeks. It is also important to take the folic acid also prescribed along side the Methotrexate.  Folic acid is a vitamin that can help your body cope with methotrexate and help reduce some of the possible side effects, such as nausea and vomiting. Usually it is taken once a week, but not on the same day as methotrexate. But a number of different regimes may be used, so it best to confirm this with your specialist if unsure.

Cyclosporin is given as IV in hospital and then oral gel filled capsules afterwards. The dose is given according to your weight usually in the range of 5-8mg per kilogram of body weight per day. The dose may be adjusted according to response and levels of drug in the body. Cyclosporin is also available as a liquid if you have problems swallowing the capsules. This medication needs to be taken twice a day, spaced evenly apart – example: 12 hours apart 0800 and 2000 – as this ensures the drug is evenly distributed throughout your body.

Side effects from these medications can be:

Your doctor should talk through the risks and benefits before you start Azathioprine, Mercaptopurine, Methotrexate or Cyclosporin. Let your doctor or IBD nurse know about any new symptoms you develop, whenever they occur.

NB: If you are worried about taking an immunosuppressant or you have any questions about your particular  treatment, contact your doctor or IBD nurse. They should be able to help you with queries such as why it has been prescribed, what the correct dose and frequency is, what monitoring is in place, and what alternatives may be available for you.

For my Crohn’s disease I’ve taken three of these four immunosuppressants. You can read more about my experience with Azathioprine and Mercaptopurine here.

You can also read more about my experiences with Methotrexate here.

Have you had to take any immunosuppressants for your IBD? Have you found them useful as a treatment option? Have you any experience with the side effects? Have you had success with them?