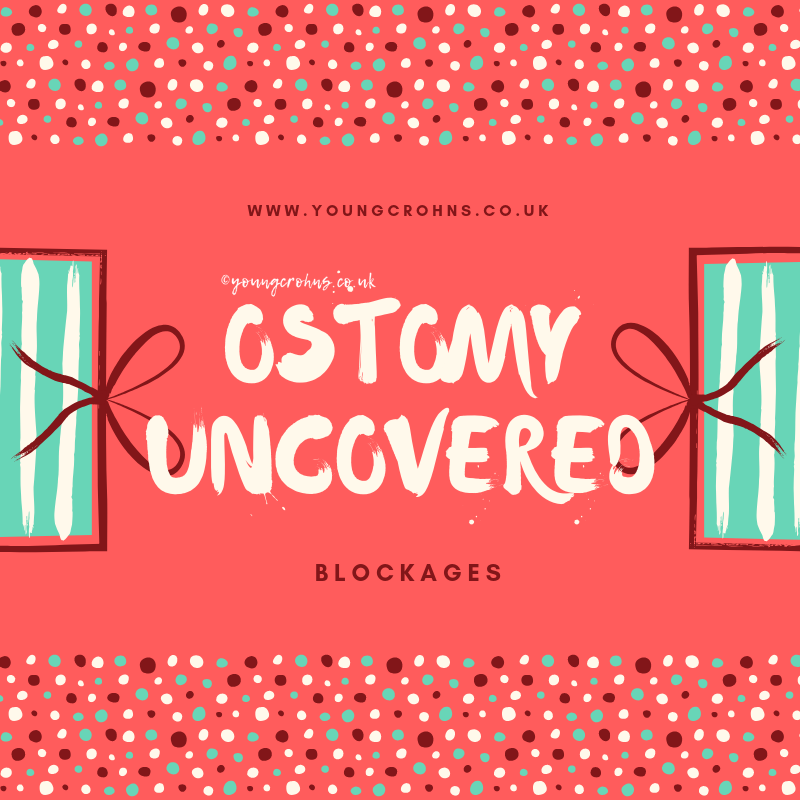 If you are looking for the entire ‘Ostomy Uncovered‘ series, you can find them all here.

What is a ostomy blockage?

An ostomy blockage is when a stoma becomes blocked. This can happen for many reasons, some simple and easy to resolve, others abit more tricky. But, in any circumstances, ostomy blockages should not be taken lightly.

What can cause them?

First of all, it’s important to note there are two types:

Non-mechanical obstructions happen when there is an interruption of peristalsis in the bowel. If this is temporary it is called ileus, caused by abdominal or pelvis surgery, infections such as gastroenteritis or appendicitis, opiate pain medication or electrolyte imbalance. If the lack of peristalsis becomes chronic or long term it is then called pseudo-obstruction linked to muscle and nerve disorders like Parkinson’s and MS, Hirschsprung’s disease and nerve injuries.

Not all of these symptoms will occur, or happen at the same time. There is variation from person to person, and it best to identify which symptom would be most troubling to you.

How are they resolved?

To help resolve the blockage you can:

How are they managed in hospital?

If those steps don’t work and the conditions persist for more than 2 hours or if you start vomiting; seek medication attention from either your SCN or your hospital A&E department.

Once you have sought medical attention, your treatment will probably begin with intravenous therapy to replace the fluid, sodium, and potassium you have lost; and the administration of pain medication. An x-ray or other diagnostic test is conducted to determine the source of the obstruction. Depending on the patient and the suspected culprit for the obstruction, a NG tube may be inserted into the intestine via your nose to (1) decompress the built-up pressure, and/or (2) try to relieve the source of the blockage. Sometimes mechanical (dynamic) bowel obstructions caused by disease or scar tissue require surgery.

It may take a few days for the obstruction to resolve, at which point a normal diet will slowly be reintroduced; usually starting with fluids, then progressing to solids. You will be monitored for any signs of ongoing problems.

Why is being aware important?

Blockages are more of a concern during the initial 6-8 weeks after surgery, when the bowel is swollen from surgical manipulation. While the swelling is temporary, it does narrow the lumen (inner opening of your bowel), particularly as the bowel comes through the many layers of your abdominal wall. A narrow opening may prevent certain foods from passing through your stoma easily. Small amounts of tough to digest foods are unlikely to cause problems, but larger volumes or poorly chewed/cooked fruits and vegetables may give you some difficulty. After those initial couple of months, you should be able to eat most foods without concern.

In the almost two years since having my ostomy, I have had three admissions due to blockages that needed medical intervention to resolve. I have also had several partial blockages in that time too. Neither of these are preferable over the other; as they are painful, annoying and frustrating. However, they do need to be taken seriously. My admits have lasted from 48 hours in the shortest instance and up to 10 days in the longest instance. Each time, I vow to do better for the next time, and I try to not beat myself up too much; these things happen! Knowing the warning signs and being able to manage them at home is always preferable to an admission.

However, Eric from VeganOstomy had some great tips on being able to eat these but avoid a possible food-related blockage that have really stuck with me:

My previous blog posts on this topic can be found below:

SoBadAss: ‘What to do with a Stoma Blockage’