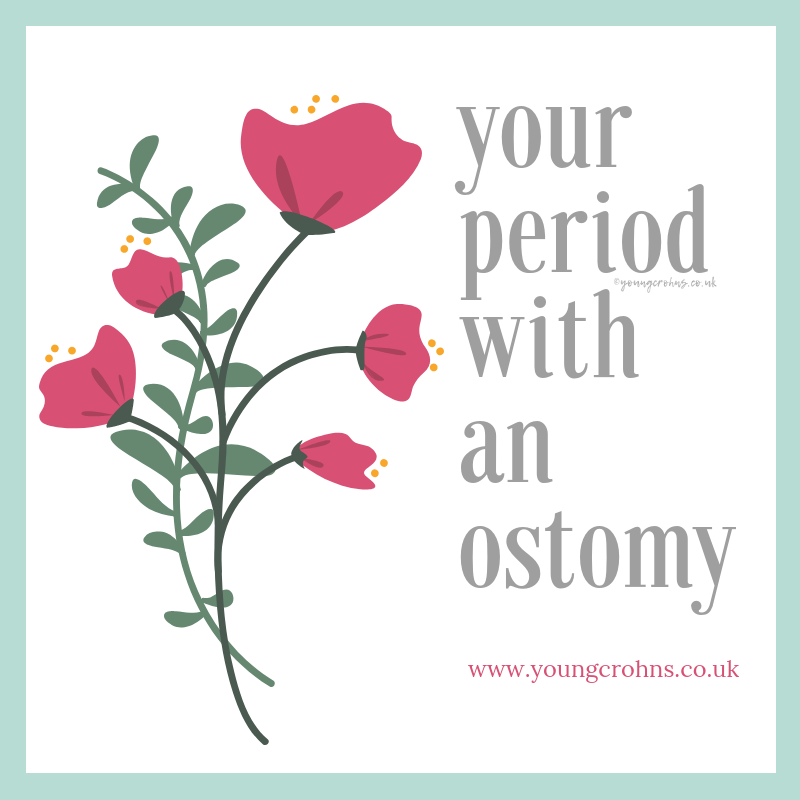 It’s something that happens all of us ladies, but

is it something you consider discussing when you get diagnosed with a chronic illness?

A little medical history on me: I was diagnosed with PCOS – polycystic ovary syndrome – when I was 16. My IBD diagnosis happened seven years later in 2011. My PCOS was controlled mostly by birth control of which I tried many before a oral contraceptive settled my symptoms down. My periods were light and pretty painless. Until the IBD, that is. They took a while to come back – my specialist stopped all medications in order to get my IBD under control – but once they did, they were painful and made my IBD flare up, mildly. I switched to a contraceptive patch in 2012 and continued that until recently when I needed to have the implant fitted.

Do we all have increased IBD symptoms at that time of the month?

When asking fellow IBDers and fellow IBD ostomates, it seems that the resounding answer was yes!

The severity of this is, however, dependent on whether your disease is active or inactive. The proximity of the uterus to the bowel, both small and large, can trigger some of the abdominal discomfort we experience during our cycle. The contractions of the uterus can cause the bowel wall to move and stimulate the inflamed areas of your disease. This can in turn create some IBD related symptoms for 3-7 days during your cycle. They usually aren’t too extreme, but this depends on the location, severity and active nature of your disease. For many of the women I spoke to, periods for them were irregular whilst being treated for their IBD, it is one symptom that is a defining characteristic for IBD over that of men being diagnosed with IBD. It is, also, largely overlooked and written off as something else.

Does having an ostomy make your periods different in any way?

If your ostomy has been able to help control your IBD, then yes. This means that potential your disease activity is low. I’ve found that my regular cycle has returned to normal in the post op period and had continued as my IBD has settled down and gone into remission. Each month, the pain I feel is just period pain but it is a sharp and uncomfortable reminder of the IBD abdominal pain I would suffer from daily, so it takes me by surprise every time. It is acute, so I know that after 3 days I am back to living a life without pain.

How do you deal with your period with an ostomy?

Be in a colostomy, ileostomy or indeed a urostomy; there are some helpful tips to cope with this.

Do you have any tips to help ease your own period? Has IBD affected your cycle? Did you have issues prior to diagnosis?

Life Lately | Getting My Career 'On'

Life Lately | Being 'Too' Comfortable?