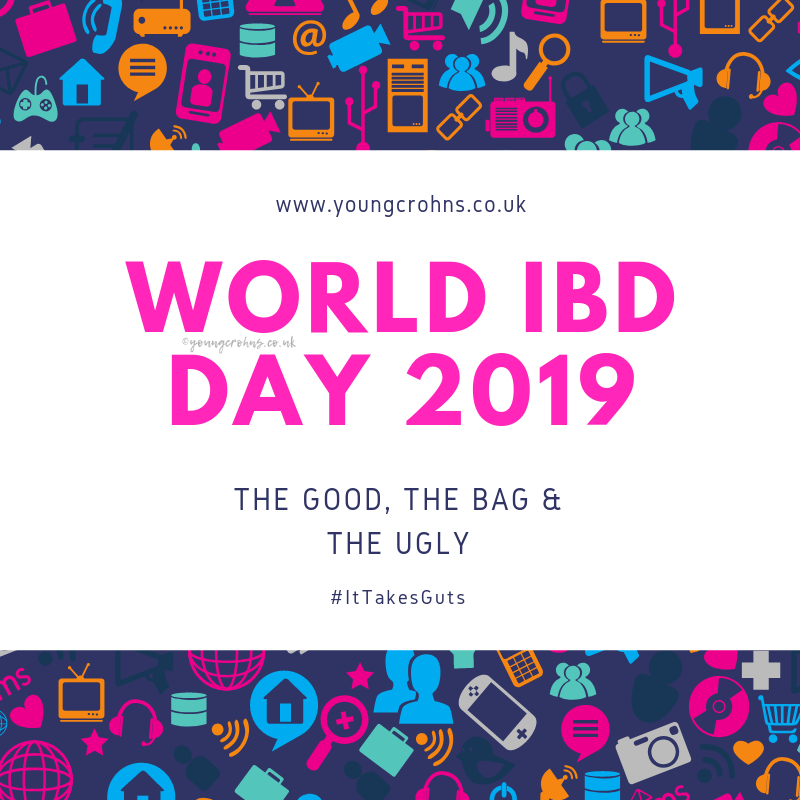 “We know It Takes Guts to talk about Crohn’s and Colitis. This World IBD Day, we are supporting people to start conversations that really matter.

This year, Crohn’s and Colitis UK have launched a new website – It Takes Guts – for World IBD Day.

It takes guts to talk about Crohn’s and Colitis. But no one can see it until we say it.

It’s time to speak up and break down the stigma.

One conversation at a time.”

Here is my (recent) story:

The good, the bag and the ugly.

I was diagnosed with Crohn’s Disease in September 2011 after a year of intermittent symptoms including some weight loss and changes in bowel habits. In August 2011 I got food poisoning and this dramatically increased my symptoms, and when they didn’t go away after a couple of weeks, I got admitted to hospital with a fever and V&D. Three admissions later and after several misdiagnosis, I had my first endoscopy procedure and low and behold there was extensive inflammation of my colon, and biopsies confirmed Crohn’s Disease throughout the layers of my bowel.

The first three or four years of living with IBD was a rollercoaster. I could go from feeling pretty well to being very unwell within days. I also felt the emotional highs and lows of living with an invisible illness, no one could see what my body was doing inside; they could not see the medications I had to take affecting my other organs, the pain I was in, the procedures I had to have to ensure my IBD was monitored and deemed controlled. If I wasn’t loosing weight or being sick, not many people knew I had a bowel disease. For a while, I kept alot of what I experienced locked in my blog. I found writing a great therapy – something I picked up from early CBT after diagnosis – and continue to feel the same way today, almost eight years on.

In 2015, my medication started to fail. I was put on Methotrexate to help the Infliximab work better but my body was creating antibodies to it faster than we could fight back. I was left with three options – wait for another drug to come about (at that time, it was Vedolizumab and it was a couple months away from being available on the NHS for moderate to severe Crohn’s Disease), a clinical trial at a research hospital in Nottingham or surgery.

I chose to wait for the new drug and if that didn’t work, I would have surgery.

I went from being a good weight, my IBD controlled by a successful medication as an outpatient and seeing my team every 3 months; to being seven stone in weight, my IBD flaring after surgery and bowel infections, having six admissions in 5 months, loosing some small bowel and my entire colon and having an end ileostomy created to save my life.

Having a stoma dramatically changed my life.

But it hasn’t always been a good thing.

I’ve fought off bowel obstructions, blockages, infections, dehydration, extra intestinal manifestations of my IBD – without a colon, it’s attacked my organs instead, despite being on medication – as well as a big flare up.

I was never ignorant of my disease before I had surgery but since then, things have changed.

My disease is still largely invisible but now have abit of my bowel sticking out of my abdomen. That is a challenge in itself, some days. Other days, it’s a relief to not have to worry about my butt or needing the toilet urgently.

My stoma has made me more willing to engage in conversations about IBD as well as life living with a stoma. I’ve had to be blunt at times because strangers think that I do not look ‘sick enough‘ to need to use a disabled toilet to change my bag. You never get used to the shock of someone who does not know you having an opinion of your body or illness. Responding can be a challenge at times but it is just one example of how much stigma surrounds IBD and other invisible conditions.

I try hard to live openly and honesty about my life with IBD. It’s incurable, invisible and affects huge chunks of my life. I am in my early thirty’s and I’ve had this illness for almost 1/3 of my life. I will live the rest of my days with my stoma – as it now permanent – and I will always take medications to help control the symptoms of my disease.

That is my reality.

But it goes beyond the physicality of it, it goes down into my mental state, my emotions, my choices and my experiences.

And for anybody who might be seeing any changes in their health:

Please please please get checked out if your normal habits change and stay changed for a couple of weeks. If you notice blood, weight loss, fatigue, vomiting, diarrhoea – anything that looks and feels like a stomach bug but it lingers – please get it checked out.

Do not ignore a problem, because it doesn’t necessarily go away. Detection of this disease – or indeed any condition –  in it’s early stage makes it more manageable, now and in the long run. But be aware that despite it being incurable – at the moment – it is not a death sentence. I know wonderful and amazing people doing great things whilst living with IBD. They are testimony to how to survive with a chronic illness, throughout its ups and downs.