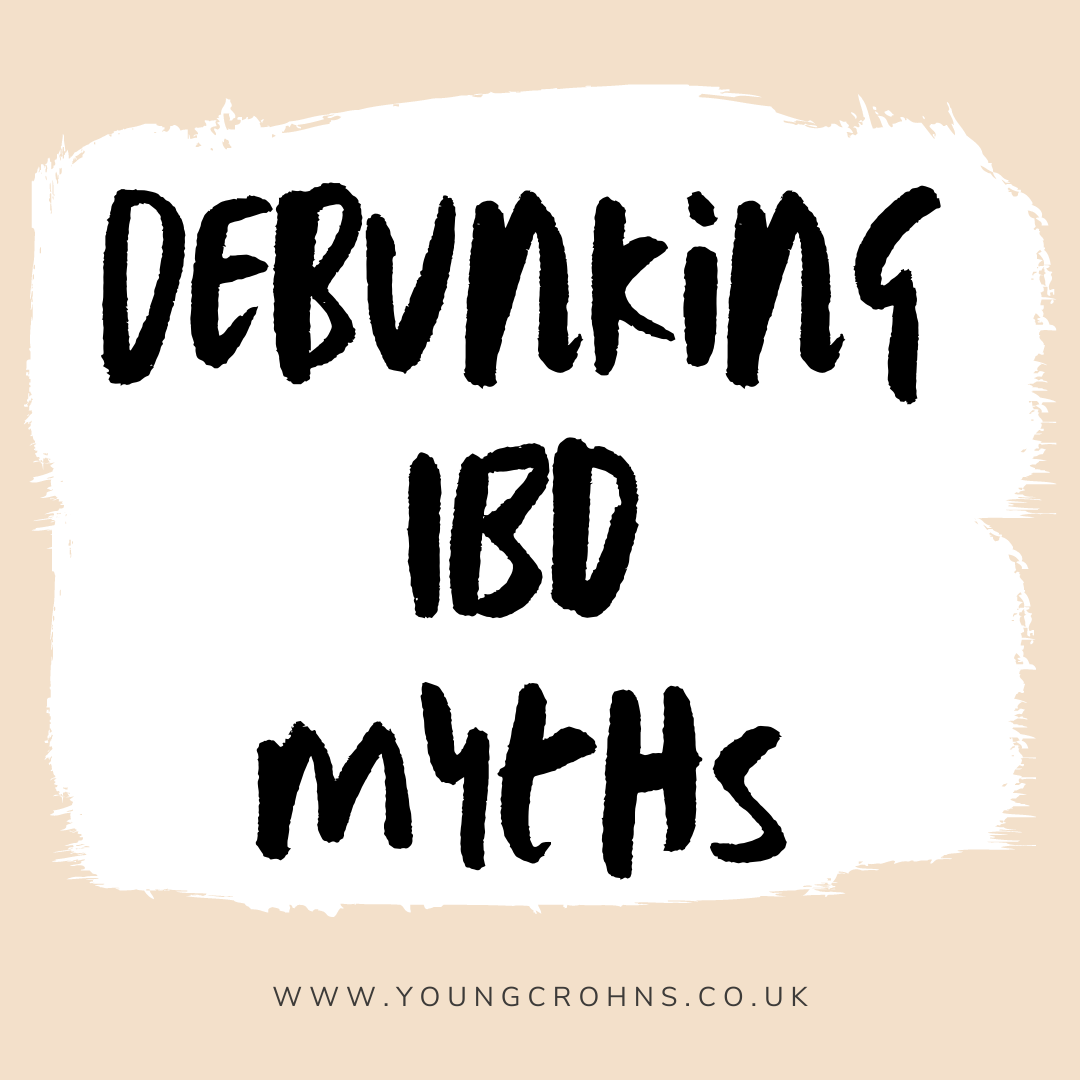 Back in February, I wrote about ‘Assumptions About IBD & Stomas‘ where I discussed how there are many assumptions and myths surrounding IBD and having a stoma.

Assumptions are usually founded on false information, historically based in the past. While they might have some facts to them, they are usually warped beyond the reality they belong to right now.

I’ve had all of these quotes said to me throughout the last ten years of having IBD. For the most part, I’ve been able to find a way to respond, but in the very early days of having IBD – when I was only months into my diagnosis, when I struggled with my weight gain, the side effects of drugs and frequent hospital appointments – they were very hurtful. Please be kind.

IBS is very commonplace as it affects up to one-third of the population and is treated with dietary and lifestyle changes as well as medications.

IBD is less common, it affects 300,000 in the UK – roughly 1 in 210 – and is the chronic inflammation of the digestive trace, which manifestations go beyond the gut. It is an autoimmune condition, in which treatments are usually long term and include surgeries, strong immunosuppressive drugs as well as chemotherapy drugs.

“You do know that eating kale / going vegan / using aloe vera can cure it right?”

There is no cure for IBD.

While changes to lifestyle and diet can reduce symptoms experienced by individuals, there is no one cure for a patient who has IBD.

“You don’t look ill at all, in fact, you look fine”

IBD is an invisible illness, which means it is not always visible to others because it does not have many visual manifestations. Symptoms are usually concentrated on the digestive system, which is not visible.

“Your bad diet must have caused it to happen, its your own fault!”

The cause of IBD is still unknown. There are elements of genetics, environmental and immune system malfunction.

Usually, a trigger will set off a flare-up – which if new, could go undiagnosed for months or years, in some cases – and this is an immune response.

There is nothing that anyone does to ‘get’ or ‘catch’ IBD, it just happens, unfortunately. And it certainly isn’t your fault.

While IBD can be very draining – frequent diarrhoea, interrupted sleep, fatigue, pain. All of these contribute to feeling very tired – it is not a pleasure to be bedridden.

Rest is important, even more so when you are unwell.

Again, we don’t enjoy having to take time off work or cancelling events because of our health. It can sometimes happen quite frequently that we lose touch with friends and have trouble maintaining friendships as well as relationships. And taking time off can often lead us to feel inadequate, despite the legitimacy of our need to be at home.

“I wish I lost weight as easily as you do”

Weight loss is a common symptom of IBD but is not a badge or medal of honour. Losing weight is a sign that the body is not getting enough nutrients from the food consumed – if it is consumed at all – and is burning fat instead. It means the deficit your body is in, is due to your disease being more active or not adequately managed.

“You haven’t done anything how can you be tired?”

Fatigue can play a huge part in how much we are able to do, at any given time. So while most people might only see us for a couple of hours in one situation, we might have other things that leave us feeling more tired than others who are healthy.

Also, frequent toilet visits, loss of blood, lack of sleep and reduced appetite can impact tiredness too – as your body tries to conserve energy for the important tasks it must do in order to function.

While those things might be great to do and easy for others to do, we just might not be able to. Physically, mentally and emotionally; we might not be in the right place or frame of mind to take on extra advice or tasks. Listening to your body and trusting your instincts is an important part of learning about IBD.

“You were okay when I saw you last week”

Again, our energy levels can not be predicted and nor can they always be consistent. As well as energy levels, pain levels vary too, so some weeks are better than others.

“You worry too much, stress is making you sick”

While doctors did originally believe that stress was a large contributing factor to the cause of IBD, it has now been downgraded.

Worrying about health and illness is a common thing and not something that can easily be switched off. Some people worry more than others, while for others it does not factor into life for them.

It is always nice to hear that we are not alone with our pain or symptoms. But having IBD is nothing like having a bad tummy, one time. It is a chronic and long term condition, so it is likely that our ‘bad tummy’ lasts not only longer but more frequently and goes deeper.

“Your’e still having symptoms?! Aren’t you better yet?”

IBD is lifelong, which means symptoms will come and go. When symptoms persist, we feel that, more than anyone else. Better for one person might be different from another. As well as symptoms coming and going, being ‘better’ also comes and goes, which is why monitoring and check-ups are important.

"Is mental health overlooked in IBD?"