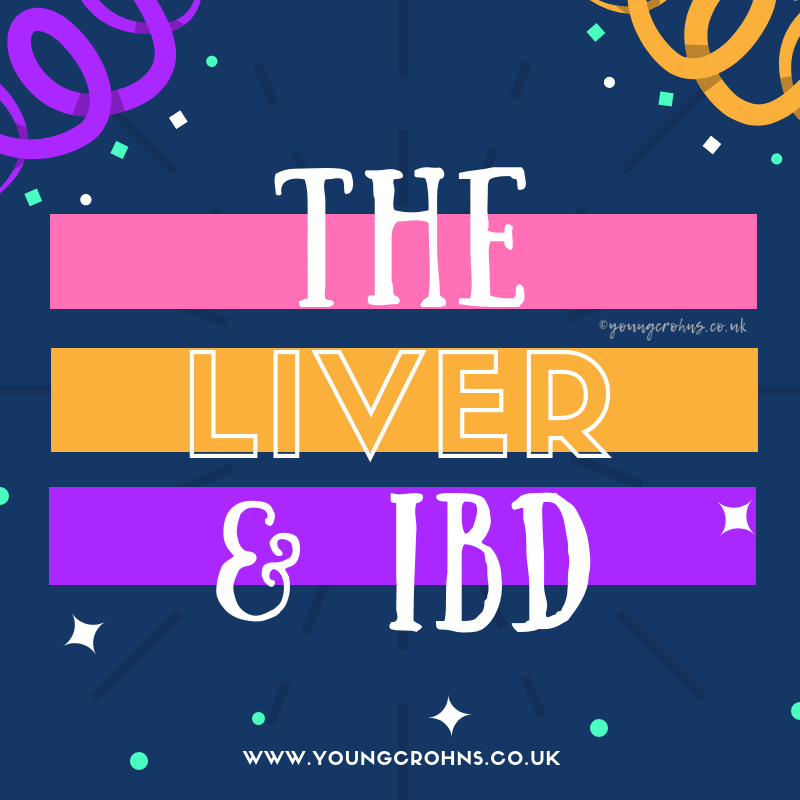 What is the Liver and how does it function?

The liver acts as a “processing plant” in the body, taking what we ingest and breaking it down. The result is that some of what is broken down goes into the system through the blood stream and the rest is expelled as waste. What the liver breaks down and is used by the body – cholesterol, acids, and bile salts – are stored in the gallbladder until needed to break down fat. As well as the liver, we also have bile ducts – which transport bile or waste from the liver to the upper small intestine – and the pancreas – which is connected to the same common bile duct as the liver and gallbladder, also transports enzymes to the intestines to break down food.

These organs work well together in a healthy body which is not infected, diseased or under stress. When these things happen, the delicate balance is disrupted and it can have serious consequences.

Why is this relevant to IBD?

When the body has an acute flare up of IBD, it can also result in active inflammation in the Liver too. This usually reduces as the appropriate treatment for IBD progresses. But in some cases, the inflammation continues in the liver despite treatment of the primary condition. This is about 5% of cases.

Common symptoms of issues with your liver can be low energy and fatigue; which unfortunately can be sometimes dealt with as anaemia or vitamin D deficiency which in themselves take a significant period of time to resolve or improve.

Also, the medications that treat IBD can cause weight gain or liver damage, increasing your risk of fatty liver disease. Certain medications also can increase your risk of reactivating hepatitis viruses that damage the liver. Simply having inflammatory bowel disease is a risk factor for certain liver diseases, such as primary sclerosing cholangitis.

What can go wrong with your Liver when you have IBD?

Non-alcoholic fatty liver disease is the most common liver disease in Western countries. In this condition, extra fat builds up in liver cells not due to alcohol or other causes. It affects about 27% to 38% of the general population.  Among people with inflammatory bowel disease, about 23% also have fatty liver disease. Another term for this disease is “hepatic steatosis.”

There are several explanations for the increase in overweight among people with IBD. Commonly used medications such as corticosteroids and biologic medications may lead to weight gain. Weight gain is also a side effect of medications used to treat symptoms and complications of IBD. It may also be difficult to eat a balanced, nutritious diet. Many people with IBD avoid foods that make their symptoms worse or increase their risk of a blockage. Each person is different, but for many people this means eliminating hard-to-digest foods such as stringy vegetables.

Medications used to treat IBD may contribute to fatty liver disease in other ways. Corticosteroids also cause fat build-up in the liver. Long-term use of methotrexate may cause liver damage, including scarring (fibrosis), fat accumulation, and inflammation.

Diagnosis: Symptoms include pain in the upper right of the belly, yellowing of the skin and eyes (jaundice), and itching. However, many people with fatty liver disease do not have any symptoms.

Your liver and spleen will be looked at with an ultrasound, CT scan or MRI .These tests will help your consultant to see fat build-up and scarring. They may suggest getting a liver biopsy. In this procedure, a sample of tissue is removed through small incisions. This sample provides information about the amount of fat in your liver, as well as inflammation and scarring. There are also non-invasive alternative tests that provide similar information.

Treatment: There is no standard medical treatment for fatty liver disease. Instead, the first course of treatment is to eat a healthy diet, increase exercise, and attempt to lose weight. Weight loss of as little as 5% to 10% improves liver function. Exercise, even without weight loss, also benefits the liver.

People with IBD have unique challenges when it comes to weight loss. Many people with IBD find it difficult to eat a healthy, varied diet because of their symptoms. Exercise may seem daunting; especially when you are tired, in pain, and concerned about needing to use the bathroom frequently. For general health benefits, 30 minutes on most days is enough, even if you do it 10 minutes at a time. Realistically, though, there are times when you do not have the strength even to shower, let alone go for a walk. It is common for people with IBD to feel frustrated about being unable to care for themselves.

Cholelithiasis, or gallstones formation, is the second most frequent hepatobiliary manifestation of IBD and is more common in Crohn’s disease than Ulcerative Colitis. Gallstone formation occurs when there is a diminished absorption and re-secretion of bile acids. Bile salts keep cholesterol in solution and if they are decreased in amount cholesterol precipitates forming gallstones. These stones collect in the gallbladder and cause inflammation or distension, which can result in severe pain in the upper right hand side of the abdomen. Nausea and vomiting, sweating and pallor may also accompany an attack. The severity and duration varies depending on numerous factors. Abdominal pain and bloating that is relieved by defecation suggests that the pain is originating from the bowel and does not indicate gallstones. An abdominal ultrasound will determine the presence of gallstone formation. For those who experience symptoms of gallstones there are medical and surgical interventions available. For others who have gallstones but are not symptomatic, an increase in dietary fibre and a reduction in dietary fat is recommended.

There are other factors specific to patients who have IBD that may increase their risk of developing gallstones. The first factor is ileal resection or bypass surgery that disrupts the pathway by which bile salts are circulated and thus reduces the concentration of bile salts, hence gallstones form. Gallstone formation occurs in 13-34% of patients who have had this surgery. However, colitis without small bowel involvement does not appear to increase one’s risk. Secondly, parenteral nutrition leads to a dilated and sluggish gallbladder leading to stones because there is no oral food to stimulate the gallbladder to contract.

Primary sclerosing cholangitis is a disease that damages bile ducts inside and outside the liver. Bile is a fluid that helps you to digest fat. It is made in the liver and leaves the liver through bile ducts. Bile is stored in the gallbladder or secreted into the small intestine. PSC causes inflammation and scar formation in the bile ducts. Overtime, scarring causes the ducts to become narrow. The bile begins to build up in the liver and causes liver damage.

Fortunately, the incidence of PSC is rare among people with IBD: Only about 3% of ulcerative colitis patients (and those are individuals with extensive disease) and 1% of Crohn’s disease patients develop this condition.

Diagnosis: Symptoms include ffatigue and itching. If PSC is advanced, you might also have yellowing of the skin and eyes (jaundice), bleeding within the digestive tract, swelling in the abdomen, or confusion. Occasionally, PSC causes pain in the upper right part of the belly. However, in many patients, PSC does not cause any symptoms.

You will have blood tests to check how well your liver is working. If the results indicate that you may have PSC, the next step is to look at liver and bile ducts to see if there is a blockage. Ultrasound or CT scan may be used to check for a blockage in the bile ducts.

Other tests used to check for PSC are:

Treatment: No treatments have been found that cure or slow PSC. Instead, medications are given to treat symptoms and complications. Medications can relieve itching. Antibiotics are given to treat infection. People with PSC may have trouble absorbing fat-soluble vitamins, such as vitamins A, D, E, and K. Therefore, vitamin supplements may be given to prevent malnutrition.

It may be possible to open narrow areas of the larger bile ducts with “endoscopic dilation.” An endoscope is guided through the esophagus, stomach and small intestine to the blocked bile ducts. A balloon inserted through the scope is inflated, opening up the area that has gotten narrow.

If PSC leads to liver failure, liver transplantation may be needed.

The following may help you reduce the risk of extra-intestinal complications:

And although liver conditions associated with IBD are not common and usually not serious, patients with IBD should be monitored carefully and investigated for liver disease if indicated. Awareness of these extra-intestinal manifestations is important since they may be the first reason the patient seeks medical care and timely diagnosis of the underlying bowel condition may depend on their recognition.

Surviving the Summer with an Ostomy: A Guide