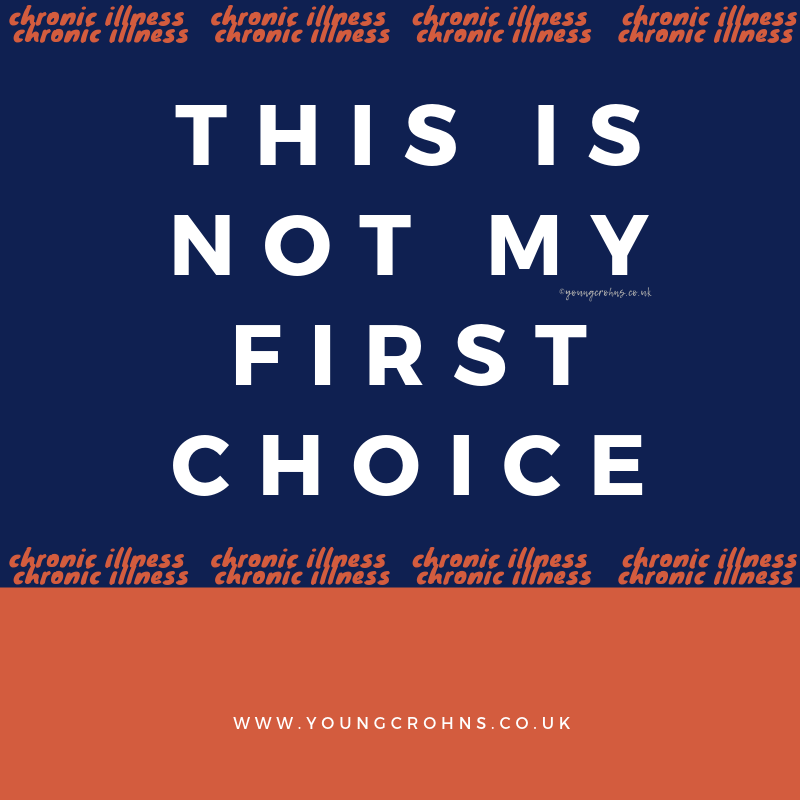 This morning I ordered my stoma supplies with my delivery company and my prescription with my GP.  By next week I’ll be organising and putting away another months worth of supplies to get me through August.

August. My stoma was created three years ago this August. The day before my partners birthday – we celebrated my ‘new’ chapter and his life.

I was always very comfortable with my stoma. Never really hated it as a concept, just what it would do to my skin when my new liquid poop burnt my skin. There are ways to cope with that, but what is there for accepting this new twist of fate?

I spent five long but also incredibly short years living with my colon riddled with disease; active inflammation. We achieved ‘remission‘ – meaning that for brief periods of time, the lining and deeper layers of my colon and small bowel were healthy and not ulcerated – a couple of short lived times in those years, with the help of medications. But in 2016, I had an uncontrollable flare up and my colon just fell apart over the course of 2 and a half months. My symptoms were the worst I’d ever experienced and while I tried to live bravely through it, I was loosing hope.

I remember the day they scoped my colon and five minutes into the procedure, the consultant removed the scope and placed an NG tube under the sedation of the colonoscopy, as agreed prior. Through the haze of being sedated, I knew something was wrong.

They gathered in my room, a hour after I came back to the ward – my IBD nurse, the consultant, the ward sister, my surgeon and his registrar. We had two options; try a medication or have an elective sub total colectomy. They described my colon as being so disintegrated by disease it was like hamburger meat. I knew I wasn’t well – I hadn’t felt like this was my ‘normal’ IBD symptoms for a couple of months but put faith in my team to ‘figure it out and fix me’. That was an enormous task.

I chose surgery, without hesitation.

Then the bleeding started.

I’d never experienced blood loss with my Crohn’s Disease; it’s typically an Ulcerative Colitis symptom. My Crohn’s had first been located in my sigmoid but was healed by biologics. My small bowel was my new hurdle, until this episode. The amount of blood I saw coming out with every bowel movement in the 10 days leading up to surgery was shocking. I was advised it was normal, and that it meant I had made a good choice with choosing surgery. Surgery came with the added task of going on TPN to ensure I would survive.

Surgery was swift and life reset once I woke up.

But would I prefer my colon?

Would I prefer to not have a bag attached to my belly to catch my poop?

But, and this is a big but, I love my stoma.

I’d never seen one before I saw my own. I knew IBD friends who had them. I knew of a community online with them, who gathered to help new ostomates take to this challenging and strange new way of life. If I was honest, I was scared of having to need one. But to be scared of choosing to have one? That would be weird. I tried a fake bag on prior to surgery and it wasn’t so bad. It was practically invisible to everyone else around me. It felt comfortable and even with some weight in it – to represent the pull of output filling the bag – I felt good about it.

I remind myself every day that I have this stoma, it does not have me.

While I would prefer a colon and full functioning digestive system, that just isn’t how my Crohn’s disease has or will ever behave. It was always fierce and powerful. It has not gotten easier with a stoma, it is just different and I’ve gotten used to these new hurdles.

Without a colon, I bounced back from colectomy surgery within a month or so. I was still underweight and struggling with sore peristomal skin but I was happy. Who would have known loosing an organ would be so liberating, so freeing?

The quality of my life is much different to that of when I did have my colon. My disease is still there, lingering in my small bowel and is currently controlled by yet another biologic medication. That has been the case for almost two years. I now have my stoma for life; I had my rectal stump removed in March this year. It was tough, but there is no regrets for having that done either. I’ve been able to come off strong pain medications, I’ve become more and more comfortable with stoma life – slightly odd that making it permanent made me realise the length of the acceptance journey for this ‘new normal’ life.

Would I love to not have to empty my bag and just go to the bathroom ‘normally’ again?

I have an ileostomy so frequent emptying has become just part of life. Knowing when to empty has become another part of life too. The anxiety of knowing where the toilets are is still there but it is not because of urgency, it’s just to feel comfortable and to reset that empty bag feeling.

I will take that over urgency, any day of the week.

Pain: When does Acute turn into Chronic?