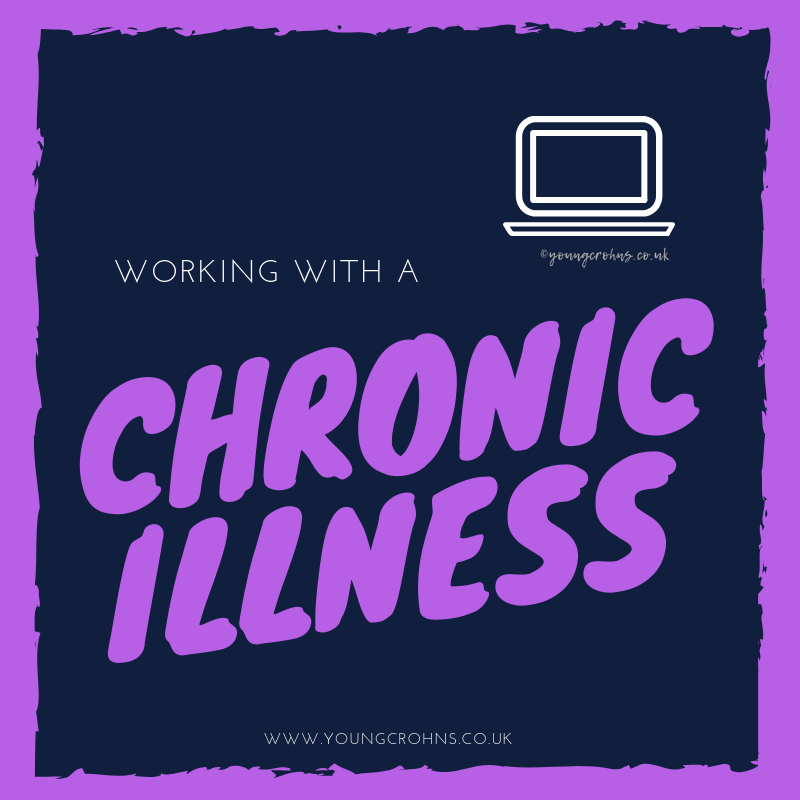 There, its out there, I’ve said it!

Pre-surgery IBD days, and here I talk about the period of time from my diagnosis until I was left unemployed four and a half years after that; I had bouts of ‘sickness’ and I never really had a prolonged period of time off work to get ‘better’. And upon my diagnosis, I was told to get ‘fixed’ and ‘come back when I could’. Clearly, they hadn’t really ever had anyone with a chronic illness before, and I was new to it too; so I went with the flow. I spent most of my ‘time off’ at that point in and out of hospital multiple times; desperately trying to get back on an even play field. These days, an even playing field is a harder task but I am a more experienced patient now. I’ve had my fair share of issues and problems that I’ve coped with even whilst continuing to work. Something that, in those periods in time, was just second nature and ‘part and parcel’ of having and living with a chronic illness.

‘Understanding’ was one of those emotions that got chucked in to conversations like it meant something to say it. It takes a similar experience for someone to truly express understanding, and this was lacking in every job I’d ever had. Until now.

Don’t get me wrong, some of the people I have worked with in the past have been fabulous at appreciating my situation but I realise that having something chronically wrong with you can sometimes hold you back. Not through any fault of my own, I certainly didn’t give myself IBD now did I, but I was always treated – subtly – different. It was the small comments, the unsure looks or glances, the dropping of shoulders upon ‘more bad news’ and being left out, somewhat ignored or dismissed by others; that was hard to take. It made me feel even worse about being ‘the sick person at work’ and I would work harder just to prove myself. But eventually that would wear me down so much so, that my IBD would flare up and I would be back to square one again; off sick from work or even worse; let go from my job.

I committed myself there and then – in 2015 – to the fact that I would never really find a job I was passionate about and I would have to settle for something that would pay the bills and allow me all the other things that gave my life joy. But I was steadily failing medications; left right and centre, so much so that I knew I needed to have surgery if I was to get a hold on my disease. So when I was let go from my job in 2016 I booked my pending scope and saw the colorectal surgeon again – take it out I told him, I now have time. Surgery would happen 9 weeks later but it would not fix me right away, and by the end of that summer I would become an ostomate.

Imagine my surprise when my ostomy changed my life! Not just in the ‘I poop a different way and my IBD had finally had a chance to settle down after all these years’ way but it’s redefined my goals and aspirations. And I never knew one of them would be to finally have the opportunity to work in a field where I enjoy and love my job. I never, ever saw it coming. I never considered it. Honestly.

And even though my IBD is still not quite as smooth sailing as we had hoped it would be one year post-surgery, I have been able to return to work last week and find myself exhausted but happy. It’s a nice reminder of how I felt about working, before all the shit hit the fan at the end of July.

I work for an medical appliance company. And yes, it is weird being an ostomate and working within that medical realm. But for the amount of weirdness I feel and experience on a daily basis, I get so much more than from it.

Sitting here, writing about a positive experience of working with not only a chronic illness but an ostomy too, fills my heart with so much gratitude. I’m grateful I am now able to work instead of being unemployed and needing benefits to keep me floating along. I am grateful to the life changing surgery I had to save my life. I am most grateful to myself for learning to cope with the new ebbs and flows of my life.

"What is a Stoma?" Part III: Living & Coping with a Stoma

"What is a Stoma?" Part IV: Ostomy Appliances