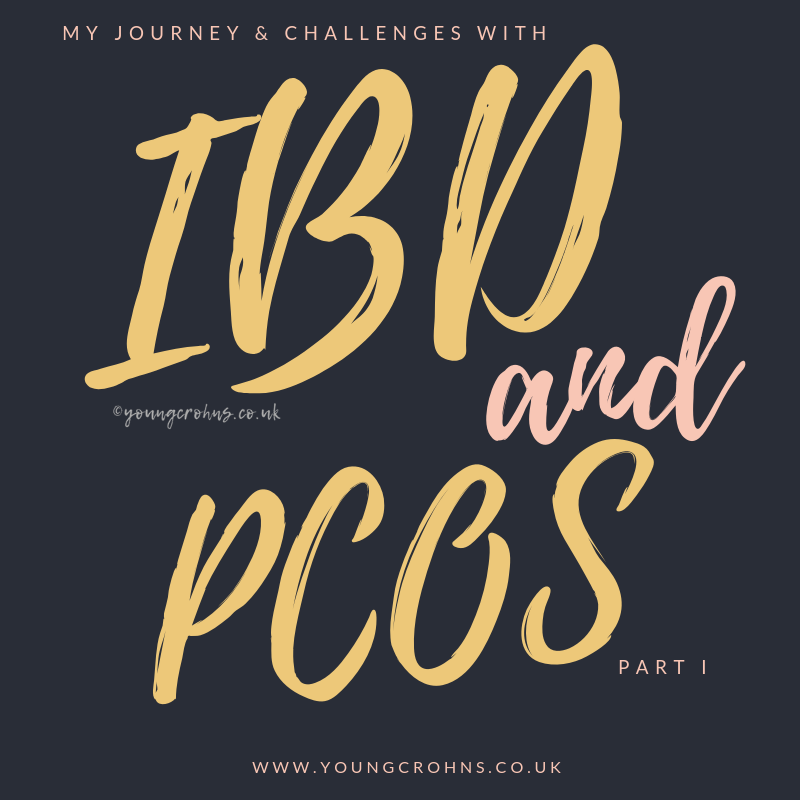 Disclaimer: This information is based on my own research into this particular aspect of GYN as well as some personal experience and should not be used as medical advice or a diagnostic tool. The suggestions given within are taken from sources laid out in the references header.  If you seek advice regarding the things you experience within your own disease, please contact your consultant for medical advice.

PCOS –  Polycystic Ovarian Syndrome  – is something that has been with me since I was 17. I was fortunate enough to be diagnosed under private healthcare and it was always explained to me that it was more about self management that anything else. So since 18, I have been on various contraceptive pills – that help aid the control of the condition – trying to find the right one that worked best for me.

But when I was diagnosed with Crohn’s disease at 23 and whilst on a good contraceptive that worked – the Evra patch – it seemed that PCOS was a secondary issue to everything else. Whilst we battled to get my IBD under control for those first six to twelve months, I was taken off my patches and let to see how my body was going to react to all these new gastro drugs. I can’t quite remember how I felt during that time, but I know I put on a huge amount of weight, of which some doctors was down to my PCOS being left untreated; even if it was just with a contraceptive method. When I was at my heaviest, doctors put a lot of that down to me and my eating habits, not looking at my primary condition and what those IBD meds could and did do to my weight. Those conversations have always stuck with me; I was made to feel like my PCOS being untreated and uncontrolled was my fault when in reality, I and my own IBD team were concerned about getting my bowel condition under control and that took years of hard work.

But as moved towards my IBD medications failing in 2014-15, I started back on the contraceptive patch and things seemed to settle somewhat. I was in a serious relationship: I needed a method of contraception, first of all; but I also wanted to manage the PCOS better. I lost weight – probably down to the IBD meds taking a bad toll on my body as they continued to fail and we gathered pace towards surgery – and I finally felt my PCOS was under control, despite my IBD being very problematic. And this would be a reoccurring theme.

After surgery and they had removed the cyst on my ovary, I knew that the PCOS would have to be treated separate to my IBD but must be considered with every medical decision. I couldn’t risk any more cysts that could grow that big – the size of a tennis ball – and affect my digestive system – as its in very close proximity to my stoma now – I had to get a referral. I continued with my patch but it didn’t help me with the other side effects – the excess facial hair and the acne. I had to take those things into my own hands – with threading or waxing of my face on a monthly basis, and acne solutions from the supermarket. It wasn’t until my GP flagged risk factors for continued use of the patch and would no longer prescribe them, that I had to try and find another method of contraception in mid 2017. I tried the implant but had no end of issues with it; bleeding at random times, the mood swings, the gastro upsets and deemed it not worthwhile; I had it removed just after three months. I was also in a BIG flare up of my IBD and was being reassessed for my biological medication – after having taken a six month break from my Vedolizumab whilst in clinical remission – something which would and did take priority. It was a tough time; I wanted to be better but had so many things to consider. Two things, yes, and at that time it might not be a lot but it was taking a toll on me.

My IBD team got me settled on my new medication in late 2017; I got in to see a new GYN for some testing and started a new contraceptive pill – you can read more about all of that here. And whilst I continue to have my waxing done and I am trying my best to maintain a health weight – for not only my PCOS but for my IBD and most importantly, my stoma! – the PCOS plays on my mind. When my LFT’s started acting weird, I needed more testing to find the cause; and it so happened to be my contraceptive pill. So we’ve recently changed this now too. But its a balancing act.

The answers to these questions is that it doesn’t matter.

PCOS and IBD is common. When I started speaking about my battle with my contraception and the side effects of my PCOS, lots of women with IBD spoke to me. And it was nice to know that I am not alone with this. But it still feels very isolating. The fact that my face grows hair hurts my confidence. Like IBD, PCOS is hidden and invisible but the facial hair then makes it VERY public, when all I want to do is forget about it, sometimes. And it seems that once my IBD is controlled, the PCOS goes abit mental and vice versa. Like I said, a balancing act.

And that balancing act, the constant need to be keep that see-saw steady, is what feeds my anxiety and mental health.

My advice here is to be honest. IBD does not just affect the gut, we know it affects more and more parts than first thought; that many things are connected not by a causing each other but more of a snow balling affect. And whilst you might need to be seen by more than one doctor / consultant / specialist, this is nothing to be ashamed by. Taking ownership of your condition is key. And I know that this is hard to do at time – what with fatigue, pain and just stress getting in the way – but that feeling of at least feeling like you have some control and you have the say in how your treatment is planned and managed; it is the best.

And as for me, I’m going to keep talking and sharing and telling my experiences.

Next time: What treatments I’ve received – away from my IBD – and how I’ve coped with them, and my advice for getting good care.

My Love for You, Dear Stoma...