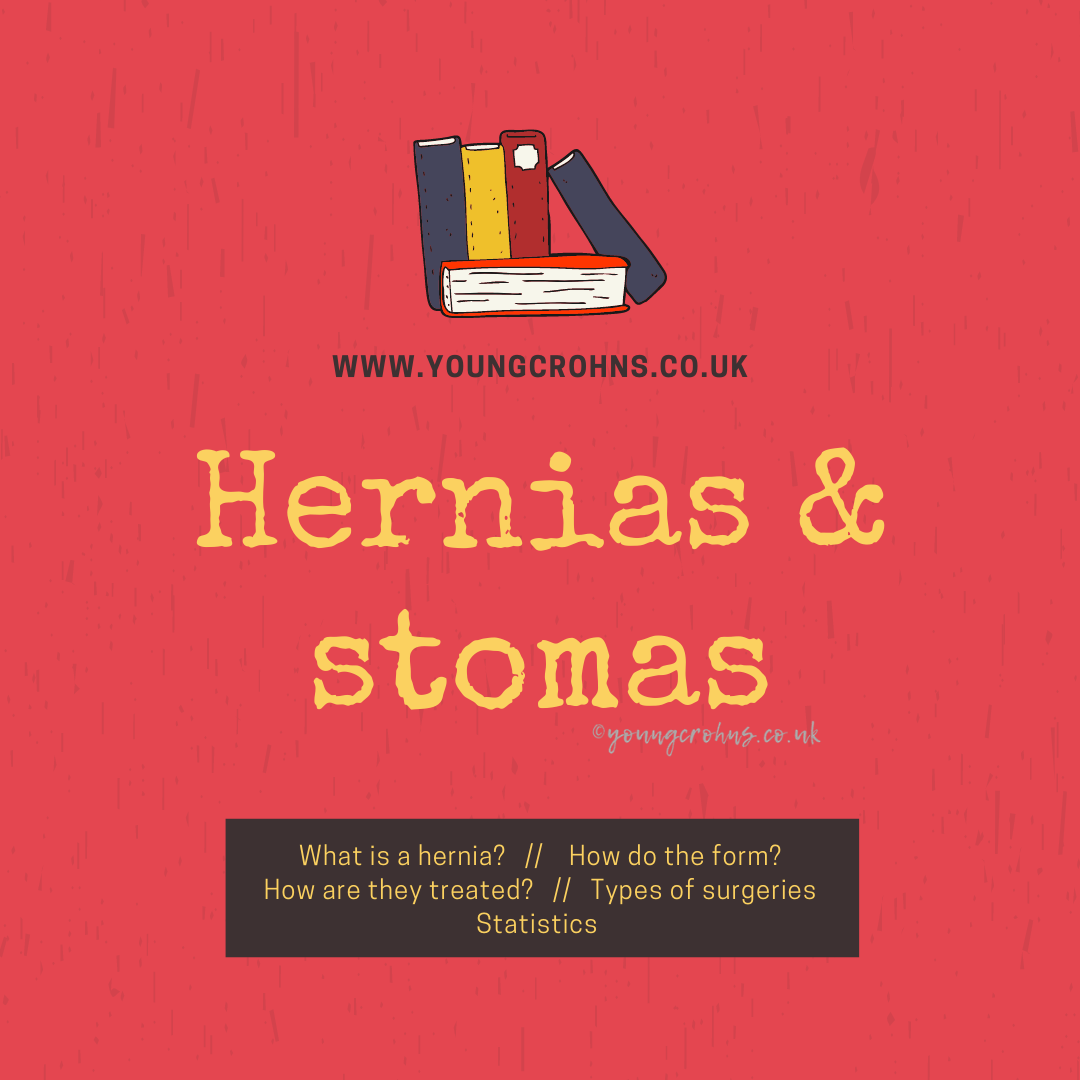 I remember sitting in my hospital bed, after my first solo stoma bag change back in 2016 and my nurse said “you must always try and avoid a hernia. You are more susceptible to them now”. I was four or five days post op and I just nodded along. It was never a big worry to me – I wasn’t very sporty or active – didn’t they happen to just those sort of people?

I would have my eyes opened a year later, when I got a very bad cold and all I did for weeks was cough. Coughing contracts your diaphragm and your abdominal muscles causing sharp and sudden movements. Those movements – along with heavy lifting, weight gain in the commonly termed “front pouch” of the belly, lengthy spells of sneezing, and certain infections – can cause hernias. Especially parastomal hernias.

What is a parastomal hernia?

It is a particular type of hernia that forms behind and around the abdominal opening for a stoma. A hernia, in general, is defined as being “a condition in which part of an organ is displaced and protrudes through the wall of the cavity containing it (often involving the intestine at a weak point in the abdominal wall).“

An added risk of a parastomal hernia is when surgery is done through a large incision – also called an open surgery. I have now had four of those.

Let me be clear, my parastomal hernia was discovered and diagnosed this year, in the mist of Lockdown One. I estimate I’d probably had it – as a smaller, less annoying and less inconvenient hernia – for about 9 month prior to that. So as of my surgery date, probably for a total of about a year.

There isn’t a huge pin point of “this must have happened at this exact time” but more of, when I think about symptoms and how my stoma had been functioning, it could guess it was about last summer things got more ‘difficult’.

Diagnosis only came after a month or so of intense and frequent obstructions, which led me to contacting my IBD team. I got my calprotectin done and some standard IBD bloods done in late April into early May and things were very odd. High WBC and hugely raised calpro. A couple elevated other aspects lead them to put me on steroids – in the pandemic, after being diagnosed with T2D as well, because why not? Why wouldn’t my body have a field day during a pandemic? – and booked me a CT scan. Within a couple days of the results of that, I was called in for an urgent surgical assessment. I had a large parastomal hernia. I needed surgery.

Well I saw my surgeon – he had completed my ileostomy journey with a total proctectomy in March 2019 and had only discharged me a few months previously – and we discussed options. He brought up the images on his screen in clinic and yep, right there was a huge hernia.

I, of course, knew it was there; I could *feel* it every damn day. I was on a liquid diet on my terrible days and a soft one on the other days. I had to apply gentle pressure and heat most nights to get the hernia to fall back into the cavity it was coming out of, which was not only frustrating but painful too. This would continue throughout the summer, right up until surgery day.

Let’s preface this by saying I adore the NHS.

This pandemic has both made me love it more – because it has continued to be excellent despite it – but also dislike it. That comes from the fact that the pandemic pushed it to its breaking point and then some. I needed emergent surgery – not an emergency or urgent but the next level down, I could not not have it done, basically – and I hated adding to that. I was scared. Scared of being in hospital during such a heightened time. Scared of getting Covid. Scared of it not being fixable.

But my surgeon reassured me, told me that was a normal response. This type of surgery was going to be complex, and not without worry – due to my history and the pandemic – as well as the recovery process being very long too. We mutually decided that he would try a new approach / technique – primarily because I wanted him to do his best work and secondly reoccurrence was the main worry, and with this ‘new’ approach it would give me the best chance at that being low, thus avoiding more surgery on the same area / hernia in the future.

I had a top hat hernia repair.

This means that I have both biological and synthetic mesh keeping the repaired cavity that my hernia ruptured through, and the neck of my intestine that forms my stoma, protected.

This particular approach gives me a 70% chance of little to no reoccurrence. [“Parastomal hernia repair using the “Top Hat” technique – an initial experience in 30 patients at Memorial Sloan Kettering Cancer Center” by Michael J. Fitzgerald]

I spent a total of five days in hospital. Three of those were the weekend and a bank holiday. By the time the surgical team were back on normal working hours; I was without my PCA, abdominal drain and my new stoma was functioning to its normal capacity. I left hospital with seven days of pain relief. I got this topped up for a month supply of Amatriptyline from my GP. At my eight week post op check in with my surgeon, we saw no sights of reoccurrence and I was off pain medication completely.

Of course, in some cases, not operating is also a viable option.

In many cases, most parastomal hernias are relatively asymptomatic. People can describe a sense of fullness or tightness, or a heavy weight to the parastomal area that is not painful, but uncomfortable. Treatment can begin with lifestyle changes, such as losing weight or quitting smoking, and wearing an abdominal support belt. Keeping the hernia from growing in a key element here, by following the above advice. A stable hernia of a small size is best managed without surgery.

However, about 20% of parastomal hernias are severe enough to need surgical repair. This can be the case when a loop of bowel becomes trapped in the cavity, resulting in obstruction or strangulation. Resolution of that through early detection of a hernia is key to avoiding emergency surgery for bowel obstruction, followed by a hernia repair.

Things to consider: the post operative side of hernia repair.

I am a well seasoned colorectal surgical patient, so my specific thoughts about post operative care were centred around rest and reducing reoccurrence.

With this particular approach to hernia repair, there are alot of sutures that are used to anchor the mesh in place. Both types of mesh behave differently once implanted into the body – the biologic can sometimes break down and ‘melt’, where as the synthetic has a more lasting effect and holds up for longer. Using both, give a unique post op experience.

At around six weeks, I felt a POP of pressure on the right side of my stoma. I reached out to my surgeon and he said it was likely an anchoring suture finally releasing itself, which meant the mesh was settled in place. The feeling of mesh inside you is quite unusual; it is a foreign body so some body’s can reject it – a viable concern, documented in the outcome of the top hat repair data as a ‘risk of surgery: reject of material’.

Besides that, I’ve felt well within myself for the entire time of being in immediate post op. Today makes it twelve weeks since the operation and I honestly have no complains. I have adapted well to my new stoma – despite its stubborn need to keep the formation sutures present for almost two months! – and I’ve found a happy medium of understanding the reality of this repair and the gratitude of being able to have such a smooth operation and recovery during a pandemic.

There has been no negatives that I can see, despite the current climate of healthcare in the UK. I feel incredibly lucky and grateful to received my care as well and as positively as I have done.