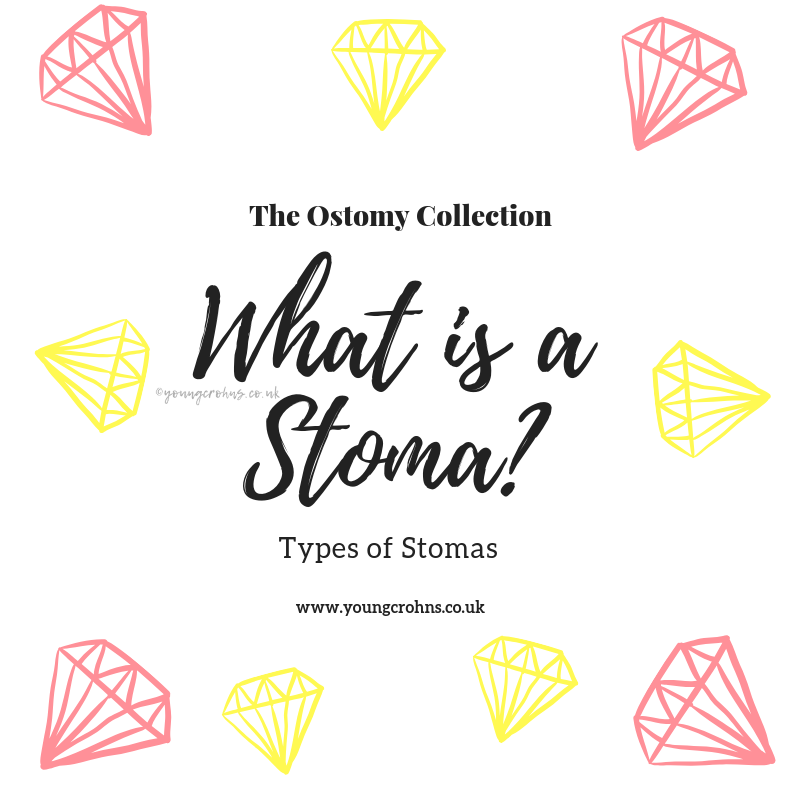 If you are looking for the other posts in the ‘What is a Stoma?’ series, you can find them here.

Welcome to my new blog series on “What is a Stoma?”

This is aimed as providing educational information about why, how and when ostomies are formed; dispelling common mistakes and myths surrounding them, giving advice on how to manage the basics of a stoma, navigating ostomy supplies as well as exploring not only physical landscape of living with a stoma but the mental challenges too. Over the next five Tuesdays, I will be sharing the information I have gathered and produced in a simple and understandable manner.

I currently live with a stoma and have done for a little over a year due to Crohn’s Disease. In that time, I’ve learnt to not only love and accept my new digestive system but I’ve also gained some wisdom and learnt some valuable lessons. I consider myself ‘new’ to all this so please don’t think I am spouting and preaching all I know; I’ve spent time at the end of every week’s post highlighting other great sources of information including fellow ostomates, ostomy supplies and the medical profession.

Owning a stoma is a very individual journey so I appreciate this might not be everyone’s cup of tea.  If you enjoy anything I’ve written please share it on social media! Any comments, please leave those too! I want to help raise much needed awareness for what and why stomas are; let alone just why they are so damn live changing.

What is a Stoma?

‘Stoma’ comes from the Greek word meaning ‘mouth’ or ‘opening’. And when you see one, this makes complete sense! Typically, when stomas are talked about they are referring to one of the three most common types of stoma. But that is not an completely exhaustive list of all types of stomas. I will be discussing these three main types but will touch on others when I look why stomas are created.

Most common and most commonly used to describe a ‘stoma’ is a colostomy.  This type of stoma diverts faeces from the colon into an appliance attached to the abdomen, typically on the patient’s left hand side.

Also used to divert faeces is an ileostomy. This stoma is formed from ileum – small bowel – and is typically placed on the patient’s right hand side.

These two types of stoma get mixed up because they both are formed from bowel and divert faeces. Both are formed for many different reasons but are managed and looked after very differently.

Thirdly, there is a stoma called a urostomy. This stoma diverts urine from the kidneys into an appliance attached to the abdomen and is formed from a small portion of small bowel.

These three stomas are all red and moist in appearance. The stoma has no nerve endings, and a health stoma should look and feel like the inside of your cheek.

What is a Colostomy?

A colostomy is formed when injury, illness or a problem with the digestive system does not allow faeces to pass through the anus. It is usually a partial removal of the colon which can not be reconnected together again. The new end of the colon is diverted through the abdominal wall and waste matter is collected on the outside of the body in a bag.

As this stoma is formed form colon, the bowel movements on this stoma tend to be regular and more solid. The appliance that collects waste is usually a closed bag without an opening at the bottom to empty / drain the output. The appliance is removed and changed as and when needed. Colostomies are usually placed on the left hand side of the patients abdomen if the operation involves the descending colon and the rectum. If the colostomy is temporary and / or reversible, it can be placed on the right hand side if the operation involves the ascending or transverse colon.

Being formed from bowel and specifically colon; this stoma is quite large and flat in circumference.

What is a Ileostomy?

An ileostomy is also formed when illness, injury or a problem with the digestive system doesn’t allow faeces to pass through the colon. They are used to divert waste matter from passing through some of the small bowel and / or the full length of the colon. Some ileostomies can be temporary, as they are used to surgically rest the bowel due to illness or trauma.

Like a colostomy, an ileostomy means wearing a ostomy bag, typically on the patient’s right hand side. As this stoma is formed from small bowel, the bowel movements tend to be more liquid as the colon is unable to absorb the fluid from the digestive system. Typically, the output from this stoma would be like porridge and requires the user to wear a drainable bag, which they would empty 5-6 times a day. The appliance is changed on a regular basis, but this is determined by the user over time or on the advisement of a specialist nurse.

Being formed from bowel and specifically ileum this stoma can be smaller than that of a colostomy in its circumference, but usually is more spouty. This stoma is usually more active due to the fact it is formed from higher up in the digestive tract.

Management of this stoma can sometimes be tricky but becomes easier over time.

What is a Urostomy? An urostomy is formed when the patient needs a new way to store and pass urine, typically from an obstruction in the urinary system, injury or in some cases, when the bladder is removed.

Like the other two stomas, this is also formed from bowel – specifically taken to form the spout of the actual stoma and is connected directly to the urethras – and is also red in appearance. As there is no value to help control the flow of urine from the kidneys – like there would be in your bladder –  this stoma is very active and requires the patient to wear a drainable bag with a tap at all times. This is emptied during the day like an ileostomy but at night can be attached to a leg or night catheter bag to help aid sleeping.

Management of this type of stoma can be tricky also; as the stoma is formed of bowel; infection and UTI’s are common. Leakage can also be common place.

*NB: The above reading is material that is consistent, does not conflict with each other, and compliments my own words*

More on the surgeries and the reasons as to why the different types of stomas are created in next weeks post!