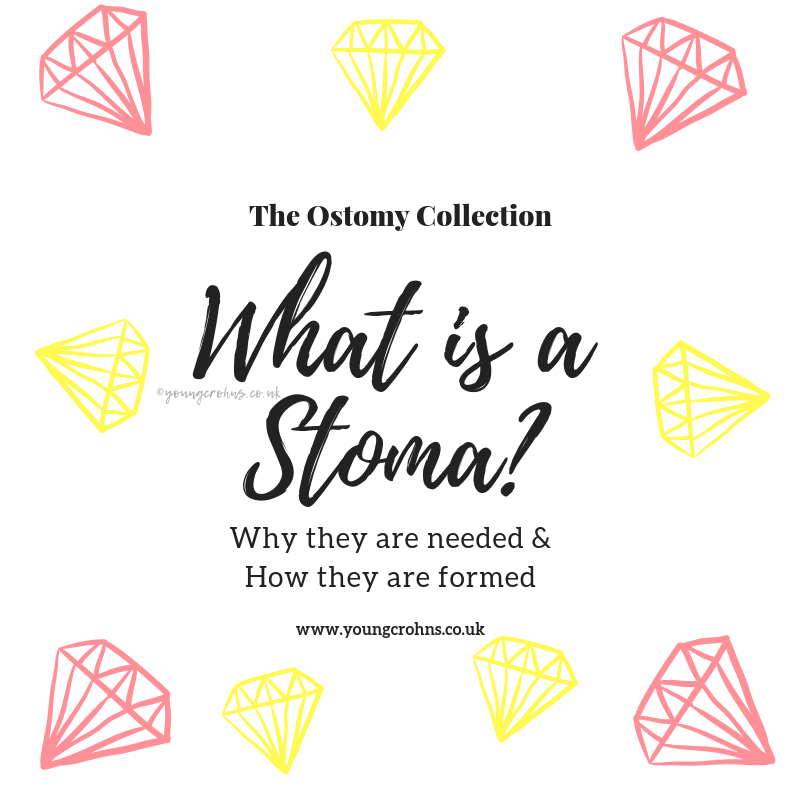 If you are looking for the other posts in the ‘What is a Stoma?’ series, you can find them here.

Welcome to Part II in my new blog series on “What is a Stoma?”

This instalment covers the Digestive System 101, why and when stomas are needed as well as how they are formed surgically. Hopefully this gives you some insight into the many different reasons why stomas come to be, a basic but solid understand in the digestive system before I talk surgery!

This is not an extensive list of why, when and how stomas are created but that of the most common. Comments are welcomed, enjoy! xox

Why Stomas are Needed Above is a diagram of the Digestive System in its basic form. It goes from mouth to anus. Food will pass through four major organs in turn: The Oesophagus, Stomach, Small Intestine – also know as the small bowel – and finally the Large Intestine – also known as the colon.

When food enters the system, it is broken down by the action of the teeth and the presence of saliva produced by the glands in your mouth. As the food becomes smaller  it is swallowed and passes down through the oesophagus and into the stomach. Here, it is mixed with bile from the Liver and digestive enzymes from the Pancreas.

As the stomach starts to contract – known as peristalsis – it creates boluses – a small rounded mass of chewed up food – with the bile and digestive enzymes. It then continues to converts this into chyme  – partially digested food.  Dependent on the quantity and contents of the stomach, this process can take anytime between forty minutes and a few hours. The stomach of an average adult can comfortably hold up to a litre of food.

Once food has been processed into the chyme, it then moved into the Lower Gastrointestinal (GI) Tract. The Lower GI Tract consists of the Small Intestine and the Large Intestine. Both are very important in the act of digestion. Once food has been converted into chyme, the absorption of nutrients and removal of waste occurs in the Lower GI Tract. And this is where most stomas are formed and created from.

Movement throughout the Lower GI Tract happens via peristalsis. This is the constant contracting sequence of the bowel in which it moves matter through it, absorbing nutrients and removing water. Waste matter spends 6-8 hours in the small intestine, compared to 12-40 hours in the large intestine. This time difference is mainly based on the fact that water is being pulled from the waste to help it form into faeces.

Why would you need Ostomy Surgery?

You may need ostomy surgery of the bowel if you have:

How they are Formed

Three main types of ostomies can be created – Colostomy, Ileostomy and Urostomy. But inside of all those, there are several ways to create that type of ostomy, with removal or rest of partial elements of the lower GI tract.

A Colostomy involves creating an opening in the abdomen and pulling through a portion of the large intestine (colon). The consistency and frequency of the output from the stoma depends on the type of colostomy performed. There are four main types: ascending, transverse, descending, and sigmoid.

Ascending colostomy – This procedure is performed in the ascending colon, placed on the right side of the abdomen. As the output that is produced can be liquid to semiliquid and rich in digestive enzymes, it often irritates the skin around the stoma (peristomal skin). This is most commonly performed to rest the bowel for a subsequent surgery to reattach the colon together again.

Transverse colostomy – This procedure is performed in the transverse section of the colon, across the middle of the abdomen. It’s not very commonly used except in emergencies and injuries. The output from this stoma can be liquid to semiliquid in consistency but is less irritating to peristomal skin.

Descending colostomy  – This is performed in the descending portion of the colon, on the left side of the abdomen. Output from this stoma is semiformed as most of the water has been absorbed as the waste material moved through the ascending and transverse colon. This colostomy is most common; used for IBD, cancer, bowel incontinence and emergencies alike. However, this type of colostomy can be reversed as the rectum and anus is left to rest.

Sigmoid colostomy – This is performed in the sigmoid colon, on the lower left side of the abdomen. The output is a normal formed consistency, a lot like normal bowel movements. It may also include the removal of the rectum and anus, making this colostomy permanent.

A Ileostomy involves creating an opening in the abdomen and pulling through a portion of the small intestine (ileum). The consistency of the output from the stoma is usually liquid or porridge like and occurs several times a day, usually after meals. In many cases, the colon is removed and its function of reabsorbing water and electrolytes is partially carried out by the small intestine. This ostomy tend to be called an ‘end ileostomy’ as the whole of the colon has been removed. Sometimes, the rectum is left so that the stoma can be reversed but this is then down to patient choice and their condition. Ileostomies are most common in a procedure called ileoanal reservoir surgery also known as a J-Pouch surgery. This is a two step surgical procedure and may be an alternative to permanent ileostomy. In the first surgery; the colon is removed, and a temporary ileostomy is created. It is usually called a ‘loop ileostomy’ as it is a loop of the ileum being brought out of the abdomen in preparation for the task of reversal; in which the loop is sewn together and reinserted into the body.

In the second procedure; the ileostomy is closed, and a section of the small intestine is used to create an internal pouch to hold stool. This pouch is attached to the anus and the rectal muscles hold it in place and prevent stool from leaking. Patients who have this surgery have between 6 weeks and a few months of living with a stoma knowing that this will be reversed. A Urostomy, also known as a urinary diversion, is performed to divert urine from a diseased or damaged section of the urinary tract. It is usually performed after the removal of the bladder. It involves creating an opening in the abdomen for the discharge of urine. There are a number of surgical procedures available.

Ileal Conduit – This type of diversion is the most common.  It involves attaching a piece of the small intestine (ileal conduit) to the two ureters (the tubes that carry urine from the kidneys). The other end of the ileal conduit is brought out through the abdomen and becomes the stoma. Despite being for the discharge of urine, it looks like and is managed similarly to that of a ileostomy.

All ostomy patients will have wear an ostomy bag. These bags are wore 24/7 until they are needed to be changed. The type of ostomy bag depends on firstly the type of stoma and then the patients personal preference or the recommendation taken from the Stoma Care Nurse (SCN) who they see following surgery and whilst they live with an ostomy.

Next week is all about living with an ostomy and how to manage it!

"What is a Stoma?" Part I: Types of Stomas