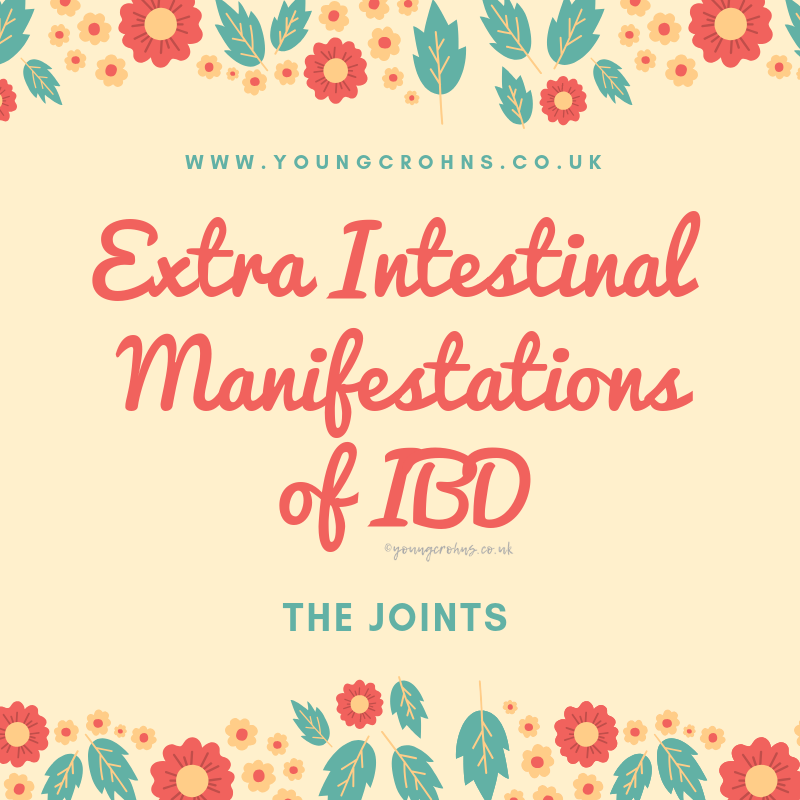 Joint pain or pain and swelling of the joints are the most common extra intestinal manifestations associated with Inflammatory Bowel Disease. Around 1 in 3 people with Crohn’s or Colitis will experience these. The type of Crohn’s or Colitis you have, how severe it is and time since diagnosis can all affect how likely you are to have joint problems. Why this happens is not clear but proteins which normally protect the body are over produced and cause inflammation, including a protein called tumour necrosis factor (TNF).

There is defined overlap in the causes between inflammatory arthritis and Inflammatory Bowel Disease. It has been suggested that because joint problems are most often diagnosed after the initial diagnosis of Crohn’s or Colitis, environmental triggers, genetic factors and changes in the immune response are similar for both conditions. A particular gene called HLA-B27 – a human leukocyte antigen variant B27 is more common in people who have this type of arthritis.

This relationship between these two apparently unrelated organ systems sometimes known as the Joint – Gut axis.

It is believed that the chronic inflammation in the intestines or colon can trigger the immune system to start an inflammatory process in the joints or tendons. In some people with joint pain and Crohn’s, the joint problem could be related to medication side effects or intolerance rather than true arthritis.

There are 2 types of joint problems that can occur in patients with IBD: arthritis, which is inflammation, and arthralgia, which is pain without inflammation. Arthralgia is more common among patients with IBD, occurring in 40-50% of patients, which is a rate similar to that of the general population; where as arthritis occurs in approximately 15-20% of Crohn’s disease patients and approximately 10% of ulcerative colitis patients at some stage during their disease course.

The joint problems related to Crohn’s and Colitis are a type of inflammatory arthritis known as Enteropathic arthritis: acute or subacute arthritis in association with, or as a reaction to, an enteric (usually colonic) inflammatory condition.

Symptoms of peripheral arthritis include:

Symptoms  of axial arthritis include:

Axial arthritis typically affects younger people and rarely continues in patients who are over 40. It can lead to fusion of the bones of the vertebral column, and this permanent complication can lead to a decrease in range of motion in the back and a limitation of rib motion that impairs the ability to take deep breaths.

It is not always easy to determine whether the arthritis is linked to the intestinal condition. Diagnosis of joint problems is usually by clinical examination and a history of your symptoms. You may also have a blood test to look for signs of inflammation. The questions your doctor is likely to ask depends on where your joint problems are. X-rays are sometimes used to exclude other forms of arthritis. Imaging using ultrasound or MRI can detect inflammation in the peripheral joints even at a very early stage.

Drug treatments, exercise and physiotherapy can all be helpful in managing symptoms of arthritis. One of the main targets of therapy is controlling inflammation in the gut.

The aims of any treatment are to:

But the treatment approach depends on a few factors:

In most cases, doctors manage the symptoms of peripheral arthritis by controlling the inflammation within the colon. Once that has subsided after a course of a medication such as prednisone or sulfasalazine, joint pain generally disappears. Similarly, the newer biologic agents such as Infliximab, Adalimumab, Golimumab and Ustekinumab have also shown to be effective in reducing joint inflammation and swelling. Only axial arthritis seems not to improve as the intestinal inflammation resolves. Unlike peripheral arthritis, there is no correlation between treatment of the underlying IBD and improvement in axial arthritis symptoms.

Within the general population, people with peripheral arthritis may use nonsteroidal anti-inflammatory drugs (NSAIDs) to reduce pain and swelling of the joints. However, as a rule, these medications are not an option for everyone with IBD because they can prompt a disease flare by irritating the intestinal lining and intensifying the inflammation. But it should be noted that some people with IBD can tolerate NSAIDs and find these medications helpful in relieving symptoms of arthritis; whist the use Corticosteroids can treat the arthritis symptoms as well as IBD.

In addition to medication, doctors may recommend resting the affected joint as well as the occasional use of moist heat. Range of motion exercises, as demonstrated by a physical therapist, may also be helpful. Peripheral arthritis  or Peripheral Spondyloarthritis(pSpA) usually affects the large joints of the arms and legs, including the elbows, wrists, knees, and ankles. The discomfort may be “migratory,” moving from one joint to another. If left untreated, the pain may last from a few days to several weeks.

Type 1 peripheral arthritis is affects around 4 – 8 in 100 people with IBD. It is usually associated with gut activity, so if you have a flare-up of gut symptoms you may also experience a flare of joint problems.

Attacks of Type 1 peripheral arthritis usually have a limited course that lasts less than 10 weeks. Effective treatment of Crohn’s or Colitis improves joint symptoms for people who have this type of arthritis. As the duration of joint inflammation is short the potential for permanent joint damage is much less.

Type 2 peripheral arthritis affects around 2 – 4 in 100 people with IBD. The symptoms of this type of arthritis are independent of gut activity.

The joint inflammation here may last for months or even years and treatment of Crohn’s or Colitis does not improve these joint symptoms. But if the inflammation in the joints is not controlled effectively it can go on to cause permanent joint damage.

Treatment of underlying gut inflammation is often enough to treat Type 1 arthritis. Short-term non-steroidal anti-inflammatory drugs or injections into the joint can provide relief of the symptoms. Steroid tablets can also be effective but are usually used for as short a time as possible.And where symptoms continue Sulfasalazine and Methotrexate are often prescribed. However, if the symptoms  do not respond to these treatments, Anti-TNF therapy may be effective. Also known as spondylitis (spondylo meaning ‘spine’ and -itis meaning ‘inflammation’), axial arthritis produces pain and stiffness in the lower spine and sacroiliac joints (at the bottom of the back). Interestingly, and especially in young people, these symptoms may come on months or even years before the symptoms of IBD appear. Unlike peripheral arthritis, axial arthritis may cause permanent damage if the bones of the vertebral column fuse together – creating decreased range of motion in the back.

Treatment for Axial Spondyloarthritis (AxSpA) will be managed with a rheumatologist and focused on exercise. This often includes intensive input from a specialist physiotherapist. They will work with you to create an exercise plan that can ease symptoms such as stiffness and pain.

The exercise plan is likely to include:

Non-steroidal anti-inflammatory drugs (NSAIDs) including ibuprofen, can be used in the short term – usually less than 21 days; use over a longer time can increase the risk of a flare-up of IBD. Where NSAIDS have not been effective Anti-TNF therapies may be effective. Physiotherapy and Anti_TNF treatments can be used when IBD is active and in remission, but NSAIDs can only be used once the IBD in managed and under control.

Other Causes of Joint Problems

Inflammation of a joint can be caused by bacterial infection, this is known as septic arthritis. Bacteria can enter a wound and travel through the bloodstream to an affected joint or may infect a joint directly after an injury or during surgery. You are more at risk of this if you are taking immunosuppressant medication to treat your Crohn’s or Colitis.

Stop smoking – Smoking has been found to be a high-risk factor for arthritis.

Try gentle exercise – Exercise can help joint problems and improve mood. This can be quite a trial and error process finding the right thing for you is worth it.

Eat well – Eating a healthy balanced diet that works for you will ensure you get all the nutrients you need. This includes fruit and vegetables, starchy foods, some milk and dairy products and some protein.

Look after your joints – There are a few ways you can protect your joints by reducing the stresses on them.

Tell your IBD team if you have pain in your joints! – Keeping your team informed about changes to your condition can help the assess you and prioritise any testing which might make detecting problems earlier, rather than later.

Next time… we explore when and how IBD can affect the bones.