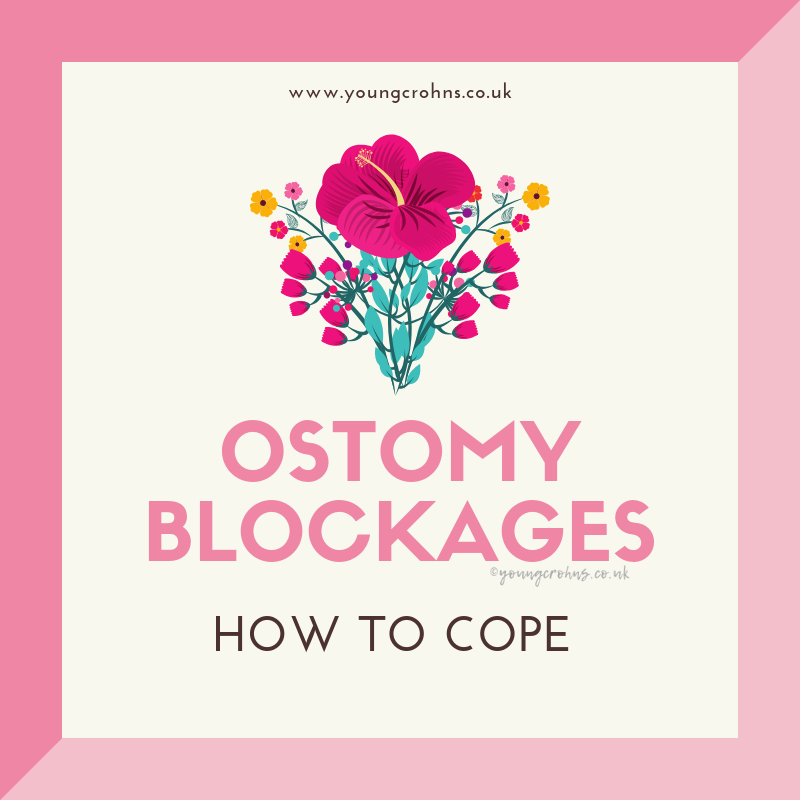 Disclaimer: This information is based on my own personal experience since my ostomy surgery in August 2016 and is not intended to replace medical advice from a trained professional. If you are requiring advice regarding your own stoma, routines which might benefit you most, or products that suit your needs best, please contact your stoma care nurse for further assistance.

It is early December and I am sat here dealing with a problem. A problem which I’ve suffered with in the past and one I will probably suffer with in the future; an partial ostomy blockage.

You see, right now, my mind is cast back to those pre surgery talks I had with my IBD team. I wasn’t naive; I knew surgery would be life changing, not only in the foreseeable future, but forever. I would have to adapt to these new set of circumstances. They told me that ostomy surgery recovery would take six to twelve months physically, but longer elsewhere. Elsewhere, I hear you say, what is that? Well, I assumed it was mental recovery. But it was more about my body learning to adapt to all the newness inside of me. The gaping hole of what having no colon actually meant. All the potential issues that this would have on my new digestive system firstly, then how my disease would ‘react’ and finally, how I would cope with all of this. And there was never any real mention of specifics; no one ran down a list of all the possibilities that could happen, post surgery, once my scar healed and I was living again. I knew quite abit about the immediate post op problems because I read up on them, delving into some of the issues that would or could happen to me in my life as an ostomate. I came through the surgery, had an uneventful post op period and went off to discover life with a bag. But what I’ve found to be my biggest challenges have been: a) disease reoccurrence b) dehydration and c) ostomy blockages.

I am finding that blockages are quite common. And with me, they seem to be happening when I least expect them; leading me down my own personal rabbit hole as to struggling to find out why. And sometimes, there is no rhyme and no reason as to why, it just happens. That is the hardest part of all. I am a very conscientious person, I like to know what is happening. And when I don’t know or understand why my body is misbehaving, I get sad. I get frustrated and I get angry. And sometimes I wish I’d never had surgery and had given more faith and determination towards a new medications, but my mind pulls me back to the agony that I was once in and I know that cutting out my disease was the right choice.

It still doesn’t get rid of the anger, justifying to myself my own decision to have surgery. It makes me more anger because I wonder what on earth I have done to causes myself so much pain.

So what can cause an ostomy blockage?

There are two types:

Non-mechanical obstructions happen when there is an interruption of peristalsis in the bowel. If this is temporary it is called ileus , caused by abdominal or pelvis surgery, infections such as gastroenteritis or appendicitis, opiate pain medication or electrolyte imbalance. If the lack of peristalsis becomes chronic or long term it is then called pseudo-obstruction linked to muscle and nerve disorders like Parkinson’s and MS, Hirschsprung’s disease and nerve injuries.

How do you identify and resolve a blockage?

Not all of these symptoms will occur, or happen at the same time. There is variation from person to person, and it best to identify which symptom would be most troubling to you. To help resolve the blockage you can:

When do you need to seek help?

Warning signs for needing to go to hospital:

In the eighteen months since having my ostomy, I have had three admissions due to blockages that needed medical intervention to resolve. I have also had two partial blockages. Neither of these are preferable over the other; as they are painful, annoying and frustrating. However, they do need to be taken seriously. My admits have lasted from 48 hours in the shortest instance and up to 10 days in the longest instance. The longest admit also discovered my ongoing IBD flare which was causing so many blockages due to inflammation. Some thing I now know about and take seriously, in my own case. This is the same for anyone else; you know your body the best. You know your disease the best. And you know your own habits and normality the best. Don’t let a doctor tell you otherwise, because what is normal across the board, might not be the case for you.

In the majority of cases, ostomy blockages have been caused by food. upon discharge from surgery, I was given a list of what to ‘avoid’ because they could cause blockages. This advice was crucial in the first couple of months; as I settled down into my ostomy life and my bowel relaxed and got used to being to a stoma. In the months the followed surgery, I saught advice from other ostomates regarding diet and how to avoid creating blockages; and it was very helpful. However, what kept creeping in were the following ‘no-go’ foods:

I learnt to adapt my food choices in the beginning. But I am not one to avoid food, especially when these foods provide nutritional value. Eric from VeganOstomy had some great tips on being able to eat these but avoid a possible food-related blockage that have really stuck with me:

And sometimes, it can be the safe food that is causing the problem; so back to the drawing board. Thinking over the above tips to see which one I didn’t do enough of, how I can avoid it next time. It’s not possible to avoid blockages forever, and occasionally you will slip up. But that is part of life, fucking up. Learning how to deal with it, that’s the progress part.

My point here is, don’t be afraid of food that might cause a blockage. Enjoy your new life with your new stoma. A stoma shouldn’t stop you from living a normal life. And for me, eating is a huge part of having a normal life. So sometimes, I eat popcorn. I eat sweetcorn. I make sauces with mushrooms in. I eat raw fruit and vegetables. But I also chew well, drink plenty and know when my output has stopped and cramping begins; I need to take action. I need to resolve my own blockages. Hopefully with the advice above, you be able too.

The IA’s resource on Bowel Obstructions

SoBadAss’ ‘What to do with a Stoma Blockage’

Turning a Corner: An Update