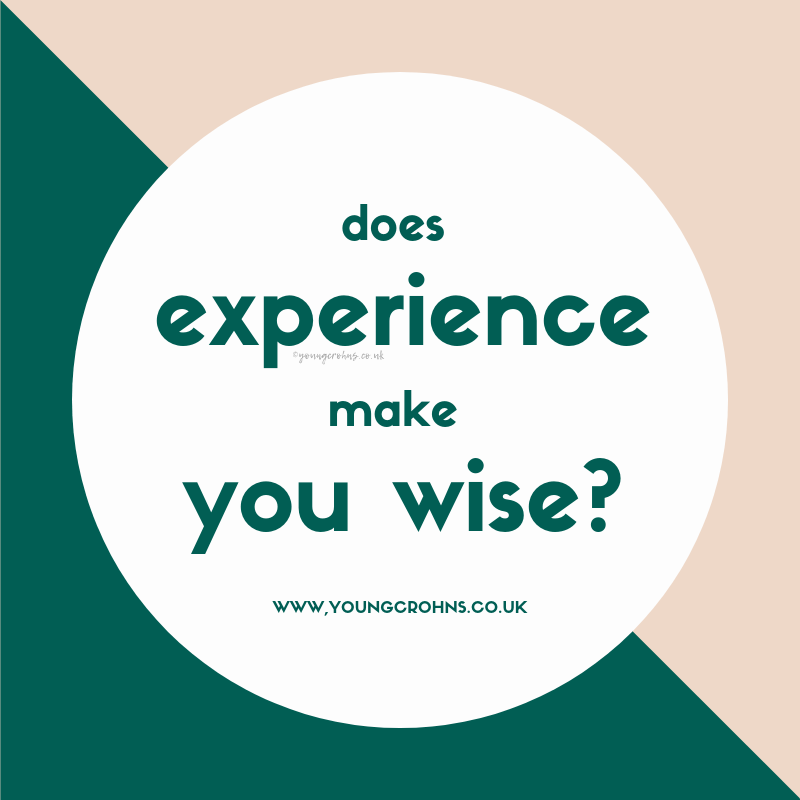 I remember going to my first outpatient appointment when I first felt ‘well‘ and I wondered when would I get used to this?

It also seemed to be improbable too; who would want to get used to this? To the barrage of appointments, procedures and the fearful anxiety of a chronic illness?

But there was something about the routine of being ill in that first year or so, that helped me feel comfortable. I failed medications within a couple of months, so I wasn’t far away from the hospital for something or another. I always had a eight weekly appointment for clinic and then once my medication was changed to a regular IV infusion, I was there for that too. I would have bloods drawn before hand, I’d more than likely have a related appointment with a different department or I was in for a procedure. I had something pretty much every month, as an outpatient.

I soon learnt tricks on how to make the most of those appointments, learnt how to rock a scope prep, became a pro at adapting and rescheduling my calendar to accommodate my illness and it’s symptoms. I learnt alot from being sick. Then I got some news – I was in remission. The length between appointments grew longer and I only came in for Infliximab. I had a good nine months before my symptoms began to become troublesome again.

In those nine months, I changed jobs and began to see some light at the end of a dark tunnel. I focused my lessons on sharing my experience online and with my support group. I began living outside of my illness – right now that feels like a lifetime ago and is hazy, but it was only 2015.

The next chapter of my life with Crohn’s disease was one that focused around surgery and recovery.

I learnt the most here. I had two major surgeries and multiple admissions in between them; where we grappled with how to control the ultimate colon-destroying flare up I was having. It might have taken me a while to really appreciate the shit storm I was in, but once I understood I took back some control.

I began being more assertive – like I had always wanted to be! – and spoke up when things weren’t right or how I expected. I called out people on particular issues but also knew that nothing or no-one was perfect; some mistakes would be made. The important things were done correctly and in a timely manner. But the best thing I did was build a relationship with my nurses – both IBD and stoma care, as well as my TPN nurse. I wanted to be a good patient, despite my disease being a little shit during that time. And I felt how much my stoma surgery changed things for me; I wanted to keep that momentum going.

Since then, I’ve grown more and more in confidence. I successfully transferred my care when I relocated in 2017 and have continued on my ‘mission’ of being a passionate patient advocate for those with IBD.

Why is experience important?

When I think about my experience, I often wonder about the following: ‘Am I more wise or cautious because I know more? Or am I more relaxed because I can anticipate what is needed?’

I think in some respects, having more experience has helped me out of a few issues when I could have simply ignored what was going on. A ‘good’ example of this was the summer of 2017: I was in the mist of the length process of getting my care from Birmingham to Peterborough, I’d begun experiencing alot of symptoms which were not the norm for my pattern of flares. And no one could really tell me what was happening or why it was going on. I had alot of conversations that just ended up with ‘we’ll treat these symptoms and hope it settles‘ and in some respects that is a logical and familiar thing to do. But they didn’t go away. They got worse. I had four admissions in almost two months until we found out I had had – and would continue to have – twisted bowel behind my stoma. I was one day away from surgery when my X-Ray finally showed it, after one film was done on every single admission and showed nothing.

I kept going back and asked to be admitted. I kept on asking for what I needed and at times this need was strong painkillers. I was labelled as ‘drug seeking‘ – I was not, I was in pain and knew what would help me because of my experience. I had a couple of tough moments that summer but I came away better. Better in alot of respects. If I had backed down, I’d ended up in worse shape – possible with less small bowel, a relocated stoma and on liquid feed.

Does it have its draw backs?

Of course it does. I do wonder:

‘Am I my own worse enemy? I always feel like because I am an informed patient and my team know this, they tend to not ask more questions and leave me to my own devices.’

There is a line between being knowledgeable and being a know-it-all patient. I really do believe in self advocacy and being aware of your illness but knowing too much can be detrimental to some who are more emotional or mentally unstable. I have been susceptible to this myself, because sometimes I just want some reassurance that what I am doing, or what I am experiencing is normal and is nothing untoward. Part of this comes from anxiety but the bigger part comes from just needing some contact.

How can you ‘avoid’ this?

The most basic way to avoid this, is to ask questions.

Even if you know part of the answer, ask the questions.

Sometimes, I do this because I want to hear the most current information they have. This usually means going through latest scan reports and blood work. From there, I can update my knowledge of where I currently am, with my own disease. Sometimes, things get lost or not said and this can make being on the same page tricky.

When it comes to meeting a new doctor – either in a new speciality or a change of consultant in the department – I go in and state my own prior knowledge, so they can be aware of what sort of patient I am. This can be as simple as ‘I am very involved in my care and I take an deep interest in what is going on and what is expected. So please be honest and upfront with me.’ This has served me well of late.

September: Going Back to Zero

Travelling with IBD and a Stoma