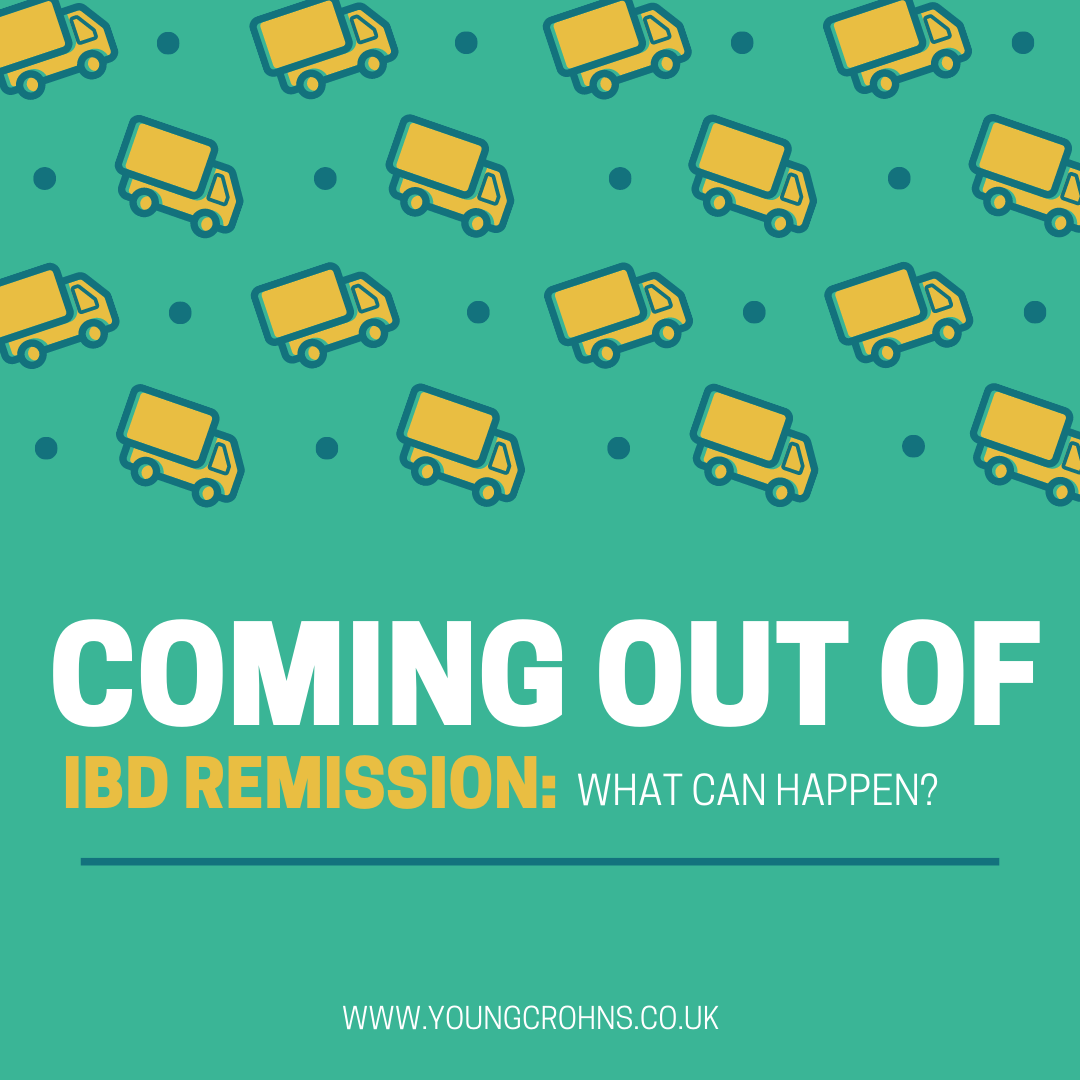 I’ve had a lot of time – a decade – to think about remission.

When my doctors said remission to me back in 2012 – I was less than a year into my official IBD journey – and I honestly thought “great, that’ll make things easier! Welcome back to normal life!”

I feel pretty foolish now because nothing about remission then was easy. It was harder than flaring because I didn’t know or fully understand all of my triggers. And they would ebb and flow as time went on. I learnt alot during the next six months to a year when I became so fearful of needles  – I was doing Humira injections fortnightly, pre citric free – , gained a ton of weight and still experienced “mild” symptoms.

These ‘mild’ symptoms persisted for a while, and lead me to a course of steroids and a routine colonoscopy. This showed small bowel Crohns and I was immediately triaged for biologics again – this time, Infliximab. This worked on its own for almost eighteen months before it didn’t, requiring me to add in Methotrexate, despite high antibodies. We were playing a waiting game for Veodlizumab to come to market in Autumn 2015.

Thus began what I like to call ‘ my road to surgery’ because I’d worked my way through all the traditional methods of medications designed for IBD in the first 6 months I had IBD. Biologics were the only treatment options that seemed to keep most of my symptoms at bay and in the long term, reduce the inflammation in my bowel.

But in 2016 I underwent my first surgery to have a stricture removed around my TI (terminal ileum, where small and large bowel joins) and while that was successful, being on no medication – because there was nothing new for me to try – I flared and flared HARD . Within 4 months of that surgery, I went back in for a subtotal colectomy after an emergency scope found my colon to be bleeding, ulcerated and generally beyond repair.

For those who think surgery is a cure for IBD, is it not. But it can be a very successful treatment option. And surgery definitely changed my life for the better, despite ‘complications’ and subsequent issues. I would do it all again. But the surgery did not mean remission for me. I went back on to Vedolizumab which worked superbly without my diseased colon holding me back.

It would put me into deep remission – normal blood markers, no pain, no stoma issues, hydrated and eating well – I made the decision to come off it and see how things went without it. I had almost eighteen months – at the beginning of the pandemic, no less! – without it and felt great. But then, things started to head downhill. Obstructions. Nausea. Output issues and dehydration. Abdominal pain. Blood marks back up high and needing testing to see what to do next. That was last Spring. Here we are again, not quite settled down with my IBD, waiting for the same testing, like a weird deja vu.

So over the last eleven years of having IBD, I’ve probably had four periods of what I consider ‘remission’ – low symtpoms, no pain, no bleeding and being able to eat and keep hydrated.

But remission always feels like a tricky phrase to use, to understand and comprehend what that means for patients, because we all differ so much, and we all have different expectations from what could be remission, or ‘low to no symptoms.

As IBD is a chronic illness, there unfortunately might always be a symptom or two that isn’t completely fixed or remedied by medication, surgery or lifestyle and dietary changes. Accepting that is sometimes really hard, especially if you have fought so hard to get to remission in the first place.

But being open-minded and realistic is key to approaching your own remission.

Here are a couple of polls I recently took from the IBD community on Twitter for their experiences in what remission is and means to them.

As you can see, the vast majority of those who answered did indeed achieve ‘remission’ or their own version of it, but then almost the same amount same came out of remission too.

What came from the conversations I had, was that remission is just one goal in a long list of possible goals when it comes to monitoring and maintenance of IBD. For most, they said that while remission was a lofty goal, an ideal set by clinicians in years gone by, there was a movement towards a better quality of life for patients, instead of relying heavily on clinical data – such as blood work, test results and symptoms scales.

These two particular points really struck a chord with me, this is the crux of why we do need a movement from the abstract construct of ‘remission’ in chronic illness care and towards an approach that sets personalised goals or milestones for patients. Thanks to Ian R and drake.homephone@gmail.com for allowing me to share their input.

I am not particularly fond of the phrase remission, nor do like to use it too much in a larger sense when I talk to people outside of IBD community about my IBD and its effects on my life. Mostly because I get the sense that remission to them is so linked with something going away that they struggle to understand when I get sick again – either they can’t quite believe it or that it’s such a big shame when it does occur.

Both bother me, at different levels, at different times, in different moods. so maybe some of this is how I choose to talk about and describe my illness. But that has been influenced by doctors who are now no longer touting the remission philosophy and more about a multifaceted goal for my disease.

So here, I draw a line and say that I replace ‘remission‘ with ‘milestone‘ l because that to me, makes sense. It won’t always be perfect – nothing is – but it’s something better than before. And I don’t always have to hit my milestone. That is perfectly acceptable.

Misconceptions about Living with a Chronic Illness