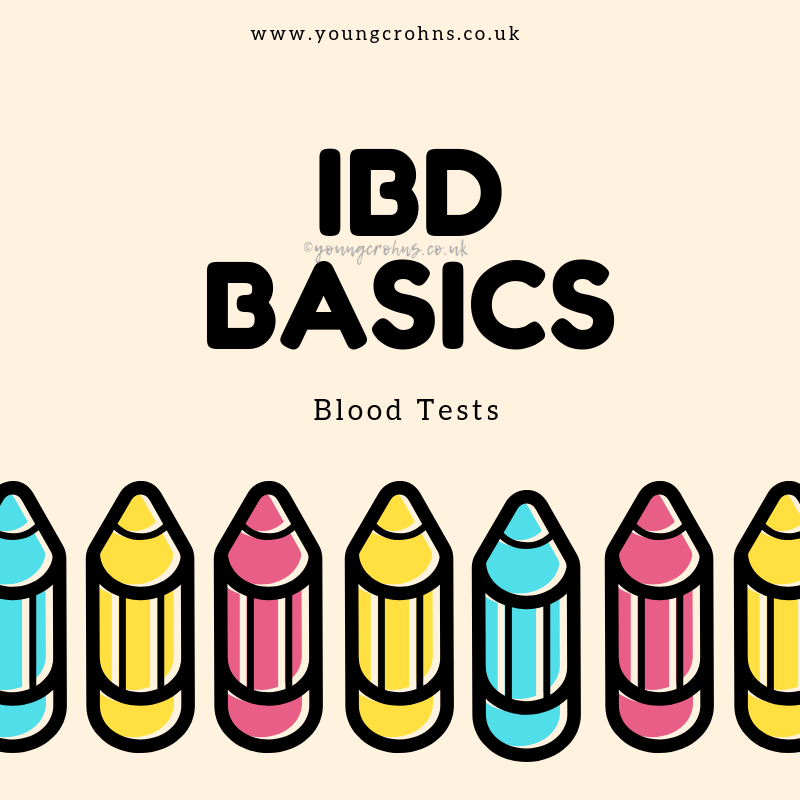 If you are looking for the entire ‘IBD Basics’ series, you can find them all here.

What are blood tests & Why are they important?

Blood tests are routinely used to assess your condition and your medications effectiveness. As IBD is a fluctuating, ongoing condition, it is likely that you will need to have some of these tests repeated from time to time. After your initial diagnosis, further tests – CT scans, MRI scans, endoscopy – may be needed to determine which treatments are most suitable for you, how well you are responding and whether your disease is in remission.

Drawing blood for laboratory testing is usually a relatively simple and quick procedure. A phlebotomist will typically draw a small amount of blood from a vein in your arm, which is then sent to a laboratory for analysis. Blood may be drawn in your hospital’s blood clinic, or at an off site collection centre; such as your GP surgery or an Urgent Care Centre. This depends on which NHS Trust your hospital is under and their procedures. Results are usually available a couple of days after, but this is dependent on the type of blood testing required.

Routine blood will look at four things: Inflammation and infection, anaemia, dehydration and low albumin or protein. These tests are done with the following:

Typical & Healthy Ranges for Blood Tests Common in IBD – in order as presented above.

This test measures the numbers, shapes, and sizes of various types of white blood cells listed above. The WBC differential count also shows if the numbers of different cells are in proper proportion to each other. Irregularities in this test could signal an infection, inflammation, autoimmune disorders, anemia, or other health concerns.

RBC (red blood cell) erythrocyte count: 4.2 to 5.9 million cmm
We have millions of red blood cells in our bodies, and this test measures the number of RBCs in a specific amount of blood. It helps us determine the total number of RBCs and gives us an idea of their lifespan, but it does not indicate where problems originate. So if there are irregularities, other tests will be required.

Platelet count : 150,000 to 400,000 mL
Platelets are small portions of cells involved in blood clotting. Too many or too few platelets can affect clotting in different ways. The number of platelets may also indicate a health condition.

ALT (alanine aminotransferase): 8 to 37 IU/L
This test looks at levels of the liver enzyme ALT. When all’s well with your liver, your score on this test should be within range. Anything higher may indicate liver damage.

Albumin: 3.9 to 5.0 g/dL
A protein made by the liver, albumin levels can be an indicator of liver or kidney problems

Hematocrit (Hct): 45% to 52% for men; 37% to 48% for women
Useful for diagnosing anemia, this test determines how much of the total blood volume in the body consists of red blood cells.

Hemoglobin (Hgb): 13 to 18 g/dL for men; 12 to 16 g/dL for women
Red blood cells contain hemoglobin, which makes blood bright red. More importantly, hemoglobin delivers oxygen from the lungs to the entire body; then it returns to the lungs with carbon dioxide, which we exhale. Healthy hemoglobin levels vary by gender. Low levels of hemoglobin may indicate anemia.

Creatinine: 0.5 to 1.1 mg/dL for women; 0.6 to 1.2 mg/dL for men (the elderly may be slightly lower)
The kidneys process this waste product, so elevations could indicate a problem with kidney function.

Potassium: 3.7 to 5.2 mEq/L
This mineral is essential for relaying nerve impulses, maintaining proper muscle functions, and regulating heartbeats. Diuretics, drugs that are often taken for high blood pressure, can cause low levels of potassium.

Sodium: 135 to 145 mEq/L
Another member of the electrolyte family, the mineral sodium helps your body balance water levels and helps with nerve impulses and muscle contractions. Irregularities in sodium levels may indicate dehydration; disorders of the adrenal glands; excessive intake of salt, corticosteroids, or pain-relieving medications; or problems with the liver or kidneys.

Calcium: 9.0 to 10.5 mg/dL (the elderly typically score a bit lower)
Too much calcium in the bloodstream could indicate kidney problems; overly active thyroid or parathyroid glands; certain types of cancer, including lymphoma; problems with the pancreas; or a deficiency of vitamin D.

More sophisticated blood tests are now being used to help distinguish between Crohn’s disease and ulcerative colitis. The newer tests look at proteins called antibodies, which are produced by the immune system. There are two antibodies of long-standing interest:

These antibodies are considered biomarkers, defined as measurable substances in the body that indicate the presence of disease. Many patients with Ulcerative Colitis have the pANCA antibody in their blood; patients with Crohn’s Disease are more likely to have ASCA in their blood. However, these antibody tests are not foolproof. In some cases, patients have neither antibody, while others who carry one type may actually have the opposite or neither disease.

Researchers are investigating other possible biomarkers that could be used to easily and inexpensively screen for Crohn’s Disease or Ulcerative Colitis and their complications. For example:

Some of these markers are clinically available, and doctors are using them to measure disease activity and response to treatment. However, none of them are without shortcomings. Further use of them is needed to examine how effective they can be in patients.

Having had IBD for seven years now, I have had my fair share of blood tests over the years. I’ve been tested for all of the typical bloods mentioned above, as well as more specialist ones for my GYN and my Heptologist over the last couple of years. Whilst blood tests are always pleasant, I have gotten used to them somewhat. Blood taken in a outpaitent setting – i.e when I’m not admitted to hospital – has become easier over the years because I have become able to tell which veins are good for getting a decent amount of blood from. I’ve also learnt to get as hydrated as possible so that my veins do not fall or move whilst trying to poke me.

This is a different story whilst in hospital trying to get routine bloods when dehydrated or trying to get cannulas placed for infusions or fluids. But for these, I usually let them poke me several times as I know how important it is to get the cannula in. And whilst they hurt and have sometimes blown within minutes, I’ve just taken it to be part and parcel of my condition. Routine bloods for me happen every eight weeks, sometimes more if I have more appointments with my specialists outside of Gastroenterology.

How have you found your experience with blood tests for IBD? Any bad experiences? Do you have routine bloods drawn to keep everything in check or is it when a problem occurs?

Crohn’s and Colitis UK: Tests and Investigations for IBD

The What and Why: Faecal Calprotectin - The Poop Test