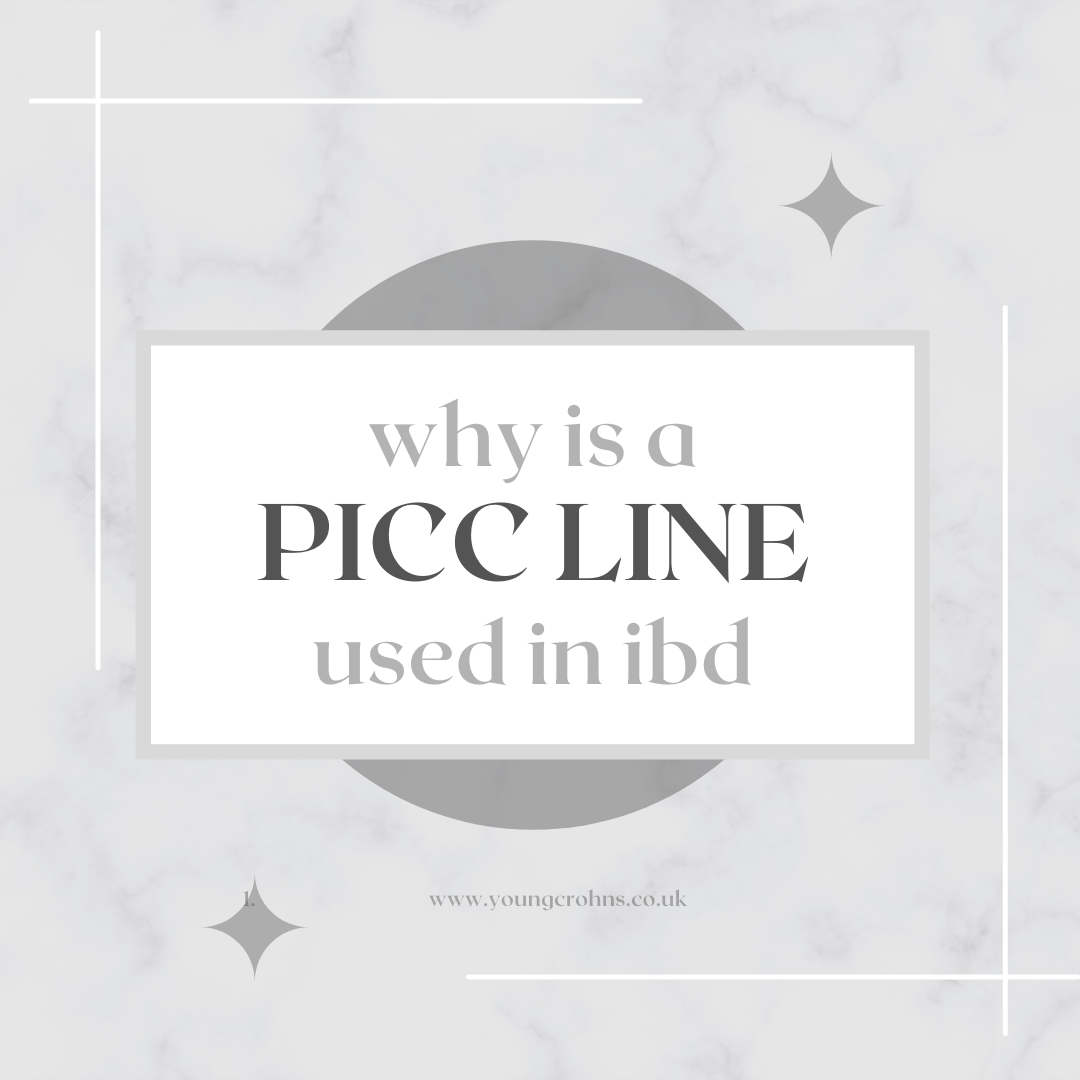 I’ve been on biologics for almost all of the time I’ve had Crohn’s Disease, which is a decade now. That is a lot of needles and IVs and as a result, my veins are troublesome. In recent years, Its become very difficult to get cannulated for infusions, surgeries and even draw blood.

This wasn’t going to be such an issue when I could switch my current medication – Vedolizumab – from IV to subcutaneous injections at home, but I’ve developed an adverse reaction and back to infusions I went.

As I can imagine, I was dreading getting an IV. It was always very painful – even though I’d become used to that part of it, it certainly wasn’t normal to be painful – and it was taking multiple attempts, even with the ultrasound and vein scanner to guide them to the best spot.

Discussions began to look at getting me permanent access – a line – placed to help aid this aspect of my treatment and care. The first option was a PICC Line. Below I’ll explain the process of what this particular line is, how it functions, its benefits and risks as well as aftercare. I’ll also explain what else, besides medication access, it can be used for, as well as why mine has failed and is now being changed.

What is a PICC Line and why are they used?

A PICC Line is a Peripherally Inserted Central Catheter. Peripher means ‘away from the centre’ which is why they are placed in the upper arm, peripheral from the centre.

So here is how a PICC line would look from an anatomy viewpoint – being placed on the inside of the upper arm within a vein that goes towards the Superior Vena Cava (SVC) directly next to the heart. And on the right is my own PICC line, placed on the inside of my dominant arm – to help reduce obstructions and blockages as I would be using this arm as ‘normal’ – in early January.

A PICC line can help someone:

All of these things can frequently come up within IBD Care, so PICC Lines are a regular tool to be used in some patients.

Why is a PICC Line used instead of a regular IV line?

A PICC line is thicker and more durable than a regular IV. It’s also much longer and goes farther into the vein. Health care providers use a PICC line instead of a regular IV line because:

What are the risks or possible complications of having a PICC line?

Although rare, the risks associated with the PICC line procedure can include infection, bleeding, blood clot, increased venous thrombosis, pulmonary embolus, breakage of instrumentation during the procedure.

Pain can be expected during the injection of the local anaesthetic and discomfort, or pain may occur related to table positioning during the procedure. Adherence of the catheter within the venous system at the time of removal can occur when the catheter has been in-dwelling for long periods, although this is a rare occurrence.

I had a couple of small issues with my PICC which became compounded over time. Until you have a line placed, you don’t know how your skin will react to being covered 24/7 or how comfortable / user friendly having a line is. From about the second week, I began having issues with my skin and on my weekly change appointments, my skin was breaking and weeping from the external line pressing into it under the dressing. It was incredibly itchy too and I was taking antihistamines to counteract the majority of the itch.

What to expect after a PICC procedure

Strenuous exercise should be done with caution to protect the PICC. The PICC should be flushed before and immediately after each use and flushing instructions must be followed carefully.

You will be given an information book with phone numbers to call in the event of a question or emergency related to the PICC. You should report any of the following to a nurse:

If a nurse is unavailable, call 111 for advice who will direct you to an urgent care department or A&E depending on the time of day.

PICC removal is a simple procedure in almost all cases.

Mine was done after my first infusion using the line, as we had confirmed keeping it in would be pointless while I waited for the portacath to be placed. It would also allow my skin to breathe and heal. The time between the PICC removal and my upcoming port insertion is about 5 weeks.

Things I now Love about Living with a Stoma