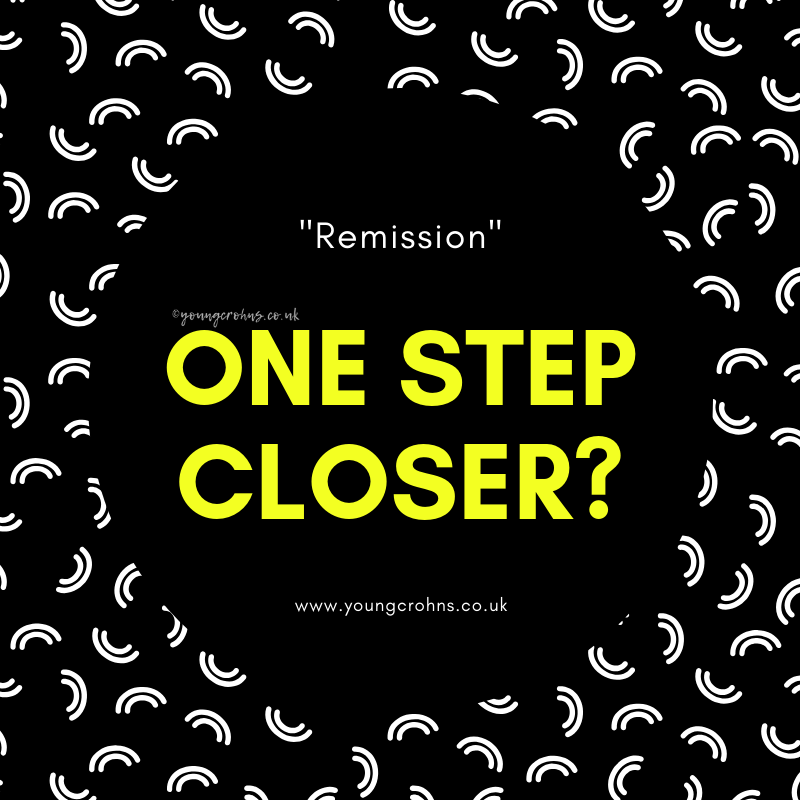 I have questions. So. Many Questions.

1. How do you determine if surgery has succeeded?

2. How do you measure ‘remission’?

3. Can you actually achieve it?

4. Do I want to be medication free?

I hope these all seem logical, or at least follow on from each other.

Maybe the additional, and probably first question should be Why am I asking these types of questions?

The period between Christmas and New Year was eventful for me. Not only did I catch some sort of stomach bug which really affected my ostomy – like it should do, really! – but I got good – no strike that, excellent – medical news.

I mentioned in my surgical review last month – read more here – that I was going to be having some tests run following our discussions regarding my inflammation levels. It’s one of the reasons why I am still under his care and why I haven’t been signed off to return to work yet. Tests involved some blood work and a faecal calprotein test before having an MRI done too.

Results of that calprotein test came back between Christmas and New Year from my IBD nurse, with the following:

“The result came back <20 indicating deep remission. I briefly mentioned this to [the consultant] but need to clarify … we may now consider stopping the Vedolizumab if you do not have any symptoms.”

I should be jumping for joy! Dancing about the place! Screaming from the rooftops! SURGERY WAS A SUCCESS!

But has it been?

Don’t get me wrong, I was living a nightmare before surgery. I knew I needed it and it would help tremendously. And it has, more than anyone could have predicted or expected. I’ve seen such a dramatic change and now an increased change in my body that I truly appreciate and adore. I don’t regret surgery for one second. But how do they know it has worked? Despite my physical appearance and the disappearance of my chronic pain from my IBD, how do they measure their success? Obviously, bloodwork and tests will now show that my body is fighting in the way it should be, it is performing how it should do now that my digestive system is changed. Surgery has not cured me of my IBD. THERE IS NO CURE FOR INFLAMMATORY BOWEL DISEASE. My levels of inflammation will be continued to be monitored to avoid another massive flare up.

Surgery was explained to me as “not a quick fix” nor would it work for every single patient. Luckily, I have walked away without many complications – such as sepsis, ileus, stoma prolapse or a hernia – and I seem to be coping well with being an ostomate. That is down to the great support I get from the ostomy community and my medical team. The medication I’ve been receiving – Vedolizumab; an infusion based in integrin therapy – does not have the same level of ‘drug testing’ as Inflixmab or Humira has. They can not yet test my blood for antibodies or the levels of reception it has within my system; it is just too new. So how can they possible say that I can come off my medication?

The goal here I believe, is to leave me with enough drug options to work with if I experience a uncontrollable flare up. It could happen and if its soon – i.e. in 2017 – I have Vedolizumab and the new Ustekinumab as options. In future years, hopefully more medicine will be available but it is likely that surgery has gotten rid of the worst of my IBD. Of course, being a patient who has both small bowel and colonic Crohn’s Disease; reoccurrence in my small bowel again is the next ‘step’. We need options open and available to fight that, if it come to it. So coming off the medication is best, if my body is okay without it. Time will tell.

Do I want to go down that road?

I had a brief period in 2013 when I was without medication due to joint problems after Humira ended, but that was short lived; if I recall it was 6 weeks or so? Not good. It seems my body needs medication to keep my Crohn’s Disease at bay. But without a colon – the main source of my problems since 2013 when two strictures developed and biological treatment was restarted in the form of Infliximab – maybe I am now able to live without medication. We don’t know for sure if coming away from Vedolizumab will be successful but we need to try. The signs of remission from the clinic perspective could mean that surgery has been ‘curative’ for me; in this instance. But again, we don’t know for sure until I am taken off it.

So I’m scared. I’m scared that I won’t be well without medication and I could get sicker. I’ve experienced “healthy peoples sickness” this Winter and it’s played absolutely havoc with my ostomy. It is more physical draining because I am now unable to forget about my ostomy, it needs changing and emptying. I can’t just push that “I need the toilet” feeling away like I could do before, when I used my butt. Plus, things seem to affect me more; quicker and harder than when I had my colon. So its all new challenges and changes I have to adapt to, which are harder when you’re ill. And after such a good recovery from surgery, it really sucks when I do get sick. It hits me mentally harder than before. Being sick now is something that is quite ‘foreign’ – its been a while since I’ve been sick and sick for days on end. I get more grumpy and frustrated than I would have done in the Summer.

Also, it means now redefining everything all over again.

I have an ostomy and I was sick.

I have an ostomy and I am sick.

Two very different sentences. Both of which I will need to adapt to.

Living with chronic illness is no picnic. It’s something that takes strength gathered from deep within, that you never ever thought you had. You get used it, the pulling of your strength and you do become some what proud. And you should be proud. You go through so much with a chronic illness – it’s  not called “chronic” for no reason! – there has to be a positive. You find them, in moments when you least expect them too.

I return to see my surgeon at the beginning of next month and hopefully followed up by my consultant soon after too. They should have all the results they need to make a decision and formulate a plan for my IBD care. Fingers crossed eh?

Link to “Going Medication Free – Is this the IBD dream?” is here

What Does Chronic Illness Rob You Of?