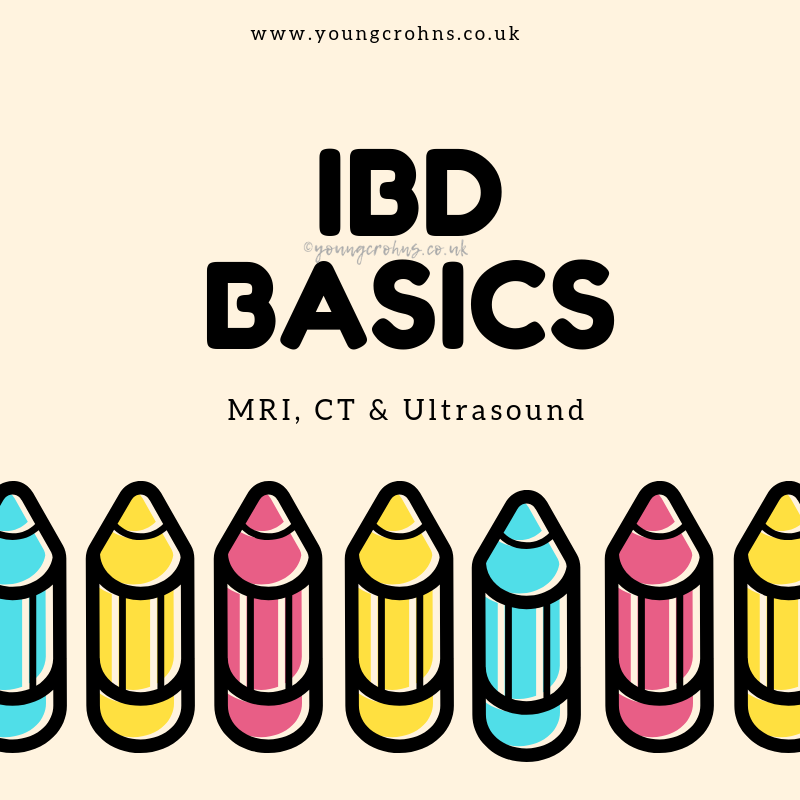 If you are looking for the entire ‘IBD Basics‘ series, you can find them all here.

What are MRI, CT and Ultrasound scans & why are they important?

To make a diagnosis of Crohn’s disease, your doctor will likely gather information from multiple sources. You’ll probably go through a combination of exams, lab tests, and imaging studies with these goals in mind:

With that in mind, imaging is widely used to not only diagnosis but manage Crohn’s disease.

MRI – The use of MRI to make a Crohn’s diagnosis is on the rise. This test gives your doctor a clear picture of the inside of your body, but it does not subject you to radiation.  MRI scans use strong magnetic fields and radio waves to create images of the inside of the body. The MRI scanner is a long tube or tunnel, and you will be asked to lie on a moveable table, which slides slowly inside this tunnel. This can be loud and noisy, as well as lasting between 15 minutes to over a hour, depending on the type of scan required.

CT – CT scanning uses computer-aided X-ray techniques to make more detailed images of the abdomen and pelvis than can be seen in traditional X-rays, but could subject you to radiation. . The scanner looks like a giant ring doughnut, and you lie on a moveable bed, which slowly passes through the centre. X-rays are taken at different angles, and the images put together to produce 2D or sometimes 3D views of the body.

Ultrasound – Ultrasound works by using high frequency sound waves to create an image. A handheld sensor is moved over the surface of the skin, and this sends out sound wave signals which bounce off internal organs. The scanner then picks up the echoes and converts them into an image. Ultrasound can show up thickening of the bowel wall, fistulas, abscesses and strictures.

How do they work and how are they used to treat IBD?

This particular type of scan works in a very detailed way. “Most of the human body is made up of water molecules, which consist of hydrogen and oxygen atoms. At the centre of each hydrogen atom is an even smaller particle, called a proton. Protons are like tiny magnets and are very sensitive to magnetic fields.

When you lie under the powerful scanner magnets, the protons in your body line up in the same direction, in the same way that a magnet can pull the needle of a compass.

MR enterography (MRE) is a special type of imaging that is performed with the addition of contrast material to produce better images. You will need to drink contrast material before the scan, and then during the scan a different type of contrast material will be injected into a vein in your arm. MRE improves the accuracy of diagnosis and allows good imaging of the entire thickness of the bowel wall.

Some people may have an Magnetic Resonance Cholangiopancreatography (MRCP), which provides detailed images of the liver, gall bladder, bile ducts, pancreas and pancreatic ducts. The technique can be used to diagnose Primary Sclerosing Cholangitis (PSC), a possible complication of IBD.

Before having the scan, you may be given a special dye called a contrast to help improve the quality of the images. This may be swallowed in the form of a drink, as an enema or injected into a blood vessel.

The scanner consists of a ring that rotates around a small section of your body as you pass through it. Unlike a MRI scan, the scanner doesn’t surround your whole body at once, so you shouldn’t feel claustrophobic. While each scan is taken, you’ll need to lie very still and breathe normally. This ensures that the scan images aren’t blurred. You may be asked to breathe in, breathe out, or hold your breath at certain points.The scan will usually take around 10-20 minutes.

CT scans can help find abscesses that might not show up on other X-rays.

CT scans can produce detailed images of many structures inside the body, including the internal organs, blood vessels and bones. They can be used to: diagnose conditions, guide further testing and treatments, as well as monitor conditions.

Ultrasound scans can also be used to examine the liver, kidneys and other organs in the tummy and pelvis, as well as other organs or tissues that can be assessed through the skin, such as muscles and joints.

A small handheld probe is placed onto your skin, and moved over the part of the body being examined. A lubricating gel is put onto your skin to allow the probe to move smoothly. This also ensures there is continuous contact between the probe and the skin. You should not feel anything other than the sensor and gel on your skin (which is often cold).

Ultrasound is used to help diagnose perianal Crohn’s disease as well as examine organs in the abdomen; such as liver and gallbladder. It may also be used to examine the small bowel for blockages.

NB: The type of scans you might have will vary depending on your symptoms and whether you have Crohn’s disease or ulcerative colitis.

As there is no one singular test to diagnose IBD, your team will consider all your symptoms; together with the results of endoscopies, biopsies, blood and stool tests, scans and X-rays. To reach a diagnosis often requires a team of specialists including gastroenterologists, pathologists and radiologists. It can take time to confirm a diagnosis of IBD as it may be necessary to rule out a number of other conditions beforehand.

It’s important to note that endoscopy shows the macroscopic appearance of the lining of the gut; Crohn’s can be identified by the presence of specific isolated areas of inflammation and UC by continuous areas of inflammation, with no gaps in between. The biopsies that are taken during endoscopy will be examined under the microscope for features that are distinctive of Crohn’s or UC.

Compared to scans and X-rays which generally show the location and extent of inflammation. This helps doctors to distinguish between Crohn’s  – which can affect any part of the digestive system from mouth to anus and UC – which affects only the large intestine. Cross-sectional imaging, such as CT and MRI, can show whether ulcers have spread through all layers of the bowel wall; as occurring in Crohn’s disease or affect just the inner layers, as typically seen in UC.

I’ve had many scans in the last seven years of having IBD. Sometimes these will happen all at once – usually during or closely following an admission – or routinely, so that my disease in well monitored.

For me, all of these scans have been painless as I’ve become used to them happening. All par one occasion of a small bowel MRI scan I’ve had no side effects or reactions to what has been requested. Of course, I’ve never electively wanted these procedures doing; and whilst its been, so far, an even spilt between them being to assess an acute flare up and to manage my condition periodically, not of them have been taken lightly.

Whilst ruling some things out and confirming suspicions, my scans have been a good and solid indication of where I am with my disease management as well as its progression. Scans like these are a solid indicator for a GI or any member of an IBD to track, monitor and trace disease progression and assessment of medications effectiveness to treat IBD. For me, a scan is reassuring because I know they will confirm or rule out particular things, which helps ease my anxiety or it helps us – my team and I – move forward with treatment plans and options.

I’ve had, so far, probably a dozen ultrasounds, almost two dozen MRI scans – both small bowel and MRCPs – as well as a half-dozen CT scans. And all of them have been important and required. So much so, that I’m well prepared for them, when I was without my stoma and now with.

I’ve written about them too! Here are the ‘collection’ of posts:

Are you due a IBD investigative test? Is this routine or new? Have you has this test before? Any bad experiences? Have you always had access to the results?

Crohns and Colitis UK – News: Can MRI scanning tell us the severity of gut damage?

A Practical Guide to Fatigue