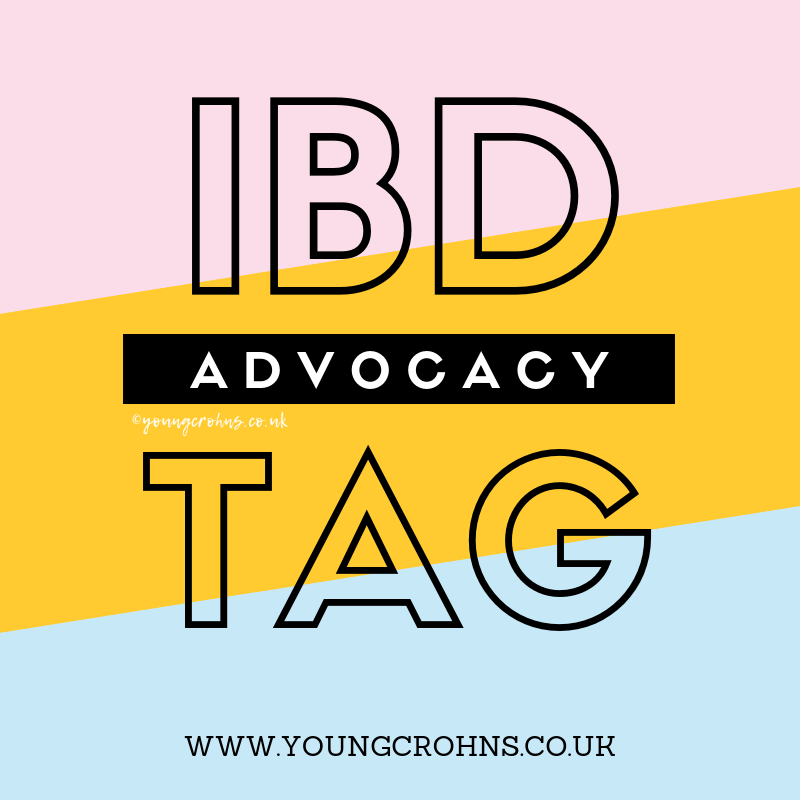 So, I was recently tagged by the lovely Thalia Skye in her vlog for the IBD Advocacy Tag. This has been a tag created by Megan over at Front Butter Youtuber – which you can watch here – helping to promote and raise the profile of IBD advocacy online. The premise is to answer the below five questions and tag five more fellow IBD-ers to continue this thread.

What form of IBD do you have?

I have Crohn’s disease. I was diagnosed with Crohn’s Colitis back in 2011 as my IBD was just located in my descending colon but has the histology of Crohn’s disease – that cobblestone appearance and being in multiple layers of my bowel lining. Since then, along side my treatment plans, my Crohn’s disease spread into my terminal ileum and into my small bowel; causing some strictures along the way.

I had a large stricture in my terminal ileum removed in May 2016 when medication failed to work effectively, and then a subtotal colectomy in August 2016 due to my disease reoccurring in all of my colon, rendering it useless. I now live with an ileostomy which will be made permanent this year, at some point.

Why is IBD advocacy important?

Everyone poops. But not many people like talking about it. Which makes talking about bowel conditions harder. My disease used to revolve around the bathroom and even now my disease is focused around my output from my stoma in to my bag. As my disease takes on new challenges, its important to make these things more normal, so those who suffer from IBD or any disease which isn’t ‘sexy’ or particular visible, we have a voice. Removing the stigma attached to invisible illnesses and from stoma bags is my reason for advocating: I speak about my experiences as someone who is chronically ill, who has a stoma and who is a patient.

As my illness takes control of my life, I take back some of that control by being a proactive patient, one who is willing to fight for what is needed and what is right and proper for not only myself – in the first instance – but for others who come after me. I share my experiences to lessen the negativity often felt.

Spending a considerably longer time in the bathroom than others – this would happen on a regular basis when I had my colon. It would happen at home, at work, out in public – when out for a meal with my family for instance – or just whenever I needed to go. Control, that was a big issue. Coming out long after anyone else, I was embarrassed and always wondered if anyone made comment or passed judgement on where I was or what I was up to.

Nowadays with a stoma it’s the farting. Yes, I still fart but into my bag and it happens at the most inappropriate times. But! I’ve learnt to just laugh at it. When it comes to my stoma, I have no control on what it does, so I just embrace it.

What is a common stigma you run into?

That I mustn’t be sick because I work / go outside / put make up on / laugh / don’t look unwell.

Most of the time, my disease creates problems that are only seen by my medical team because they are happening inside my body. My stoma and my stoma bag might be the most physical part of my disease these days but they do not mean I don’t have IBD anymore. If anything, it means sometimes I have to be more careful and considerate to my body. But, in reality, my stoma does not stop me from doing anything. I still work, I still eat plenty of food, I still have sex and I still do everything else anyone else would do. I still become fatigued, I still get bugs, I sometimes get blockages and I definitely get dehydrated but I have learnt to adapt. I just wish sometimes, people who ask questions and find out answers instead of assuming because I look well, that I am fine / cured / not that sick.

What do you want other people to know about IBD?

That its more common than you think. That early diagnosis and good treatment make a hell of a difference – not only in physical health but mental health too.

I’d really like people to be more willing / able to talk to someone who has it and learn about it. Like I said, we all poop. Only difference is now I poop out my belly.

I hereby tag – you can do it in video, blog, or social media post:

I also challenge any of you to participate in the #IBDAdvocacyTag in which ever medium you prefer to communicate in!

10 Tips for Feeling Comfortable with an Ostomy

Life Lately | "And Another Thing.."