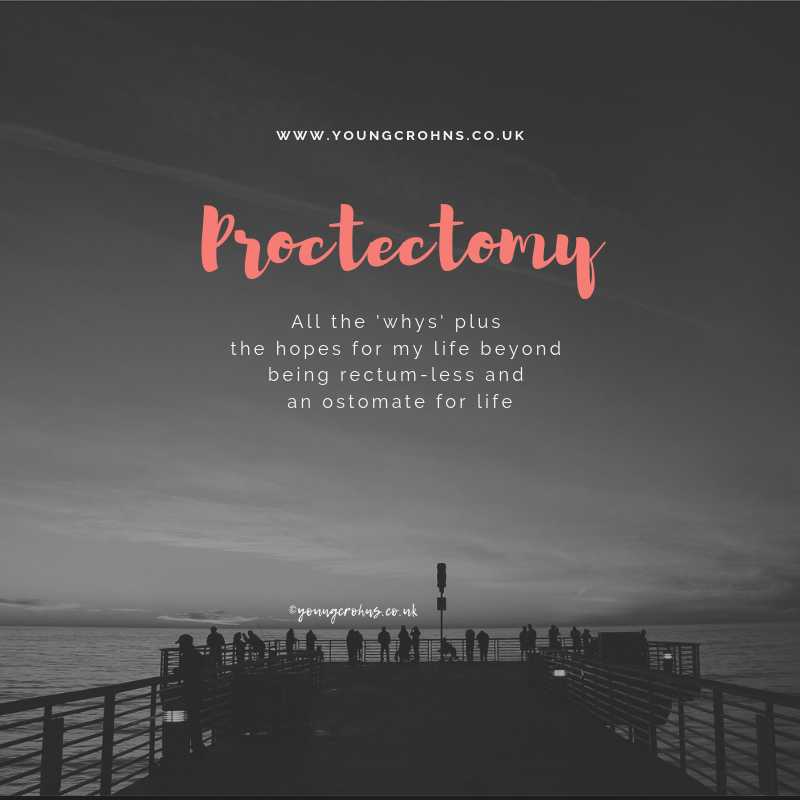 Background: In 2016 I underwent two operations for my Crohn’s Disease. The first was a Right Hemicolectomy in May, followed by a Subtotal Colectomy with Ileostomy in August. My first surgery was to remove a stricture that was causing all of my then IBD symptoms. It had been unresolved by medication, so a joint decision between myself, my consultant and surgeon was made to remove my terminal ileum and about 20 cm of my small bowel.

Between May and August I would be admitted  – post surgery – four times; I had a bowel infection, my Crohn’s reoccurred and we failed to treat it. I struggled alot during that time, more than I had done ever before in the 5 years I’d had my IBD. By August my colon was not functioning at all, it was ulcerated and bleeding beyond belief. It needed removing. This involved having a stoma. I graciously accepted this and life with my stoma has been really great. My surgeon purposely left my rectum and anal canal just in case I wanted to reconnect it at a later date. Control of my IBD was most important after the surgery – I went back on to Vedolizumab and felt really well, the best I had done in years. At a surgical follow up, about 3-4 months after the subtotal colectomy, my surgeon advised that despite my stoma being life saving, my IBD would and could still affect my small bowel. The creation of a J-Pouch would mean using this bowel, and the risk of creating a pouch that could pathologically have IBD in it, was too high to take. My options at this point were a) have an elective surgery to make my stoma permanent or b) wait until the stump flared up and / or caused a detrimental affect on my Quality of Life (QoL).

Last year I spent most of my time trying to control my intermittent flaring stump.

Between my IBD nurses, my GP and myself, I took steroids, enemas, foam enemas, steroid suppositories, more pain relief that I care to ever be on, and my mental health took a huge dip with all of this.

I constantly felt I was fighting a loosing battle.

I’ve fought my IBD before, many MANY times, and I’ve always known when I needed to stop and accept help. This time around, I knew it wasn’t as simple as this; trying to describe my pain to medical professionals was like hitting my head against a wall. I struggled to get support and I felt lost. Somewhat because this was new to me – I knew no-one who had gone through this; I mean, who else would be experiencing this on a daily basis and neglect to get it looked at and sorted? No-one talks about this, not anyone outside of the IBD community for that matter. So plodded on. I took pain relief after pain relief – because I was in pain and the localised treatments did very little to nothing – and I got lost. I was numb to my pain because I felt it all the time and just dealt with it by dosing myself up.

This also meant I had time off work, multiple times off work, in 2018. Not being able to work was hard – it still is hard – and I had to seek some mental health support to get me back on track. But in October, I had a frank and honest conversation with my IBD nurse and asked for a surgical opinion. I had done my dues; I’d taken and done everything I’d be asked off, I wanted this removed.

Of course, that has been the journey since January, when I met with my surgeon. He emphasised that removal of my rectum, anal canal and the small amount of my sigmoid left would effectively leave me with my stoma for the rest of my life. This was a one way street and we could not go back. I accepted. He also highlighted that while a Proctectomy would mean the end of my urgency and discharge issues, I could still experience pain in that area – phantom rectum was a topic of note, as well as how close this surgery would come to my pelvis. With that in mind, we have already got appointments and referrals for pain management, after the surgery as well as the Acute Pain team during my stay.

So, here is what has happened to me so far:

My Subtotal Colectomy operation removed my colon and left with a rectal stump: shown here, above.

Going into this Proctectomy, I have this, below. Here it shows the state of my digestive system – with my ileostomy on my right hand side, and my rectal stump – enlarged here for visual effect. Despite the stump being sown up and not connected to my small bowel, it still is ‘active’ for as long as it lives inside a body. This means, its cells still act the same, so it produces mucus. It can also bleed if the stump contains inflamed cells of my Crohn’s disease, which it has done from time to time. What I will be left with after this operation is this, below. This will be my anatomy for life. An End Ileostomy, which has no change from what I have now. My surgeon will not touch my stoma at all during my operation, it shall remain the same one I had created in August 2016. But the midline incision will be cut through once more; this Proctectomy needs to be done as an open surgery. Notes: Typically, this type of surgery happens to IBD patients who have Ulcerative Colitis as this inflammation is only seen in the colon. A Proctectomy for a UC patient would effectively ‘cure’ their UC as there has been a complete removal of the organ in which the inflammation resides in. For me, with Crohn’s Disease, I still have the ‘risk’ of Crohn’s being present in another part of my digestive system. This is already true; I have Small Bowel Crohn’s and have done since 2013. MY surgeries up to this point have been for disease control, and are part of a treatment plan along side treatment. I still have my Vedolizumab infusion to control my disease and will continue on this until it is deemed unnecessary.

What do I hope for being Rectum-less?

How do I feel about being a Ostomate for life?

It’s a weird one. I appreciate all that my stoma is to me – a giver of a new life, an ease of managing my poop, less IBD symptoms – but I also resent it. The sore skin, the constant hydration, the fact that I can’t always get a whole night of interrupted sleep, fear of leaks, it always being there. At times, having a stoma feels like having a small child who is constantly moaning or having a crappy second job. But it is what you make of it. The moments I have when I feel negative about my stoma – ranging from just feeling fed up or just frustrated  – they soon pass. I am able to see how much more a stoma has given me than taken away. It is a symbol of strength and ongoing reliance to a disease that continues to keep me on my toes from time to time.

Not having my rectum, not being able to change my stoma back; that is tough. And I am sure the swirl of emotions I am having – sometimes catching me off guard, mostly a link away from my train of thought – do get easier. But I am fully expecting some hard times before the ease of acceptance.

How To Prepare for Surgery

What's in my Hospital Bag?