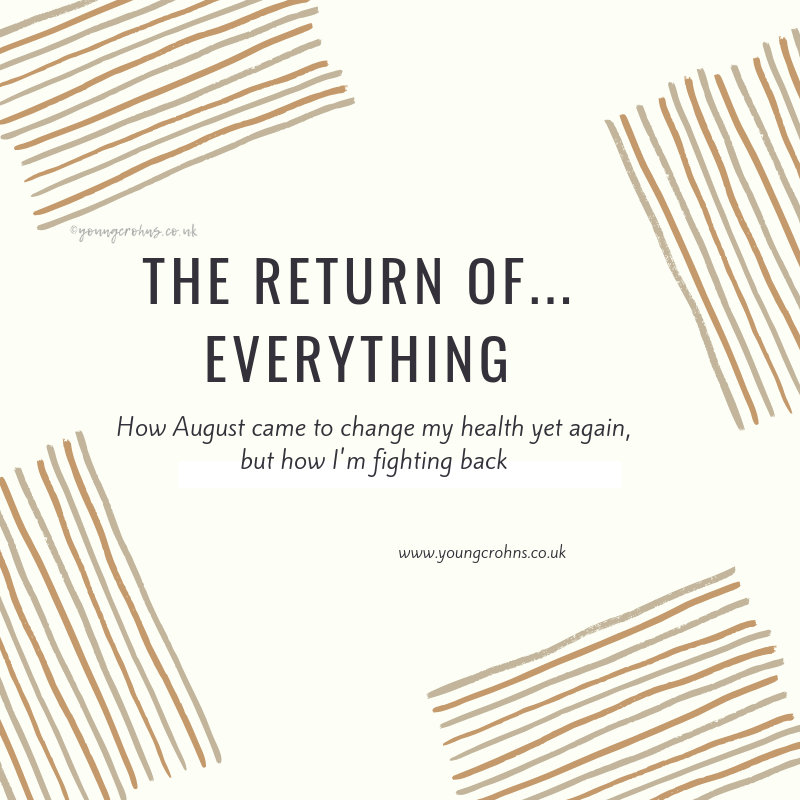 You always want to believe your consultant when they say “maybe we’ll be able to go a couple of years without any medications or big issues“. You believe because that is the sort of IBD dream isn’t it; managing without medical intervention? It was for me, back in June at my last appointment; full of confused optimism.

Fast forward not even six weeks and I was bed bound, in constant abdominal pain; unsure of what was happening to me. I would suffer for weeks, spending days on end in and out of the hospital, not really getting any answers or making any progress on the pain relief front.

I was filled with dread and the fear of not wanting to find out what was actually wrong.

I remember sitting in a work meeting about IBD and hearing the statement: “stress usually triggers off an IBD event, taking up to 3 months to come out in the digestive system”. I guffawed, thinking it to be nonsense. My flare ups came suddenly and swiftly, I surely would notice them!?

I sat in Peterborough City Hospital, hearing the results from some tests coming back as “probable IBD flare up” – Where did this come from?! How had this happened? I was living a good life, how could I be in a flare up?! I cursed my consultant for leaving me med free, I cursed my relocating for a new job, my new lifestyle; I cursed myself for being so carefree and happy. I should have been abit  more cautious. Shoulda woulda coulda.

The gift and the curse of being between two hospitals means you have to coordinate.

I might have two sets of IBD nurses and two sets of IBD medical teams, but getting them to communicate can be a challenge. In the middle of August, I came home to the Midlands and got admitted to my old hospital, Good Hope. I have six years of IBD patient experience here, compared to my mere weeks at Peterborough City. I know the layout, the process, the NHS Trust and the teams involved in my care. I have a strong, personal and professional relationship with not only my two IBD nurses but also my consultant, my colorectal surgeon and the specialist ward. Their straight-shooting nature meant that previous testing from Peterborough was released over to them, and we were able to start moving forward with my care. Simply put; I was in a huge IBD flare up – symptomatic with physical and mechanical bowel obstructions – and needed to return to my biological medication I had stopped at the start of 2017. I was beyond gutted.

I was also scared.

I was feeling many things and the one thing that kept striking me in the chest was the feeling of defeat.

The utter helplessness I felt was crushing my spirit. I am usually so resilient and resourceful; taking stock of my circumstances and pick myself back up. But almost a month of being in and out of two different hospitals; witnessing some horrible things, enduring many sleepless nights, let alone all the loneliness; was taking its toll. I had no fight. I just didn’t want to be in pain anymore. And considering all that I had been through in 2016, this was nothing compared to that; I felt ashamed that I was letting this current situation take so much away from me. I was angry. And I could not find words, I could not get out of my head. I had to keep on fighting, even if it was draining me even more than I could bear.

Close to the end of August, I was admitted again to Good Hope; this time with some sort of fight. I was at my wit’s end. I needed help. I’d been off work for a month, with no plan to go back. Despite knowing I was in a flare up, I was still without medication, without any adequate pain relief, without a plan, it was making me angry. Then the sickness started and it did not stop. Obstruction got said, closely followed by possible surgery. In came my surgeon, forcefully taking control; ordering an NG tube, some Gastrograffin and a plan to resolve this blockage soon. Several failed attempts at the tube later and after one large solution of aniseed flavoured Gastrograffin, we were working on the blockage. The sickness, however, continued throughout the next 72 hours, I was dangerous dehydrated and a PICC line was being planned.

This spurred everyone on. PICC line was serious stuff. It made me take stock and wake the fuck up.

The first feeling of your stoma working and your ostomy bag filling up with output after almost four days of no activity is not only a weird and unusual feeling – I don’t think I’ll ever really get used to my bag filling with stool – but it is wonderful. I probably had the biggest smile on my face when my nurse came to check my bag; she then prompty scrubbed “water only” off my board and replaced it with “light diet“. Six days with no solid food passing my mouth had made me not only cranky but also once more eternally grateful for my utter love of food.

Despite the frantic need to coordinate my care between Good Hope and Peterborough City Hospitals, we did get my Vedolizumab restarted within 48 hours of submitting paperwork to the CCG  for my case. The wonder of the NHS never ceases to amaze me and I am always going to be thankful for their dedicate to my IBD. It is not a complicated case but it is complex.

So where are we now, just over two months since this saga began?

My summer, in numbers: We are now two weeks deep into an eight week course of steroids and one week into a nightly routine of pain relief. And things seem to have settled down a great deal. Some of that is probably due to the Vedolizumab doing some good – albeit slowly as it can take up to fourteen weeks to properly response to – but I am now able to not depend thoroughly on pain relief to get me through the days. I feel some normality returning to my bones, some of my personality coming back. Some of my fight, a strong part of my need to write, seeping out of my fingers.

"It is okay to be angry at your situation sometimes"