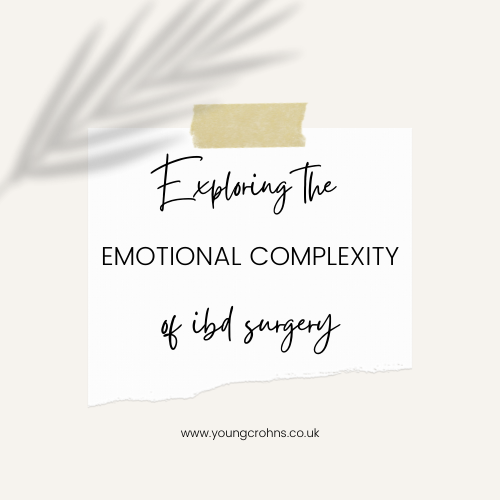 As I come to the five year anniversary of my first IBD surgery, what exactly can I share with you, that isn’t already out there? What can I tell you that does ‘justice’ to the process, to the hard work that goes on behind the scenes? What can I tell you as a patient and as a person who has had the same amount of time with surgery as without it in my IBD journey?

Let me tell you a story…

When I was told I had IBD, I panicked. Not because of the chronic nature of it but because I immediately thought I would need surgery. It was a couple of days later when my IBD nurse came to the ward and reassured me that surgery would be the last resort. This fact made me feel better almost instantly and I go on with ‘accepting’ the first stage of having IBD – finding a medication that would help me best.

I would spend the next almost five years trialling medications to get the right fit for my brand of Crohn’s disease. Yes, brand. I will use ‘brand’ here to encompass how my own individual Crohn’s disease affects me. I’ve become a big believer in this concept, as it allows me to explain my own medical decisions without saying ‘this is how it should be done and no other way’.

My journey towards surgery was a long wind up. It was failing Infliximab and then stretching it out until Vedolizuamb was approved for use on the NHS. It was then seeing no response to this that we tried alternative avenues – a second opinion and a surgical consult. As we know, I chose surgery. And despite what happened, I don’t regret that.

As the build-up to my surgery was a long one, I had time to really think about it. To be honest, I worried alot. It was my first time and I was scared. I was nervous as hell too, the thought of someone knocking me unconscious, slicing me open and removing part of my internal organs… was too much some days. Yes, I know dramatic, but this is reality. We all have little queries and qualms about things, mine was about surgery.

I found myself worrying even more after the surgery came and went. Immediate post-op was tough and it never really let up once I got home. I was always hopeful and expectant of my recovery to pick up, but it didn’t. I got addicted to painkillers because I was – surprise, surprise – still in pain. And no one could definitively figure out why.

Those three months of what I call the ‘ Summer of Hell’ did nothing to help me believe that surgery was a great fixer. Maybe five years of building up what surgery could and would do for me was bad. Maybe, I don’t know. At the end of a long summer of hospital admissions, tests and pain, I was back in surgery losing my colon and having my ileostomy placed.

I learnt alot about myself and my body during that period of time. I saw alot of immediate change and change for the better. I came off medication, I went back to work and I moved. But within six months of that, I was back in the hospital, unwell again.

Here is something I wrote in the midst of a bad couple of weeks in November 2017:

Surgery – it is not easy.

Anyone who tells you that surgery is easy is lying.

Anyone who tells you that managing a stoma is easy is lying.

Anyone who tells you that living with IBD is simple is evil and cruel.

Any [medical professional] who tells you that you need to have surgery, without trying medication first, is arrogant. Surgery is not a quick fix. It is not always simple and straight forward; it can be a very long recovery with many possible post-op problems and experiences to go through, most of which they will not explain to you beforehand. They don’t want to scare you out of surgery, but it’s not the full picture.

Anyone who wants to give you advice about your medical care without having your condition, or going through the same experience is not a good person. This is a talk for you to have with your medical team. It is a conversation to revisit a couple of times, so both sides are clear on the outcomes or goals of treatments.

Hear the anger in my voice! Hear the frustration and blame being put down on paper.

I learnt alot from my ‘outburst’. I learnt that:

But now to two questions:

What are the complexities of having IBD surgery beyond the physical changes?

Having surgery gives you one more thing to consider.

For me, it’s been a struggle to determine if it’s surgery related or IBD related.

Before surgery, knowing what was bothering me was simpler – my abdomen hurt, it was part of my small or large bowel giving me issue. I would rest, drink fluids and return to a soft and bland diet.

Since surgery, it’s more of a complex thing. You do become more in tune with it as time goes on, but when my abdomen hurts now, I need to get more specific – Could it be adhesions? Could it be a twist in the bowel? Could it be a partial blockage (although, this and a full blockage come with alot more symptoms to be aware of, read more here)? Could it be inflammation? What do I explain to my team? What details are important?

My flare-ups now are different too. Especially since stoma surgery and since proctectomy – Barbie Butt – surgery. I’ve become better at identifying what and where the pain is coming from and what the likely explanation is. Some things I can solve myself – rehydrate, trying liquid food, massage my abdomen, apply heat and go for walks all help me out – but others like acute pain, persistent pain and ongoing issues with my output are not for me to fix.

But emotionally, having surgery has strengthened me but also made the highs and lows of my depression and anxiety worse. I experience high highs and low lows. They are treated with medication and journaling. And while this might not be the case for everyone, I’ve found that surgery has given me more to fight for. I think more about myself in a positive way than I ever did before surgery, and I think that’s down to the fact that I understand myself better. That I appreciate what I am given because it doesn’t always last, especially good health.

It has certainly gotten better over time.

Probably because I’ve had more than one surgery and all of mine have been quite close together – without a year of surgery since 2016 – but I’ve had better conversations – more honest and real – with surgeons than my consultants. Maybe because they go in and fix something, and want to see a tangible result afterwards, compared to the long term management of my condition by my consultants, but surgeons have skills beyond their ability to use a scalpel. I find them kinder than I expected. I find them more compassionate than I expected. I’m glad of this change, from the ‘god-like complexes’ we have all heard about from surgeons gone by.

But still, I believe that proactive surgery with particular patients can work. Surgery recovery is tough and that requires alot of energy, dedication and health to do. Being very sick can complicate that. Being in the ‘best shape you can be in’ definitely rings true here.

If you enjoyed this post check out How to Prepare for Surgery and Post Operative Blues: The Emotional Highs and Lows after Discharge from Hospital

Life Lately | What Exactly is Going On?