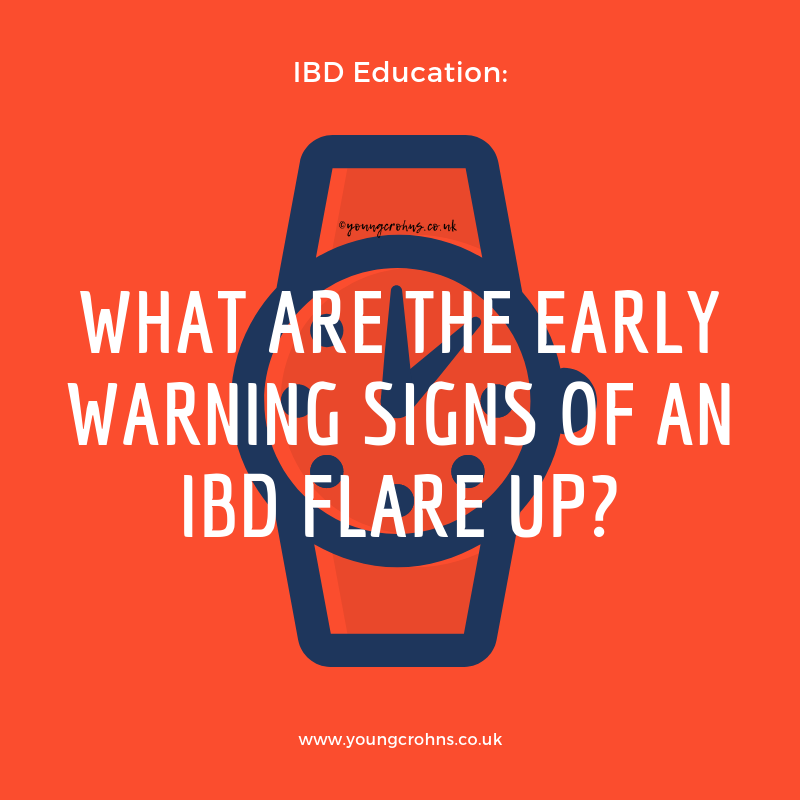 Most of the time the cause of a Crohn’s flare is unknown.

But the most common causes of flares include:

Below is the scale of symptoms and how to seek the most appropriate help when you experience these. Please note: You might have one or multiple symptoms at one time. You may also experience some of these more acutely than others. What is important is ‘does this feel different to my own normal’?

Moderate symptoms that would require contact GP or IBD nurses:

Ileocolitis – Affects the end of the small intestine (the ileum) and the large intestine (the colon). Symptoms include weight loss, diarrhea and cramping or pain in the middle or right lower abdomen.

Ileitis – Affects the ileum. Symptoms include weight loss, diarrhoea and cramping or pain in the middle or right lower abdomen.

Jejunoileitis – Characterised by patchy areas of inflammation in the upper half of the small intestine (the jejunum). Symptoms include mild to strong abdominal pain and cramps following meals, as well as diarrhoea.

Gastroduodenal Crohn’s disease – Affects the stomach and the beginning of the small intestine (the duodenum). Symptoms include loss of appetite, weight loss, nausea, and vomiting.

Ulcerative Proctitis – Affects the rectum. Symptoms include rectal bleeding, rectal pain, and a feeling of urgency.

Proctosigmoiditis – Affects the rectum and sigmoid colon (the lower segment of the colon right above the rectum). Symptoms include bloody diarrhoea, pain in the lower left side of the abdomen, and a constant feeling of the need to pass stools (tenesmus).

Left-Sided Colitis – Affects the rectum and extends as far as a bend in the colon near the spleen. Symptoms include bloody diarrhoea, pain in the left side of the abdomen, loss of appetite, and weight loss.

How can you ‘self manage’ your IBD?

The typical symptoms of IBD — stomach cramps, abdominal pain, and diarrhoea  — come and go. Keep in mind that the duration of flare-ups can be unpredictable and that remissions can vary in length, which means you always need to be on alert for any new or different symptoms.

A flare can last several days and go away on its own. Or you can have a flare that gets progressively worse and requires surgery. This is because each flare can produce an injury to the bowel, and frequent untreated flare ups can trigger complications like intestinal obstruction, as well as systemic problems such as anemia, bone loss, or clotting issues.

Preventing flares before they occur with an effective medical maintenance regimen can change the path of your IBD. As soon as you suspect a flare is occurring, it’s important that you take steps to control it.

How you can help:

Are there any exceptions to the ‘rules’?

If you notice more than six bowel movements per day that include a lot of blood, accompanied by a fast heart rate and a fever or a low temperature seek immediate medication attention.

In UC, Toxic Megacolon is a potentially life-threatening complication.

This is where a portion of the large intestine becomes paralysed, stops working, and swells to many times its normal size. This is an urgent condition that requires immediate medical attention. If left untreated, a portion of the intestine could be so severely damaged that it develops a hole or perforates, possibly leading to severe infection and even death.

Signs of toxic megacolon include:

In CD, three things are a major cause for concern:

Intestinal Obstruction – The most common complication of CD, obstruction may arise from swelling and the formation of scar tissue. The result is thickening of the bowel wall and a narrowed intestinal passage. These narrowed areas are called strictures. Strictures may be mild or severe, depending on how much they obstruct the passage of the bowel’s contents.

Symptoms of intestinal obstruction include:

Medications may relieve the obstruction by reducing the local area of inflammation. If the obstruction is severe and does not respond to medical treatment, surgery may be required. Surgery also may be indicated if the blockage recurs frequently.

Abscesses – An abscess is a localised pocket of pus caused by infection from bacteria. More common in Crohn’s than in Colitis, an abscess may form in the intestinal wall—sometimes causing it to bulge out. Visible abscesses, such as those around the anus, look like boils and treatment often involves lancing.

Symptoms of an abscess include

Once the abscess is drained, the symptoms resolve. Antibiotics are usually given to clear up the remaining infection.

Fistulas – Deep sores or ulcers within the intestinal tract may turn into tracts—called fistulas—that connect different parts of the intestine. Fistulas also may tunnel into the surrounding tissues of the bladder, vagina, or skin. These abnormal passages, which affect about 30% of people with Crohn’s disease, often become infected. If the fistula is small, antibiotics and other medical treatment may be adequate. Large or multiple fistulas, on the other hand, may require surgery, especially if they cause persistent symptoms.

Symptoms of a fistula include:

It is important to know that despite all these warnings, the body can just flare up without rhyme or reason. If you are ‘careful’ and maintain a good diet and healthy wellbeing whilst your disease is stable, having a flare up can come as a surprise. It also comes with a lot of emotions including anxiety and worry. These are normal things to feel and in no way should you feel guilty.

What is important is keeping in contact with your IBD team. Maintain your regular check ups with them within a clinic setting and make use of your IBD nurses, if you have one. Whilst this is something that is dealt with a NHS Trust level, Crohn’s & Colitis UK have a dedicated section of their website for IBD Nurse Specialist – locate a local nurse, how the system of contact them works and what to do outside of consulting times.

They have also created the IBD Standards which NICE have set out guidelines for how IBD should be diagnosed, managed and treated; with both surgery and medication. It is a document which has been greatly praised and well received.

How do you manage your flare ups when they occur? Do you track habits, patterns or symptoms to avoid future flare ups? Have you had flares that change your disease progression – ie needing surgery or changing treatment plans?

VeryWellHealth – Signs Your IBD May Be Flaring

Crohns and Colitis UK – What are the symptoms?

Everyday Health – Is it a Crohn’s Flare? How to Spot the Signs

Healthline – How to Know if Your Crohn’s is Advancing