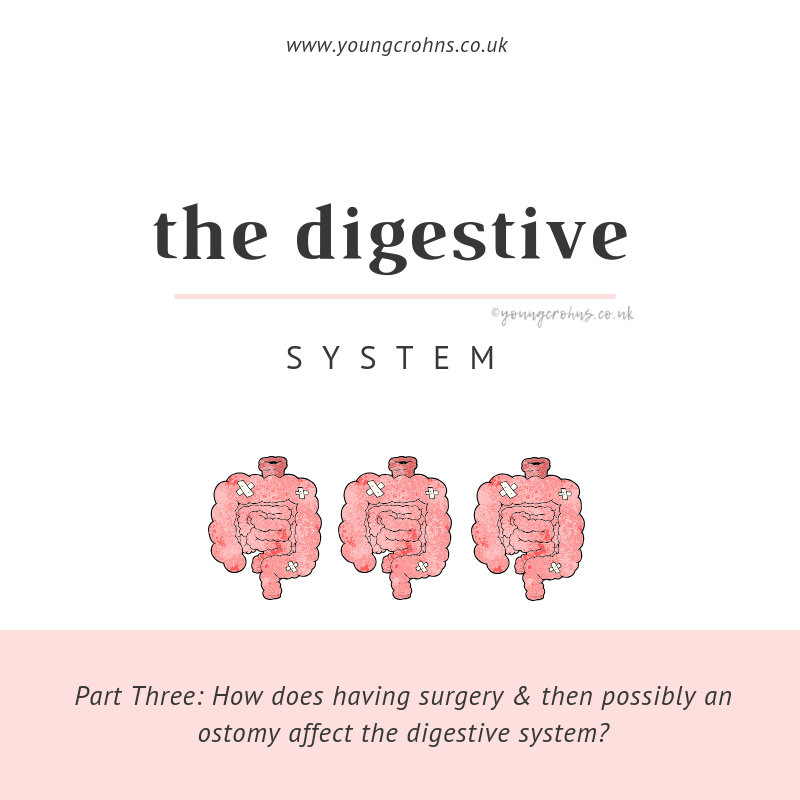 How does having surgery affect the Digestive System?

Depending on the location of your IBD and the amount of inflammation that needs operating on, there are several options of bowel surgery. Most will be a resection of what is deemed to be too extensive to be helped my medical therapy. From these resections, there is an alternation to the natural or ‘normal’ digestive system. Some of these resections will require an ostomy being created.

The most common operations for Crohn’s disease include:

The most common operations for UC include:

For the first 6 to 8 weeks after bowel surgery, it may be recommended to follow a low-fibre diet to give the bowel time to heal. This should be provided in the post-operative period and be followed up in clinic or with a specialist dietician. There should be a gradual introduction of fibre into the diet, as high-fibre foods may cause blockage. Most people are eventually able to resume their regular diet and eat what they like. However, various foods may affect the GI tract differently.

How is the act of digestion affected by having less bowel?

Short Bowel Syndrome (SBS) – this  is a group of problems related to poor absorption of nutrients. Short bowel syndrome typically occurs in people who have:

Short bowel syndrome may be mild, moderate, or severe, depending on how well the small intestine is working. People with short bowel syndrome cannot absorb enough water, vitamins, minerals, protein, fat, calories, and other nutrients from food.

Drug & Nutritional Absorption – Many drugs are incompletely absorbed by patients with a short bowel and may need to be prescribed in much higher doses than usual or may need to be given intravenously.

Several factors can alter the absorption of drugs taken by mouth in patients with a compromised digestive system. The most important factors are the length of intestine available for drug absorption, and which section has been removed. The small intestine, with its large surface area and high blood flow, is the most important site of drug absorption. The larger the amount of the small intestine that has been removed, the higher the possibility that drug absorption will be affected. Other factors, such as gastric emptying and gastric transit time, also affect drug handling.

Enteric-coated and modified-release preparations are unsuitable for use in patients with short bowel syndrome, particularly in patients with an ileostomy, as there may not be sufficient release of the active ingredient. Dosage forms with quick dissolution (soluble tablets) should be used. Uncoated tablets and liquid formulations may also be suitable.

How does having an Ostomy affect the Digestive System?

How does an ostomy function?

An ostomy is created during surgery to the bowel; specifically, to the small intestine or colon. It is created by bringing the end of the intestine through an opening in the abdomen and attaching it to the skin to create an opening outside the body. A stoma may be three-fourths of an inch to a little less than 2 inches wide and is usually located in the lower part of the abdomen.

A person may need ostomy surgery if they have:

When the entire colon is removed, an ileostomy is created

An ileostomy is a surgically created with the ileum (terminal part of the small intestine) being slightly pulled out of the hole in the abdomen in order to divert stool. The stoma of the ileostomy can be an end ileostomy or a loop ileostomy.

Generally, an ileostomy is created when the colon and/or part of the small intestine is removed. Ileostomies are also sometimes for a temporary period of time, to allow part of the intestines to heal or rest.

When only part of the colon is removed, a colostomy is created

A colostomy is generally created when part of the colon is removed. Colostomies are also sometimes created temporarily while allowing part of the intestines to heal or rest.

How does an ostomy replace the rectum?

NB: For those with temporary stomas, this will not apply as they will still have their rectum.

Having no rectum means there is no reservoir for your faecal matter to collect into. If you have been left with your rectum, this might be because a) you are able to have reversal in the future or b) were deemed to too unwell at the point of the surgery to have everything removed. This means, you are left with options and your stoma is technically ‘temporary’ in the eyes of a surgeon.

For anyone with a colostomy or ileostomy, your rectum is now technically your stoma bag. Your stoma will have no nerve endings, you won’t feel the output coming into the pouch until it is time to empty. But having your rectum still intact can caught some issues for patients; including and not limited to, discharge, bleeding, pain, urgency and IBD symptoms. And whilst the removal of the rectum and the anal canal can go a long way to resolving these issues, a proctectomy is a final and serious surgery to consider. You can still have pain issues and could be plagued by Phantom Rectum – the feeling of needing to have a bowel movement even though the rectum is not present. Phantom rectum is relatively common, the symptoms are usually mild and often go away without treatment. However, for some people, phantom rectum may occur for years after a surgeon removes the rectum. Some people with phantom rectum may feel pain, this can be treated with medications such as pain relievers and sometimes antidepressants.

How is the act of digestion affected by having a bag?

For the first 6 to 8 weeks after bowel surgery, it will be recommended to follow a low-fibre diet to give the bowel time to heal. This should be provided in the post-operative period and be followed up in clinic or with a specialist dietician. There should be a gradual introduction of fibre into the diet, as high-fibre foods may cause blockage to the ostomy.

Most people are eventually able to resume their regular diet and eat what they like. However, various foods may affect the GI tract differently. Just as before ostomy surgery, certain foods are more likely to cause gas, diarrhoea, constipation, or incomplete digestion. Introducing foods slowly and carefully, will help you see which particular foods are more troublesome than others. It takes time for the stoma to settle after surgery and for your digestive system to catch up too.

These symptoms require medical care and should contact their local services. For those who have had their colon removed should talk with a dietitian about diets that help maintain electrolyte balance.

Vitamin B12 Deficiency – Ostomy surgery of the bowel may affect vitamin B12 absorption from food and result in a gradual drop in vitamin B12 levels in the body. Low levels of vitamin B12 can affect the body’s ability to use nutrients and may cause anaemia. Your GP or specialist medical team can treat vitamin B12 deficiency with supplements.

Next time… the focus is digestion myths & misconceptions about ostomies