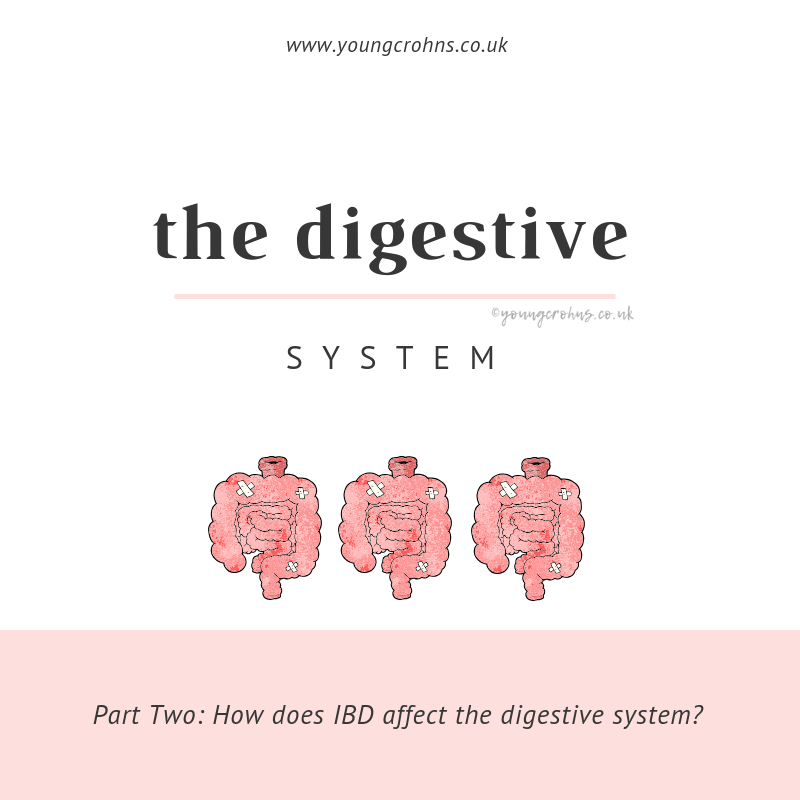 How does having IBD effect the Digestive System?

Firstly, what is IBD?

The signs and symptoms of Crohn’s disease and ulcerative colitis can be very similar, including stomach pain, diarrhoea, suddenly needing to use the toilet, tiredness, weight loss and loss of appetite. Some people may have a fever, mouth ulcers, nausea and vomiting. People with Crohn’s disease may also have pain or swelling around the anus, whereas people with ulcerative colitis may also have blood and mucous in their diarrhoea.

Not everyone will experience all of these symptoms, and they may come and go over time. There may be times when a person’s symptoms are at their most severe, called flare-ups, and other times when they have very few or no symptoms at all, called remission.

NB: It is important to note that IBD does not just affect the digestive system – it has extra intestinal manifestations and does not always present with bowel changes at first.

You may have heard of IBS – Irritable Bowel Syndrome – and wondered if it is the same as IBD. While often confused because their names are similar and their symptoms can seem comparable, the two are not the same. Yes, both diseases affect the digestive tract. However, with inflammatory bowel disease, inflammation is the key characteristic.

IBS is a common disorder that affects your colon. It commonly causes cramping, abdominal pain, bloating gas, diarrhoea and constipation. Despite these uncomfortable signs and symptoms, IBS does not cause permanent damage to your colon.

Most people with IBS find that symptoms improve as they learn to control their condition. Only a small number of people with irritable bowel syndrome have disabling signs and symptoms.

Fortunately, unlike more-serious intestinal diseases such as ulcerative colitis and Crohn’s disease, irritable bowel syndrome doesn’t cause inflammation or changes in bowel tissue or increase your risk of colorectal cancer.

What goes ‘wrong’ with your digestive system when you have IBD?

Inflammation is a normal part of the body’s self-defence system (called the immune system). In a person with IBD, it’s thought that the immune system overreacts to certain things and attacks healthy digestive tract tissue, causing inflammation.

Area Affected: Ulcerative colitis only involves the colon and always begins at the anus, with the disease continuously progressing upward. In some cases, it can involve the entire large intestine. In ulcerative proctitis, a milder form of ulcerative colitis, inflammation reaches up from the anus no more than about 20 cm or approx. 7-8inches.

In Crohn’s disease, the inflammation can be in multiple patches or one large patch. A patch of inflammation may be small, only a few centimetres across, or extend quite a distance along part of the gut. Whilst Crohn’s may involve any area throughout the entire digestive tract, it often affects the last part of the small intestine – the terminal ileum.

Extent of Inflammation: In ulcerative colitis, inflammation only involves the inner mucosa, while in Crohn’s disease, inflammation can extend right through the entire thickness of the bowel wall, from the mucosa, through the muscle, and can even include the thin outermost layer of digestive tract cells (serosa). This deeper inflammation can cause abscesses and fistulas; abnormal tracts or passages between organs such as between two sections of bowel, or the bowel and skin.

The inflammatory process causes dilation of blood vessels with increased warmth, oozing of fluid into the tissue, infiltration with inflammatory cells, and ulceration of the mucosa.

Below how’s the differences between normal bowel and that of those with IBD – as diagram (top), microscopically (middle) and endoscopically (bottom).

This inflammation can result from infectious agents such as bacteria, fungi, parasites, or even viruses. It can also arise from a chemical exposure, burn, trauma, or a number of other causes. The cause of IBD is undetermined but there is considerable research evidence to suggest that interactions between environmental factors, intestinal bacteria, immune dysregulation, and genetic predisposition are responsible. There is an increased risk for those who have a family member with the condition.

The ulceration and inflammation caused by IBD affects the body’s ability to digest food, absorb nutrients and eliminate waste, in a healthy way.

The most common symptom of IBD is diarrhoea. Inflammation can affect transit time, usually causing food to pass more quickly and allowing less time for water absorption, resulting in watery stool. Crohn’s disease can affect the small intestine and, in doing so, it may prevent the proper absorption of food, also resulting in diarrhoea and the increased elimination of fat (steatorrhea) and other nutrients.

In Ulcerative Colitis and Crohn’s disease of the colon, the normal colon function of removing fluid from its contents is impaired, resulting in frequent, liquid stools. Since the lining of the colon may be ulcerated, the diarrhoea often contains blood. In the severe cases, the colon can narrow and shorten, impairing water absorption further, leading to urgency of bowel movements and poor control of elimination function. Constipation can also develop, as the body struggles to maintain normal bowel function.

IBD patients can experience tenesmus, which is the feeling of incomplete defecation, as well as a sudden, short, severe type of pain at the opening of the rectum.

Abdominal pain is another common symptom. Like muscles elsewhere in the body, the muscular coat of the intestine is subject to spasm; inflamed intestines are irritable and more likely to spasm, which in turn applies pressure upon the extensive nerve endings in the bowel wall. This explains some types of pain in IBD, particularly cramping. In Crohn’s disease, pressure can build up behind a narrowed portion (stricture) of the intestine and produce pain.

Fever frequently accompanies inflammation of any type and is present in IBD.

Next time… the focus is around how the digestion system functions when you’ve had bowel surgery and when you have an ostomy.

IBD Clinic, University of Alberta – What is IBD?  –   Clinical Presentation of IBD