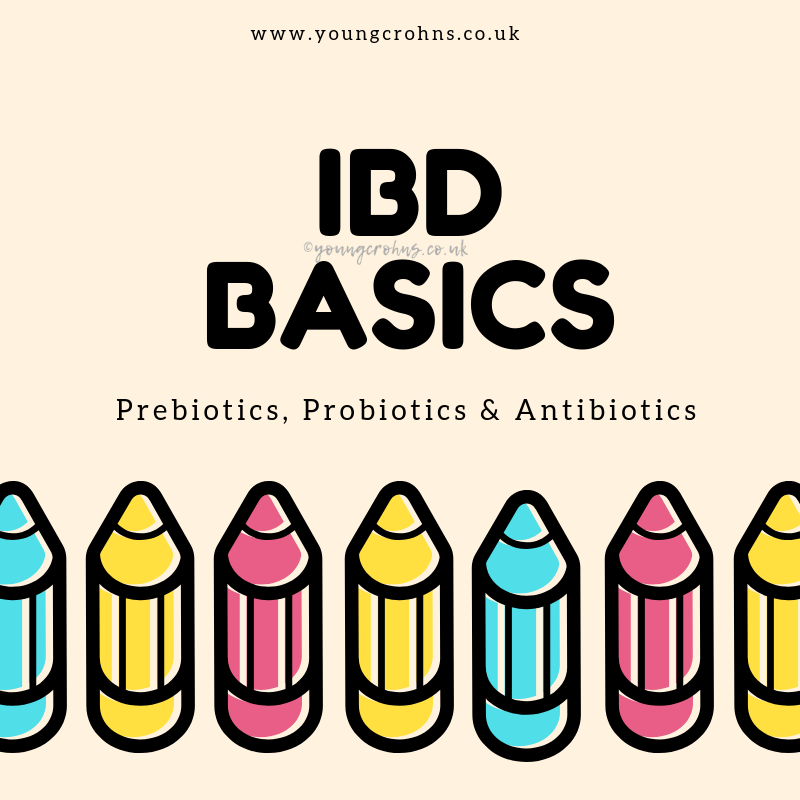 If you are looking for the entire ‘IBD Basics‘ series, you can find them all here.

Prebiotics are made up of carbohydrates that your body can’t digest. They exist purely as food for the probiotic bacteria that you’re putting into your body. The use of prebiotics and probiotics together is called microbiome therapy. You don’t need to take a prebiotic for probiotics to work, but taking them might make your probiotics more effective.

Probiotics are live bacteria and yeasts promoted as having various health benefits. They are thought to help restore the natural balance of bacteria in your gut (including your stomach and intestines) when it’s been disrupted by an illness or treatment.

It is believed that many people (not just those with IBD) have unbalanced gut bacteria – which may be due to a number of reasons. Some of these reasons include:

Probiotics given with antibiotics may also reduce the risk of developing a Clostridium difficile (C. difficile) infection. This a  potentially dangerous bacteria that can cause diarrhoea and life-threatening complications. It can infect the gut if the balance of gut bacteria is disturbed by antibiotics. Probiotics are thought to directly kill or inhibit the growth of harmful bacteria, stopping them producing toxic substances that can make you ill.

Probiotics can also help with pouchitis. When some ulcerative colitis patients need to have part of their bowel removed and a loop of bowel or ‘pouch’ constructed in its place. This can sometimes become inflamed, leading to diarrhoea and other problems. This is known as pouchitis. Some studies have shown that certain probiotic mixes available on prescription can help treat pouchitis.

Antibiotics are used to treat or prevent some types of bacterial infection. They work by killing bacteria or preventing them from reproducing and spreading. But they don’t work for everything.

Antibiotics are frequently used as a primary treatment approach in IBD, even though no specific infectious agent has been identified as the cause of these illnesses. However, researchers believe that antibiotics can help control symptoms of IBD by reducing intestinal bacteria and by directly suppressing the intestine’s immune system.

Although there are several antibiotics that may be effective for certain people, the two most commonly prescribed in IBD are:

Both metronidazole and ciprofloxacin are broad-spectrum antibiotics that by definition fight a wide range of bacteria. Metronidazole is the most extensively studied antibiotic in IBD.

Antibiotics are effective as long-term therapy in some people with IBD, particularly Crohn’s disease patients who have fistulas – abnormal channels between two loops of intestine, or between the intestine and another structures – or recurrent abscesses – pockets of pus – near their anus. And whilst helpful in people with Crohn’s disease, antibiotics are generally not considered useful for those with ulcerative colitis, either for maintaining remission or in acute situations.

Why are these important?

We are only just starting to understand the relationship between having a balanced microbiome and our health. As a digestive condition; IBD is frequently talked about in relation to our microbiome. As a result there are dozens of probiotic supplements and foods – which when ingested aim to populate your gut with friendly bacteria that you might be lacking in – some of which target people with IBD with a ‘fix’ to their imbalanced and inflamed digestive system.

There is increasing evidence that suggests intestinal microbiotics plays a role in initiating, maintaining and determining the characteristics and development of IBD1, 2. People who report success with probiotics have found a reduction in symptoms such as bloating, diarrhoea, fatigue, skin conditions – such as eczema – and constipation. Probiotics are increasingly being recognised to help people who have irritable bowel syndrome. Many people with IBD suffer from a degree of IBS too.

However, studies into the effectiveness of probiotics on people with IBD are limited. There have been a few studies into specific strains of bacteria and their effect on IBD and even fewer studies specifically testing probiotic products on IBD. The success rate varies from person to person and a probiotic that may produce results for one person may not do the same for another. If you choose to take a probiotic it is recommended you do so alongside any other treatment you are undergoing and that you discuss taking it with your doctor before starting.

I have, however been on antibiotics for my Crohn’s disease. This was not a primary treatment plan, but as a reaction to infections caught whilst recovering from flare ups and surgeries.

Have you had to take antibiotics for your IBD? Have you found them useful as a treatment option? Have you any experience with pre or probiotics?

The What and Why: Calcium

Side Effects of Medication: When to Call it Quits