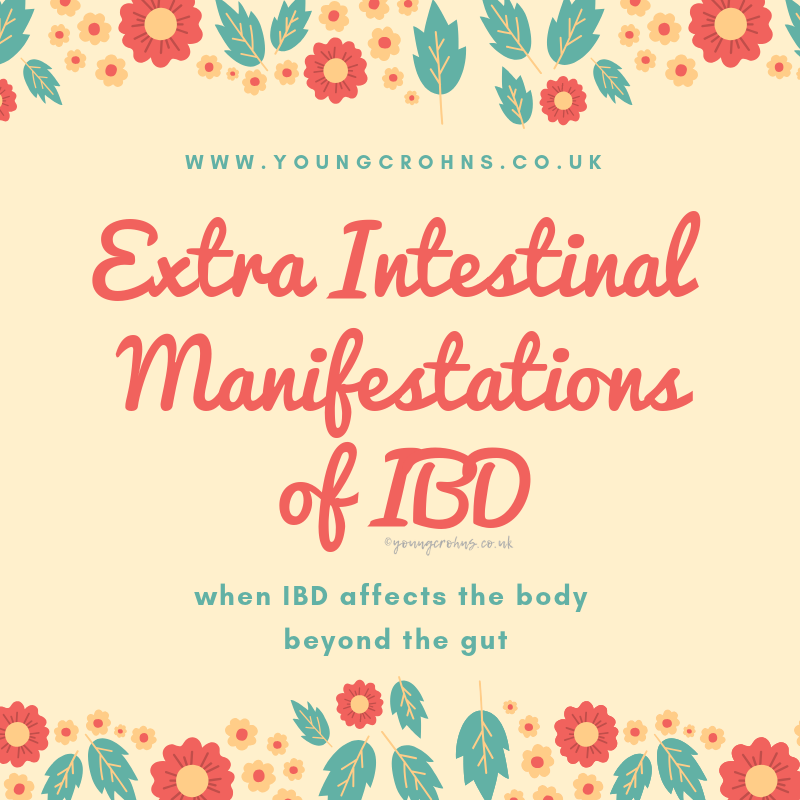 This new series has looked at the effects IBD can have beyond the gut. As a whole, extra intestinal manifestations of IBD occur when the disease is not controlled well enough with conventional medications. However, the side effects of particular medications can produce new symptoms which would mirror or mimic these extra intestinal manifestations (EIMs).

For all of the information provided within this series, I gathered resources and broken them down, putting them into patient speak. Each post came with a disclaimer too so if you had any concerns, you should see your specialist in all instances.

This ‘overview’ posts will look at how EIM’s look as an individual aspect of IBD care.

How likely are EIM’s and what can they be? *Conditions that have an equivocal or indirect association with IBD.

It is important to note, many of these are not very common.

Which EIM’s are ‘most common’ and why?

Extra intestinal manifestations associated with IBD, are often observed in those with Ulcerative Colitis or Crohn’s Disease. These manifestations may affect various organs and may develop before the onset of gastrointestinal symptoms. The EIM affect most often the joints (peripheral and axial arthropathy), skin (erythema nodosum, pyoderma gangrenous, aphthous stomatitis), eyes (episcleritis, uveitis) and hepatobiliary tract (primary sclerosing cholangitis (PSC)). Below shows the prevalence of each manifestations in IBD patients, as well as it’s location away from the GI tract.

Other organs and systems, such as lungs, kidneys, pancreas and venous system are less frequently affected by EIM. Some extra intestinal manifestations such as arthritis, Erythema Nodosum, Episcleritis and oral ulcers are associated with IBD activity. Other extra intestinal manifestations, such as Uveitis and Ankylosing Spondylitis have an independent course with activity of IBD. And finally, Primary Sclerosing Cholangitis (PSC) and Pyoderma Gangrenous may or may not be associated with the intestinal disease activity; incidences reported have occurred with and without IBD activity.

Among IBD patients approximately one-third have at least one lifelong EIM. The risk of presenting at least one EIM is between 6 to 47%. A history of perianal Crohn’s disease, colonic involvement and smoking are related to increased susceptibility to the development of extra intestinal manifestations. The presence of a prior EIM also appears to suggest a greater probability of developing other extra intestinal manifestations.

Why do these occur?

Back in 2011, when I first presented to A&E with issues with vomiting and diarrhea, my EN were missed. They suspected it was to be cellulitis and it would go away with antibiotics. It didn’t, and I came back to hospital twice more before I had a flexi-sigmoidoscopy to confirm my Crohn’s Disease. My EN were still present and described by one junior on my consultants team as being “something they don’t normally see with IBD diagnosis‘”.

Since then, I have flared twice in seven years and both times my EN came up. I might have been more aware of them, or that awareness of EIM’s has increased in those years, but this was treated promptly and effectively. The scarring faded after a couple of weeks of recovery, but has been my body’s warning system for a huge and problematic flare up.

My point here is, I am very glad of the research being done into all EIMs. Some get more attention as they affect more, some are more serious and others are rare enough to not been seen in the mass of IBD patients. But, still, awareness is going up. We – as patients – are being more involved in our care in the UK, thanks to the IBD Standards.

I am a firm believer in knowledge is power. Nothing about what I find out scares me, nothing makes me dwell on what I have and what could go wrong (well, almost all of the time, I have moments of slipping into a small circle of despair!) because I know I can flag issues before they become problems.

RSNA – Beyond the Bowel: Extra Intestinal Manifestations of Inflammatory Bowel Disease (May 2017)